For this month's task the youth board were asked to write a blog post about a piece of art that has either caused controversy or been banned in their country. Here are their personal viewpoints. 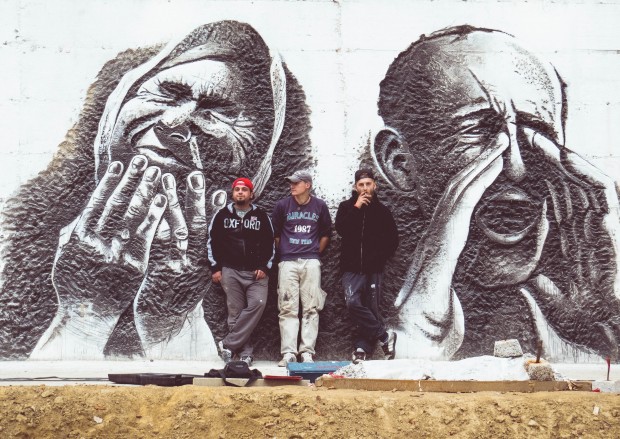 Artist collective HAD and their memorial for the victims of Srebrenica genocide. (Photo: Ilhana Babić)

This month, the Index Youth Advisory Board members were asked to write a blog post exploring their opinions on censorship in the arts by citing a case.

In the small town Visoko, Bosnia and Herzegovina, a square was opened on 5 October to commemorate the victims of Srebrenica genocide. The construction of the square has since been in the spotlight as a large number of citizens disapproved of it being built, seeing it as overpriced and unnecessary.

Local artist collective HAD, made up of Muhamed Hamo Bešlagić, Anel Lepić and Damir Sarač, decided to contribute to keeping the memory of the victims alive. They decorated a 35-meter long wall nearby the square with images of war victims, focusing on Srebrenica genocide victims. They went to the authorities and suggested their work, which they named Silence, and it was approved. The three of them, an architecture student, a painter and a street artist, chose to work for free, feeling the moral obligation to keep the memory of the victims alive for future generations.

Once they started working on carving the images into the wall, they faced objections from their fellow citizens. People were disgusted with what they saw, and many approached the artists while they were working, expressing their disapproval of having such images shoved in their faces.

The accusations continue, however HAD continue with their work. They said: “Every quality artwork has to have negative critiques and negative comments. We somehow maybe even prefer the negative ones, they often show a deeper understanding of the work, they show that people pondered deeply. Indifference is absent when it comes to Silence. Everybody has some kind of reaction. That was one of our goals — to make the images speak for themselves by remaining completely silent.”

Twenty years after the war it seems people still don’t want to face what happened. Many look the other way, people say they remember when all they want to do is forget. HAD decided that Srebrenica genocide will not be remembered only on 11 July and they carved their decision in a concrete wall. Showing the true power of art.

16 August 2015 marked the third anniversary of the Marikana massacre in South Africa, a day of remembrance in honour of the striking miners that lost their lives through lethal force by security forces in the country. It was an incident that reverberated worldwide and represented a black mark on South Africa’s progress as a democracy and a tragic consequence of the country’s increasingly rampant inequality.

Three years on, there is still no justice for the victims of the massacre, a group of anonymous artists under the banner of Tokolos Stencil Collective claimed responsibility for a series of graffiti and stencil statements on the campus of the University of Cape Town (UCT), indicating the University for its complicity in the massacre.

Statements such as “#RememberMarikana”, “non-poor only”, and “Max Price [UCT’s vice-chancellor] For Black Lives”, were framed as a form of protest against UCT’s investment in Lonmin, the mining company that owned the mine at which the massacre took place. Furthermore, it raised attention to the fact that judge Ian Farlam sits on the UCT Council while heading up the Marikana commission, the committee tasked with the official inquiry into the killings. His position and UCT’s investments are seen as a direct conflict of interest.

The university was quick to condemn the graffiti as an “irresponsible and inappropriate method of protest,” and many of the statements were removed within a week.

However, this was not enough to quell the discontent among the students. Despite the condemnation and removal, the graffiti exposed UCT’s investments in Lonmin and, as such, their association with South Africa’s darkest post-apartheid day.

Graffiti, in this manner, constitutes an appropriate and effective form of art and of protest. It is a tool through which the Tokolos Stencil Collective were able to express their right to freedom of expression and represent the dissatisfaction of the students with the actions of the university.

In the late 1970s, Maureen Murphy was found bleeding in her room, with a wastebasket near her that contained a dead baby, asphyxiated. Sister Maureen Murphy, who was a nun, denied giving birth and stated that she didn’t remember being pregnant. There was a trial, and she was found not guilty of all charges by reason of insanity.

This incident bears similarities to a play (which also opened on Broadway in 1982), Agnes of God, that portrays a pregnant nun contending that the child was the result of a virgin conception (immaculate conception), followed by an investigation, with the play focusing on exchanges between the nun in charge of the convent and a psychiatrist. The play did not attract any criticism, even after it had been made into a film and was shown all over the world. Over two decades ago, the play was performed in Mumbai, India, too, and was very successful. There were no objections.

An adaptation of the Broadway play was set to premiere in Mumbai on the 4 October 2015 but on the 30 September, the director of the play tweeted that the show was canceled, citing threats of arrest, imprisonment, harm to body and property as reasons behind the decision. The Catholics Bishops Conference of India and Catholic Secular Forum contended that it is a wrongful portrayal of the character of clergy and hurts religious sentiments, and jointly sought a ban on the play.

This move to get the play banned can perhaps be attributed to the increasing number of intolerant people impatiently waiting to be offended, coupled with the ease of getting things banned in India (be it on religious or moral grounds). The increasingly intolerant society is proving to be a major hindrance to the freedom of expression of individuals in India. I would like to end by quoting a few sentences from Justice Chinnappa Reddy’s judgment in a case concerning expulsion of children who were Jehovah’s Witnesses on the grounds that they refused to sing the national anthem: “Our tradition teaches tolerance; our philosophy preaches tolerance; our Constitution practises tolerance; let us not dilute it.”

In commenting on the decision to remove artwork from the Passion for Freedom art festival in London, I have rarely seen such an inexplicable and frankly ludicrous example of censorship in modern-day Britain.

The work in question, Isis Threaten Sylvania by artist Mimsy, is a satirical swipe at Isis and consists of seven scenarios featuring children’s toys as the Sylvanian Families. Depicting toy mice — or MICE-IS — it has been branded as “potentially inflammatory content”. The “contentious” point which has caused the hysterical reaction has been that in the backdrop to each scene, with the mice waving black flags and plotting to disturb the tranquil world of Sylvanian Families.

Perhaps the most farcical aspect of this entire story is that the artwork was due to be exhibited at an event specifically designed to reflect the full spectrum of artistic expression. The exhibition is designed specifically to give artists an opportunity to be provocative, open debate and exercise their freedom of speech. For the police to intervene on the simple grounds that the work is “potentially” provoking isn’t just ludicrous, it is dangerous and raises important questions about the scope of police powers in the world of art.

When we reach a point that art depicting toy to depict a terrorist threat is considered too dangerous for public consumption, one has to wonder what we are really fighting for. If this artwork offends to the point it is banned, then what separates us from the other side? We are either defeated by the enemy or we censor ourselves in this hysterical rush to prevent the potential of offending anyone.

After the board took the decision to remove artwork from the exhibition after facing a £36,000 security bill for the six day show.

Satire through art is meant to be humorous, but it has a purpose beyond this, often constructing genuine social criticism. If, due to the threat of intimidation and violence, individuals and organisations feel unable to express themselves then the notion of freedom of expression has very little meaning.

Art has a key place in our democracy in creating social criticism and generating political thought in individuals. It is interesting that a country which puts large amounts of public money into actively promoting art forms that would have a much smaller presence if left to the market is unwilling to put money into protecting its population’s right to express itself freely. Artists must be free to criticise and satirise religious extremists.