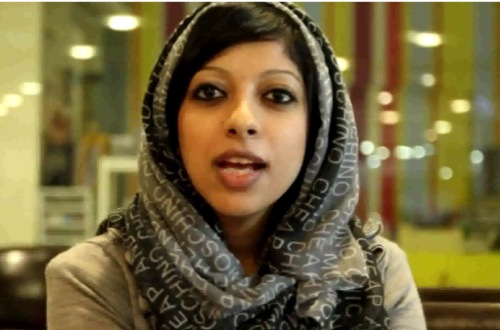 Bahraini human rights activist Zainab Al-Khawaja will appear before the Bahraini court of appeals on 21 October to hear its verdict on charges including ripping a picture of and insulting the king, for which she has been on bail since 2014.

Al-Khawaja, the daughter of Abdulhadi Al-khawaja, former president of the Index award-winning Bahrain Centre for Human Rights, faces nearly five years in prison if her appeal is rejected. Al-Khawaja was sentenced on 4 December 2014 — just days after giving birth to her second child — on four charges which include two months for ripping the picture of the king, one year for insulting a police officer, three years for insulting the king and nine months for entering a restricted area.

The Al-Khawaja family have been involved in Bahrain’s pro-democracy movement, making them targets for authorities in the monarchy. Zainab Al-Khawaja’s father, Abdulhadi, was sentenced to life imprisonment on 22 June 2011 for his peaceful human rights activities. Zainab’s sister Maryam Al-Khawaja has been acting president of the Bahrain Centre for Human Rights since the arrest of Nabeel Rajab, another high-profile activist who has been subjected to judicial harassment for expressing opinions.

A Thunderclap campaign has been launched urging people to wish her a happy birthday and call for her conviction to be quashed so that she and her year-old son don’t go to prison.

Al-Khawaja has thanked supporters on Twitter, saying “My love and respect to all the people of Bahrain who continue to sacrifice every day so that someday our children can be free. And thank you to all those who stand up and speak out on behalf of the people of Bahrain. You restore our faith in humanity.”