PRESS RELEASE
Drawing pressure: Cartoons go under the hammer in support of Index on Censorship 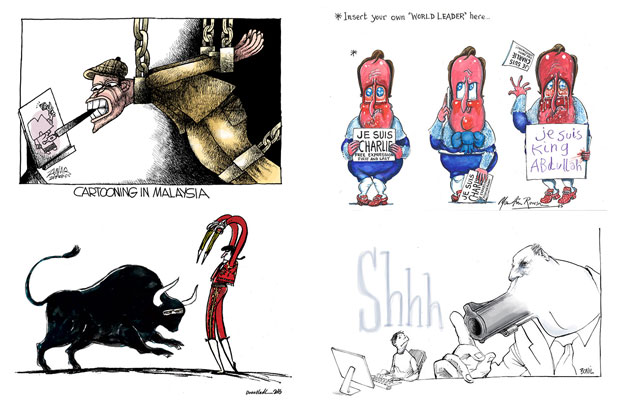 Index on Censorship is delighted to announce the auction of an incredible collection of cartoons that celebrate the power of art to challenge suppression. The auction will help fund our work supporting persecuted writers and artists worldwide.

Earlier this year, Index commissioned 10 of the world’s leading cartoonists to pen a work on the theme of free expression. The cartoons are powerful tributes to the role of art, drawn by world-renowned artists from every continent: from a US Pulitzer Prize winner to a Syrian cartoonist beaten in retaliation for his work.

Beginning Tuesday, 24 November 2015, bidders will be able to enter bids for hand-drawn artwork by:

Xavier Bonilla (Bonil) – Ecuador
Regularly denounced, threatened and fined, Ecuador’s Bonil has earned the title “the pursued cartoonist” for his work. For 30 years he has critiqued, lampooned and ruffled the feathers of Ecuador’s political leaders, in the process earning a reputation as one of the wittiest and most fearless cartoonists in South America.

Kevin Kallaugher (Kal) – United States
US artist Kal is the editorial cartoonist for The Economist and The Baltimore Sun and his work has appeared in more than 100 publications worldwide including Le Monde, Der Spiegel, The International Herald Tribune, The New York Times, Time, Newsweek, and The Washington Post. He has won numerous awards, including the 2014 Grand Prix for Cartoon of the Year.

Signe Wilkinson (Signe) – United States
The first woman to win the Pulitzer Prize for Editorial Cartooning, Signe has won several other awards for her work. She comments on topical political issues and is best known for her daily cartoons in The Philadelphia Daily News.

Jean Plantureux (Plantu) – France
Plantu is the chief cartoonist for France’s Le Monde and founder of Cartooning for Peace, a global network of cartoonists. This drawing is a rare, signed copy of the world-famous cartoon Plantu drew for Le Monde the day after the attack on Charlie Hebdo.

Martin Rowson – UK
A former Cartoonist Laureate, political satirist Martin Rowson contributes cartoons to The Guardian and the Daily Mirror as well as Index on Censorship magazine. His work has earned him several awards, including the prize for the Best Humour and Satire Book of the Year at this year’s Political Book Awards.

Ali Farzat – Syria
Ali Farzat, a former Index on Censorship Freedom of Expression Award winner, came to global attention in 2011 when he was pulled from his car and beaten by Syrian security forces who broke both his hands. When Kuwaiti authorities closed the offices of his newspaper, Al-Watan, earlier this year Ferzat was forced to buy new materials and redrew this cartoon for us from scratch.

Doaa El Adl (Doaa) – Egypt
Doaa is a celebrated female artist in the Arab world – well know for her fearless political work. She has often tackled freedom of speech, human rights and women’s rights issues, wining numerous awards as well as controversy and even charges of blasphemy for her work.

Zulkiflee Anwar Haque (Zunar) – Malaysia
Zunar is an award-winning Malaysian political cartoonist who has been repeatedly targeted by authorities. Five of his cartoon books have been banned by the Malaysian government for carrying content “detrimental to public order” and thousands confiscated. He is currently facing up to 43 years in jail for mocking the government.

David Rowe – Australia
A three-time winner of the Stanley Award for Australia’s Cartoonist of the Year, David Rowe has worked for the Australian Financial Review for 22 years. Rowe’s bright and colourful watercolours are famously merciless.

The auction is being hosted by Givergy.

One response to “Drawing pressure: Cartoons go under the hammer in support of Index on Censorship”