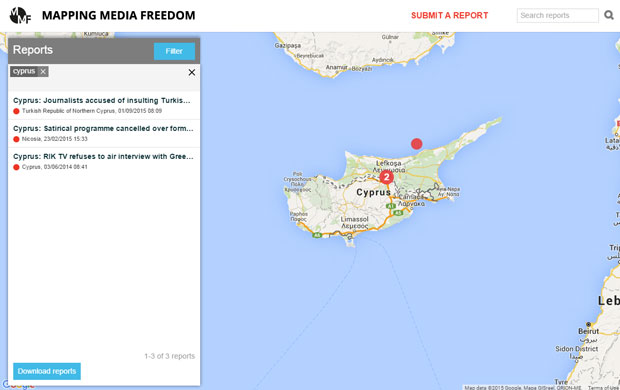 Turkish Cypriot daily Afrika reported on 30 August 2015 that the Turkish military forces in Cyprus had accused the paper of being against “the army and the flag”. Afrika’s articles had allegedly offended Turkish forces and made “people alienated from the army”, according to the case.

Editor-in-chief Sener Levent and writer Mahmut Anayasa, both of whom had shared an Afrika article from July on social media, were called to the prosecutor’s office for questioning. According to Costas Mavridis, a Greek Cypriot Member of the European Parliament, this is not the first time Levent has faced accusations. Both were later released.

After the questioning of Levent and Anayasa, Mavridis asked the European Commission about what actions are to be taken in order to protect the two European citizens.

“This action is clearly against human rights, specifically freedom of expression,” Mavridis said. He added that the only way for them to be safe is by making their case known to international and European public opinion, which is why he is proposing that Levent should be the Cypriot candidate for the European Citizen Prize 2015. “Sener Levent’s uninterrupted struggle for freedom of expression is a brave stance in favour of fundamental principles of the European culture at the risk of his life,” Mavridis said.

Yurdakul Cafer from the Association of Turkish Cypriot Journalists, speaking to Index on Censorship, stressed that, “media and the press in Northern Cyprus enjoy freedom of expression to a large degree”.

Before the opening of Afrika, Levent was to be the editor-in-chief of one of the first pro-European newspapers in Northern Cyprus, Avrupa, which means “Europe” in Turkish. According to a statement by the International Federation of Journalists (IFJ) from November 2000, the daily Avrupa was firebombed. “Extensive damage was caused and the printing house is no longer operating,” according to statement.

The IFJ had also noted that the attack “followed a period of court fines and official harassment designed to try to close down the newspaper”. Levent and other journalists were at the centre of these legal measures. As a result, the newspaper folded and was replaced by Afrika few years later.

The 2014 Freedom House report states that overall the situation of the media in Northern Cyprus is “free”. “Some media outlets are openly critical of the government,” it writes, although “in recent years some journalists who espouse anti-government positions were physically attacked, apparently by members of nationalist groups”.

“There were no such incidents in 2013,” the report concluded.

Cafer, who is also a news editor at Bayrak Radio Television, said that “despite Ankara’s strong political and military presence in the Turkish Republic of Northern Cyprus, Turkish Cypriot newspapers, TV and radio stations are exceptionally democratic and open to discuss sensitive public, social and economic issues”.

The 2015 World Press Freedom Index placed the territory at 76 for media freedom in the world. Cyprus was ranked 24 in the world for press freedom. Turkey, which Northern Cyprus depends on, ranked 149 and continues to have high levels of violations against media, according to verified reports logged to Index on Censorship’s Mapping Media Freedom project.

Cafer said that Levent “was taken to court on charges of espionage but the charges brought against him were not for what he wrote,” adding that “he has been released”. “If there is no trial or if you are not jailed then I don’t think that’s persecution. There is no pressure or persecution in TRNC,” Cafer said, claiming that a lot has changed since the 1996 assassination of Kutlu Adali.

Adali, a journalist for the Northern Cypriot newspaper Yeni Duzen, was fatally shot outside his home. According to Mavridis, before Adali’s assassination he had announced his willingness to reveal some facts about the government’s immigration policies, specifically the Turkish settlers in Northern Cyprus. “Adali’s murder was a dark chapter in this country’s history, but there is no other incident like this one and that Turkey or TRNC does not exist anymore,” Cafer told Index on Censorship.

Overall, Cafer is optimistic about the future of media freedom in Northern Cyprus, while he points out that “the biggest problem and threat to peace and reconciliation in Cyprus” could be “online media”. “Many online news outlets,” he explained, “have popped up and many of them disregard the main principles of journalism or any code of ethics, spreading misinformation or doing more harm than good. I think we need more legislation that protects good journalism, not legislation that curtails freedoms,” he concluded.

However, Mavridis, using a phrase from another Turkish Cypriot journalist, who was prosecuted and threatened many times in the past, stresses that “even when a bird flies in Northern Cyprus, it’s with the permission or the tolerance of the manager of the Turkish occupying forces”.

This article was posted on 18 November 2015 at indexoncensorship.org