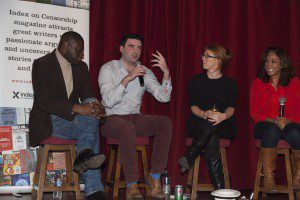 “When I went to the Loaded offices with hairy legs they told me to get out and that I could never be on the cover of the magazine because apparently I’d made an effort with my nails but not my legs,” said comedian Shazia Mirza, at the launch of the latest taboo-themed issue of Index on Censorship magazine.

Do taboos still exist in society today? Are taboo subjects still brushed under the carpet instead of being faced head on? Is comedy a perfect platform to tackle these issues? These were just some of the questions discussed during the evening of discussion and debate.

The night kicked off with a fast and furious comedy performance from Michele Moran, filled with tales of taboos and secrets.

Wind-Cowie told the audience at the Royal Vauxhall Tavern of his surprise when people reacted to Rupert Murdoch and Jerry Hall’s marriage with jokes and disgust at the thought of older people having sex. 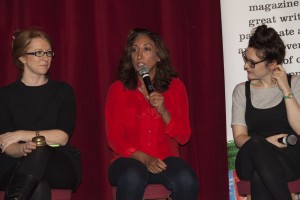 He said: “I think it’s a bit sad because I hope to be an older person one day, and I hope that the older person that I will become will be allowed to have sex with someone. And I hope that when we are having sex they won’t be looking at me and thinking ‘my God you’ve got disgusting’. So I think it’s wrong that it’s something we all laugh at so much.”

Maguire joked to the audience that mental illness was a requirement as a comedian but agreed there was still a lot of stigma around mental health.

“In certain careers you’re supposed to be macho and mental illness is still seen as a sign of weakness. I just think that’s really depressing and sad. I think you should be allowed to be vulnerable, but I don’t think were there yet,” she said.

The panel moved to discussing whether suicide and grief were taboo in different societies. Mirza said: “Some Muslims believe that suicide is wonderful. You blow yourself up and go into the afterlife where there are virgins and wine. So it may be terrible in the West but to Muslims suicide is great, and we talk about it all the time.”

Olulode told the audience how for him the last taboo was racism. “In terms of race, there’s a lot of discussion about the discrimination and the attitudes towards black people, but we rarely discuss the construction of what it is to be white.”

He said: “There’s an old left-wing saying: ‘Nothing is alien to me.’ And that idea of investigating every aspect of humanity seems to have become lost along the way. The contestation of ideas in society today is more about protecting people from being exposed to difficult subjects or ideas than actually tackling them head on.”

The evening was rounded off with a lively taboo disco set from DJ Bamboo.