A discussion followed by music, presented by Index on Censorship, will make a taboo-busting evening at London’s best alternative venue 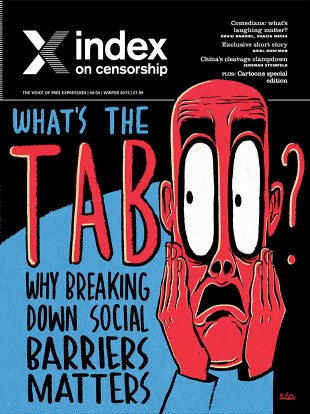 The winter 2015 issue of Index on Censorship magazine, focusing on taboos. Cover image by Ben Jennings

Join Index on Censorship for a taboo-busting evening at London’s best alternative venue – the Royal Vauxhall Tavern – to celebrate the launch of What’s the Taboo? – Index’s latest magazine featuring stories of the most controversial subjects from around the world.

Following the panel event stick around for a special DJ set – Taboo Disco!

More on the speakers:

Shazia Mirza is an award-winning comedian and columnist. TV Appearances include: Have I Got News For You, F*** Off, I’m a Hairy Woman, NBC’s Last Comic Standing and Richard and Judy. In 2008, she was listed in The Observer as one of the 50 funniest acts in British comedy and won the GG2 Young Achiever of the Year Award. Her current show The Kardashians Made Me Do It is on tour at the moment.

Kunle Olulode is director of black campaigning infrastructure charity Voice4Change England. He is also a film historian and exhibitor and part of the BFI’s African Odyssey programming team.

Max Wind-Cowie is a writer and political consultant. He previously ran the Progressive Conservatism project at the thinktank Demos and has written for newspapers including The Guardian, and the London Evening Standard.