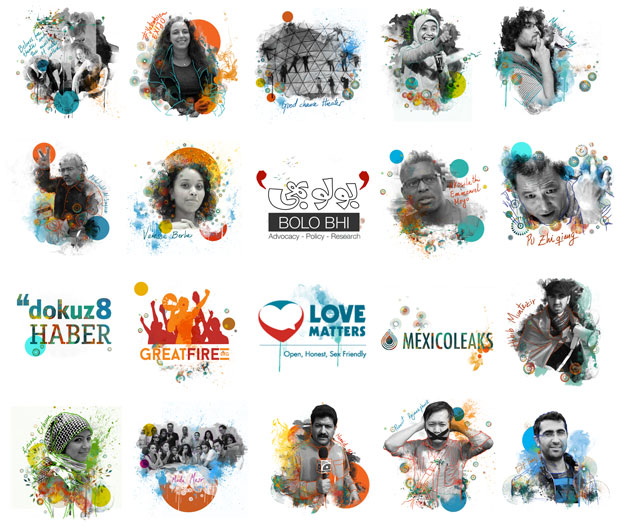 An Aleppo-based journalist training women to report on the crisis in war-torn Syria, an Indonesian comic who jokes about Islamic extremism and a 19-year-old campaigner against repression in Eritrea are among those shortlisted for the 2016 Index on Censorship Freedom of Expression Awards.

Drawn from more than 400 crowdsourced nominations, the Index awards shortlist celebrates artists, writers, journalists and campaigners tackling censorship and fighting for freedom of expression. Many of the 20 shortlisted nominees are regularly targeted by authorities or by criminal and extremist groups for their work: some face regular death threats, others criminal prosecution.

“Censorship is not something that happens ‘somewhere else’,” said Jodie Ginsberg, CEO of Index on Censorship. “It occurs on a daily basis in every country, in every part of the world. The shortlist honours those who are among the bravest and most creative in tackling such threats.”

Nominees include Good Chance Theatre who work in the infamous “Jungle” refugee camp in Calais, France; imprisoned Bahraini academic and blogger Dr Abduljalil Al-Singace, who has continued to protest in prison despite being subjected to torture and abuse for daring to speak out on human rights abuses in his country; GreatFire, an anonymous group that battles China’s severe web censorship; and Pravit Rojanaphruk, a veteran reporter who was arrested, interrogated and forced out of his job for criticising Thailand’s military government.

Other nominees include Zaina Erhaim, who returned to her native Syria to report on the conflict and train women to tell unreported stories; Sakdiyah Ma’ruf, a female Muslim stand-up comedian from Indonesia; and campaigner Nkosilathi Emmanuel Moyo, a Zimbabwean who fights corruption in his country, currently in hiding after sending Robert Mugabe a prison uniform for his 92nd birthday this month.

Winners, who will be announced at a gala ceremony in London on 13 April, become Index on Censorship Freedom of Expression Awards Fellows and are given support for their work.

“How do you fight for free expression beyond a moment? How do you keep it alive? You must remember how stressful it is for people on the ground. This fellowship, following us for a year, it is a good idea,” said Rafael Marques de Morais, Freedom of Expression Award winner for Journalism in 2015.

For more information, or to arrange interviews with any of those shortlisted, please contact: David Heinemann on 0207 260 2660. More biographical information and photos of the nominees are available at awards.indexoncensorship.org

Index on Censorship Freedom of Expression Awards nominees 2016
Arts
Belarus Free Theatre and The Ministry of Counterculture (UK/Belarus)
Ten-year-old Belarus Free Theatre has been using their creative and subversive art to protest the dictatorial rule of Aleksandr Lukashenko for a decade
Tania Bruguera (Cuba)
American-Cuban artist Tania Bruguera, who uses art to campaign for greater openness in Cuban society, was arrested after attempting to stage her play #YoTambienExijo at a festival in Havana. It is now a global movement
Good Chance Theatre (UK)
Good Chance works in the infamous Jungle refugee camp in Calais, France, to provide a space for refugees to express themselves
Sakdiyah Ma’ruf (Indonesia)
Sakdiyah Ma’ruf is a female Muslim stand-up comedian from Indonesia who challenges Islamic fundamentalism and advocates for women’s rights
Murad Subay (Yemen)
Artist Murad Subay uses his country’s streets as a canvas to protest Yemen’s war, institutionalised corruption and forced “disappearings”

Campaigning
Abduljalil Al-Singace (Bahrain)
Dr. Abduljalil Al- Singace is an imprisoned Bahraini human rights activist, academic and blogger who has not let prison stop him from calling attention to his country’s human rights practices
Vanessa Berhe (US)
University student Vanessa Berhe is fighting for the release of her uncle, Eritrean journalist Seyoum Tsehaye, and for freedom of expression in Eritrea, one of the world’s worst most censored countries
Bolo Bhi (Pakistan)
A women-lead digital rights campaigning group who have orchestrated an impressive effort to turn back the Pakistani government’s draconian attempt to censor the internet
Nkosilathi Emmanuel Moyo (Zimbabwe)
Prolific author and activist Nkosilathi Emmanuel Moyo campaigned against political corruption and worked with young people to foster human rights
Pu Zhiqiang (China)
A human rights lawyer who represented Ai Weiwei, Pu Zhiqiang has been targeted by China’s authorities for his unwavering support of free speech

Journalism
Zaina Erhaim (Syria)
One of the few female journalists still reporting from Syria, Zaina Erhaim of Aleppo works to train women to tell the story of the war-ravaged country
Mada Masr (Egypt)
Mada Masr is an independent news cooperative launched to offer an alternative narrative to government-controlled media
Hamid Mir (Pakistan)
Hamid Mir, a television journalist whose 30-year-career has been punctuated by threats, physical assaults, abductions and assassination attempts for taking on unchallenged powers in Pakistan
Pravit Rojanaphruk (Thailand)
Pravit Rojanaphruk is a veteran reporter who was arrested, interrogated and forced to resign for speaking out against Thailand’s lèse majesté law and military government
Ferit Tunç (Turkey)
Ferit Tunç is a Kurdish journalist who set up an independent newspaper in eastern Turkey and used inventive methods including publishing recipes with hidden messages to challenge censorship of his reporting on corruption