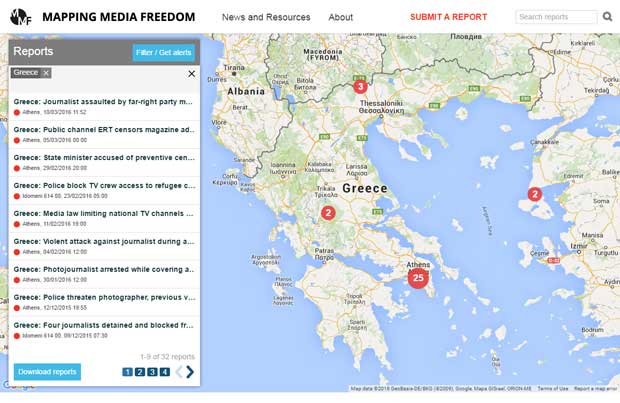 As the Greek government prepares to open a public consultation on the tender for new broadcast licenses, the country’s private TV owners have escalated their criticisms of a controversial new media law passed on 11 February.

The law aims to regulate the country’s media market and includes a competitive bidding process for limited private broadcast licenses. Nikos Pappas, the minister responsible for its implementation, announcedat a Syriza party meeting on 23 March his intention to launch the open international bid after the public consultation.

The changes will not affect the country’s public broadcaster ERT.

Panos Kyriakopoulos, president of the Association of Private TV Stations of National Range (EITISEE), criticised the government’s move, pointing out that the industry group was only invited to discuss the proposed legislation late in the process, when the draft bill had already been approved by a parliament committee. He added that EITISEE would appeal to the Greek Council of State and has already contacted the relevant EU agencies.

While broadcast television licensing has not been harmonised at an EU level, the changes to the Greek broadcast regime are being driven by the financial bailout. Under the rescue package, a European Commission spokesperson confirmed that Greece had committed to launch an international tender for broadcasting licenses.

From the Syriza-led government’s point of view, the new licensing process will bring order to broadcasting environment and fight corruption. Political opponents see the licensing regime as an attempt to take full control over the country’s media.

“We want financially viable media, because if this is not the case, they end up with financial holes and large loans, putting pressure on the political system to intervene in banks,” said Pappas.

Kyriakopoulos claims that whatever is being said about EITISEE member’s finances is “lies”.

“Our members do not have a euro of arrears to the state budget, the social security funds and the banks,” Kyriakopoulos told Index on Censorship. “Moreover, no loan does belong to the category of red loans.”

However, not everyone agrees with Kyriakopoulos.

“In our country the private TV channels have dominated the media environment for 25 years without ever having been given licenses and under a provisional legal status. Regulation is not only necessary but it’s a precondition for the smooth functioning of the market,” said Matina Papachristoudi, a journalist with the magazines Digital TV Info and Hot Doc, and a blogger at mediatvnews.gr.

For its part, EITISEE said that after the transition from analog to the digital age, the licensing framework has changed as in other European countries. “The TV channels do not have frequencies anymore,” Kyriakopoulos said. “It’s the network provider which has been given the frequencies, and this is Digea, following an international tender.”

According to Papachristoudi, non-authorised stations are “clients” of Digea, a digital network operator.

The main fight between the government and the Greek private TV is over the number of licences to be sold. Currently, eight national TV channels are operating in Greece. The new law allows for only four. Based on research from the University Institute of Florence, the government maintains that only four channels are viable.

“This is unprecedented for a democratic state where the open market is established,” Kyriakopoulos said. “The government cannot impose how many licences will be allowed within a sector, based on a revenue approach; the open market regulates this.”

“The issue will be judged in the supreme court, to which the channel owners will appeal,” Papachristoudi said. “Personally, I think it is not a restriction on freedom of expression, but an attempt to control the broadcasting landscape under new conditions.”

Most controversially, the government has decided to conduct the international bidding process itself, rather than have the National Council for Radio and Television (NCRTV), Greece’s independent regulatory authority, run the tender. NCRTV is designated by the Greek constitution as the body responsible for such a process.

Kyriakopoulos said this “abolishes the independence of the press” and accused the government of creating a “kind of oligopoly with few stations”, which are easily “manageable” and “better controlled … either through the distribution of state advertising or by threatening to pull their licences, if they do not obey the requirements imposed”.

The government opted to oversee the process due to a deadlock with the major opposition party in parliament over the appointment of NCRTV board members. The Greek prime minister, Alexis Tsipras, accused the dominant opposition party of wanting to “cancel the contest”.

“Mr. Mitsotakis is a hostage to the various interests and the TV contractors and denies the consensual establishment of the NCRTV,” the prime minister’s office said in a statement. “His aim is to cancel the contest, and those who had for so many years a free use of public frequencies, not to pay anything.”