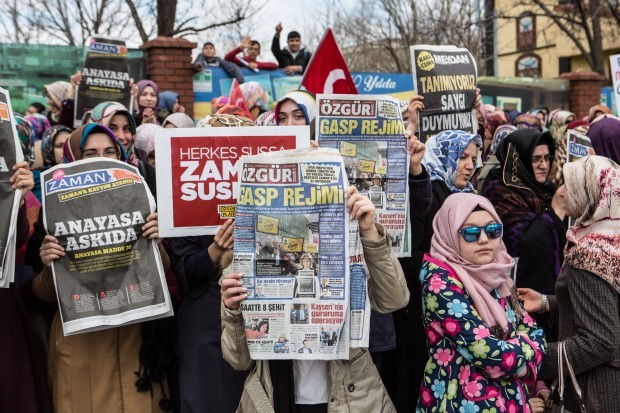 This column was originally submitted to Today’s Zaman, but was rejected by the new management. Yavuz Baydar was a columnist for Today’s Zaman since its launch on 15 January 2007

Following the presidential attacks on Turkey’s top judicial body, the Constitutional Court, stemming from its pro-freedom ruling over the case of Can Dündar and Erdem Gül of Cumhuriyet, and the unplugging two opposition channels from Türksat satellite, the dramatic seizure of Zaman and this newspaper, Today’s Zaman, both highly influential in their own ways, is one of the final nails in the coffin of journalism in Turkey.

Any other attempt to blur the discussion, or to divert the attention elsewhere, as “none of this has to do with journalism” is sheer nonsense, serving the government’s interests.

Neither is there any doubt that there is absolutely no difference at all in the huge mess of media crackdown in Turkey, in essence, say, between Cumhuriyet and Zaman, or Kurdish IMC-TV or right-wing/nationalist Bengü TV.

“Erdogan’s crusade is not just against a specific group or ideology. Whoever dares to criticise him is a potential target. After the fall of the largest critical newspaper Zaman, it is now even harder to speak about media freedom in Turkey,” wrote my esteemed colleague, Selçuk Gültaşlı, a veteran correspondent with Today’s Zaman, in Brussels.

As with much else directed at outlets and individuals in various, often opposing parts of the Turkish media, the legal basis for the seizure is, to say the least, is not “convincing”.

As the editorial by the Platform for Independent Journalism, P24 pointed out yesterday:

“It is no secret that Zaman demonstrated fidelity to the movement associated with the exiled cleric, Fethullah Gülen. The paper once supported the rise of AKP but in recent years has been a bitter critic. The legal document, which placed Zaman’s parent company into court-appointed administration, relies on the testimony of an anonymous witness who maintains that the editorial policy was dictated by what it calls the Fethullah Terror Organisation (FETÖ in its Turkish acronym). This, in turn, is guilty of conspiring with the outlawed PKK.  It is enough to point out that the existence of FETÖ is at best hearsay, at worst the invention of subeditors in the pro-government press – never mind that Zaman itself once took a more hawkish line towards the PKK than the government itself.”

There seems to be absolutely no doubt, either, what the most serious and most respected international news outlets see behind the attempts to completely silence what remains of critical media segments of Turkey, regardless of their political inclinations and editorial lines.

“If the Zaman affair were the only example of the mistreatment of the media in Turkey, it might be seen as part of the murky struggle between the AKP and Hizmet,” The Guardian wrote in its editorial. “But that is far from the position. Journalists of every kind are routinely intimidated, threatened with legal action and detained. Publications and broadcasting organisations have been put under extreme pressure to sack columnists whom the government dislikes. Some have been bought out by businessmen close to the government.”

“The editor-in-chief of the opposition paper Cumhuriyet and its Ankara bureau chief were charged with espionage after the paper printed a story suggesting that the government was conniving at the supply of arms to extremist rebels in Syria. When the country’s highest court ordered their release pending trial, Mr Erdoğan, with typical disregard for the legal system, announced: “I do not abide by the decision or respect it.”

“… Mr Erdoğan’s personality is not suited to any kind of adversity. The increasingly frequent use of a law making it an offence to insult the president shows him at his most thin-skinned…. Whether in dealing with the media or the courts, or even with the public, Mr Erdoğan’s message seems to be the same: there will be consequences if you cross me. This is not mature politics and it is certainly not democratic.”

Not much more to add.

The seizure of Zaman and TZ, along with the preceding series of attacks on the press from all possible fronts, has left Turkish journalism in a wreck. A key profession is now on its death-bed, mourned desperately by its courageous devotees. The “civilized world” just watches, as the dreams of a Turkish democracy passes away along with it.