NEWS
Why is academic freedom important? 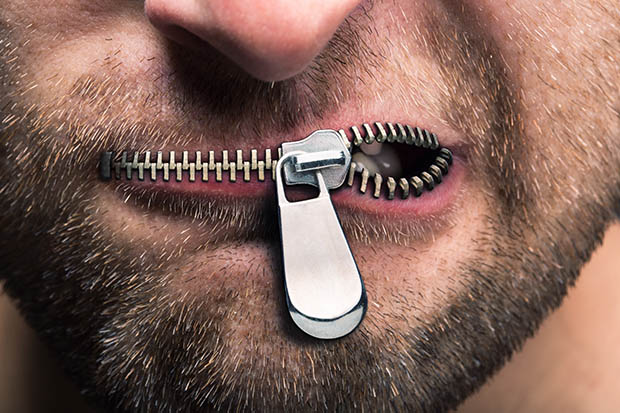 Academic freedom has been the subject of many debates in recent months. With speakers regularly being no-platformed, and increasing violations of safe space, universities and student unions across the UK have faced harsh criticism.

This growing trend of banning speakers from debates rather than confronting their views head on has led to calls for reforms in university policies in protecting academic freedom and so-called “safe space”.

When human rights activist and ex-Muslim Maryam Namazie was invited by the Atheist, Secularist and Humanist Society (ASH) to speak at Goldsmiths University in December 2015 she faced heckles and interruptions from students who opposed her views.

Throughout Namazie’s talk about blasphemy and apostasy members of Goldsmiths University’s Islamic Society (ISOC) caused a disruption by laughing, shouting out and even switching off her presentation, leading to some students being removed by security.

Namazie spoke to Index about the importance of academic freedom, stating: “Universities have always been hotbeds of dissent and progressive politics. They are places where anything can and should be discussed and debated – where deeply held sensibilities and beliefs can be reviewed, opposed and challenged.

“If you can’t express yourself on a university campus, doing so off-campus is usually even harder. Where academic freedom is restricted, it is a measure of the limits of free speech in society at large.”

Speaking about the Goldsmiths incident, Namazie refuses to be intimidated. She believes those pushing the Islamist narrative want to prevent a counter-narrative on university campuses and therefore it is more important for her to go and speak on any campus she is invited to and to push to be allowed where she is denied access.

“My family fled the Islamic regime of Iran in order to live freer lives. Therefore, it’s especially important for me to speak up, particularly given how many face imprisonment or lose their lives in doing so. I feel I have an added responsibility to speak for those who cannot,” she told Index.

In September 2015 Namazie was invited to speak at Warwick University by the Warwick Atheists, Secularists and Humanists’ Society, but her invitation was withdrawn by the University’s Student Union, who claimed her views would “incite hatred on campus”.

Other activists including Germaine Greer and Julie Bindel have also been silenced on campuses for their controversial views.

Namazie believes no-platforming is having a chilling effect on students’ academic freedom. She told Index: “These policies equate speech with real harm and violence though clearly there is a huge distinction between speech and action. Criticising Islam and Islamism, for example, is not the same as attacking Muslims. Nonetheless, I have been accused of ‘inciting violence’ or ‘inciting discrimination’ against Muslims.”

Human rights activist Peter Tatchell was involved in a dispute in February after National Union of Students’ LGBT representative Fran Cowling, declined to attend an event at the Canterbury Christ Church University at which Tatchell was giving a keynote address and participating on a panel.

He told Index: “Academic freedom is a crucial element of a free and open society. The right to explore, research, articulate, debate and contest ideas — even disagreeable ones — is a democratic hallmark.

“Imposing restrictions is the slippery slope to authoritarianism. As well as diminishing the realm of knowledge and understanding, it reinforces conformism and the status quo; putting a break on dissent and innovation.”

Right2Debate are a student-led movement who are campaigning for an end to censoring and no-platforming in universities by calling for student unions to reform their policies contesting rather than removing divisive and extremist narratives.

The movement, which has 100 student activists across 12 different UK universities and a further 3000 signatures of support, are aiming to have their four-point policy implemented by student unions across the UK. The policy’s outcomes include debate taking place over censorship, uncontested platforms for extremist speakers and transparency in the way the student unions conduct external speaker policy and challenging extremist/divisive narratives.

Haydar Zaki, Quilliam’s Outreach Right2Debate programme coordinator, told Index: “We are in this hostile environment to free speech because of the fruitless terms that have been employed at universities which include safe spaces and duty of care. In reality, these terms are completely open to interpretation, and have led to the chaos we see today whereby speakers are banned (or initially banned) at one university, but then freely allowed in others.

“What student unions and universities need to do is actually start implementing policies that are transparent and uniform — emphasising academic rights and the right to challenge over censorship.”

Bigoted ideas in society need challenging. To do so students require an academic environment that is willing to have open and civil discussions on all types of ideas, including those that could be deemed offensive, believes Benjamin David, an editor at Right2Debate. 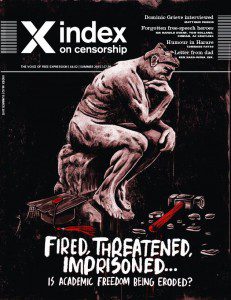 The summer 2015 issue of Index on Censorship magazine which focuses on academic freedom. Subscribe here to get your copy.

Professor Chris Frost, former head of journalism at Liverpool John Moores University, agrees. Frost believes academic freedom is important for new ideas to be explored. He told Index: “Academic freedom is critical as it allows academics to investigate matters that may be generally considered socially unacceptable simply because there has been no previous investigation. We cannot expand knowledge and understanding if we don’t challenge socially accepted concepts and seek proof to support our theories. Preventing academic research leads to a stifled society and one that will eventually destroy itself through its own limitations.”

Academic freedom is a regular topic for debate for the Index on Censorship Youth Advisory Board, a group of young professionals who meet up for monthly online meetings to discuss current free speech issues. The board spoke to Index about why academic freedom is important to them.

Board member, freelance journalist and race, ethnicity and conflict Masters student, Layli Foroudi, told Index: “Academic freedom is important to me because the purpose of research and study should be to investigate reality, to seek to shed light on some aspect of life, or “truth” — and most importantly, to challenge other people’s truth claims. If there is no academic freedom then there will only be a narrow view of reality that is being purported and left unchallenged.”

Mark Crawford, a postgraduate student specialising in Russian and post-Soviet politics at University College London and current board member, added: “As a historian, it always seemed to me that academic freedom was the closest anyone can really get to ideas breaking down monopolies of power -– hard, scientific investigation can cut through the emotions around nationalism or religion, and afterwards you’re left with truths that however inconvenient are always extremely necessary for new and better narratives to be built.”

This article was updated on 3 May 2016. Corrects to clarify the nature of the dispute over Peter Tatchell’s appearance at Canterbury Christ Church University.

Why is freedom of speech important?