NEWS
Difference Day: Should we celebrate or mourn press freedom? 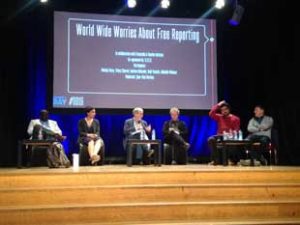 This week’s Difference Day conference in Brussels was all about celebrating press freedom. “Should we instead mourn press freedom?” asked Jean-Paul Marthoz, EU correspondent for the Committee to Protect Journalists.

Journalists and media professionals from across the world attended the World Press Freedom Day event at the Bozar Centre for Fine Arts on 3 May.

Patry drew attention to the work of those who fight to protect press freedom. She said although she can understand the position of “pessimists among us today”, having “a day to celebrate journalism and the free press already shows that we are attached to the idea that we need to support and protect the standards of journalism across the world, and highlight the work of journalists who are imprisoned and even killed for reporting the news”.

Conflict journalist Rudi Vranckx was less optimistic. He told of how every translator he worked with in Iraq, Syria, Gaza and Egypt has since been forced to flee their home.

Vranckx’s concerns were shared by Maksour who, holding a sign with the Aleppo is burning hashtag, highlighted the situation in Syria, stating that 15 civilians had died there on that morning alone.

“You can’t find a foreign journalist out there because it is very dangerous – they will be arrested or be killed,” said Maksour, adding that the situation prevents us from seeing the real picture of what is going on in Syria.

The debate focused on ways to counter propaganda with information that is readily and safely available for anyone, so that people can make up their own mind.

“People, of course, should have access to as wide a range of information as possible, but what’s continually important is for them to have critical understanding to be able to tell the difference between a fabricated, exaggerated, poorly sourced story and what is a credible news source,” Donde said.

Patry, agreeing with Donde, suggested people shouldn’t necessarily believe everything they see on the TV. “Journalists doing a good job, verifying sources, and verifying information is also part of improving the wider environment for press freedom and pluralism in Europe,” she added.

Difference Day showed that press freedom never comes without challenges. It may be time to ask ourselves seriously: is it time to mourn or celebrate?

One response to “Difference Day: Should we celebrate or mourn press freedom?”