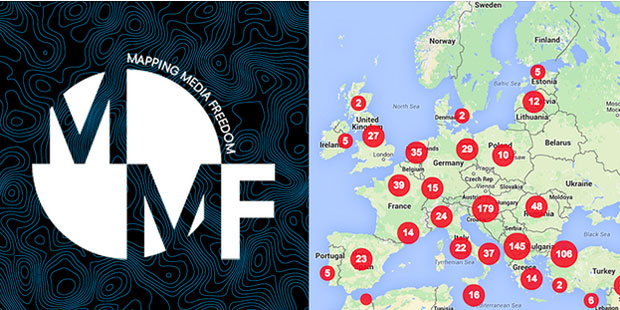 Journalists have been murdered and burned in effigy. Reporters have been publicly discredited by government officials, prosecuted for under anti-terrorism laws and excluded from public meetings on the refugee crisis. We’ve even recorded journalists being menaced with mechanical diggers.

Mapping Media Freedom launched to the public on 24 May 2014 to monitor media censorship and press freedom violations throughout Europe. Two years on, the platform has verified over 1,800 incidents, ranging from insults and cyberbullying to physical assaults and assassination.

“The original impetus behind the project was to uncover everyday attacks on press freedom in Europe. The database has given Index, its partners and policy makers a highly unnerving look at the ways journalists are barred, attacked or even murdered simply for doing their jobs,” Hannah Machlin, project officer for Mapping Media Freedom, said.

The project has been granted renewed funding by the European Commission.

“The strength of Mapping Media Freedom is that it provides an ongoing narrative about the state of press freedom in the European region. It is gratifying that the European Commission values its contribution to the project by renewing its funding for a third year,” Melody Patry, senior advocacy officer, Index on Censorship said.

Over the period of coverage, Mapping Media Freedom has released periodic reports on the verified incidents. In the first quarter of 2016, the project received a total of 301 violations of press freedom to the database, a 30% rise over the fourth quarter of 2015. Earlier reports documented similar trends: February 2016, October 2015, May 2015 and December 2014.

The platform — a joint undertaking with the European Federation of Journalists and Reporters Without Borders and partially funded by the European Commission — covers 40 countries, including all EU member states, plus Albania, Belarus, Bosnia, Iceland, Kosovo, Macedonia, Montenegro, Norway, Russia, Serbia, Turkey, Ukraine and Azerbaijan. In September 2015 the platform expanded to monitor Russia, Ukraine and Belarus and in February 2016 into Azerbaijan. Since launching in May 2014, the map has recorded over 1,800 violations of media freedom, as 17 May 2016. Each report is fact checked with local sources before becoming publicly available on the interactive map.

Mapping Media Freedom works in conjunction with the Council of Europe’s platform about the safety and protection of journalists, provides resources for researchers and information for journalists. It is also affiliated with European Youth Press, Media Legal Defence Initiative, Human Rights House Kiev, Ossigeno per L’Informazione, Osservatorio Balconi e Caucaso and the European Centre for Press and Media Freedom.