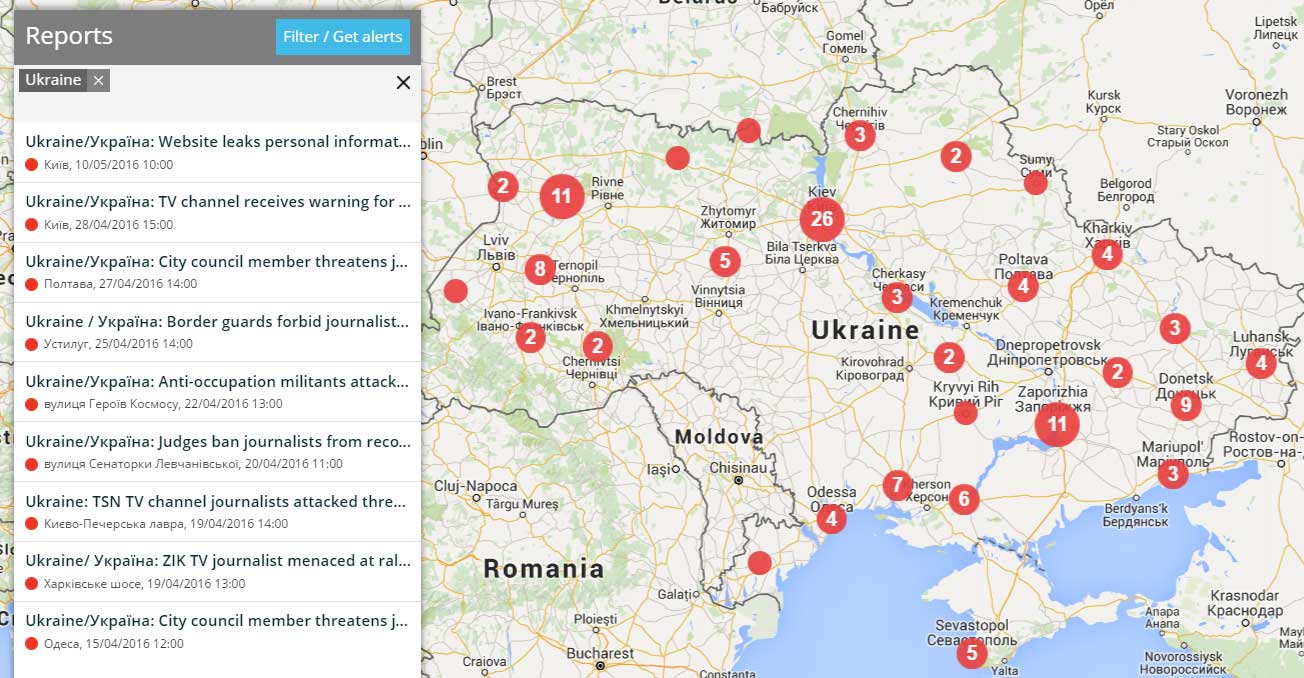 Ukraine is again at the center of an international scandal. On 10 May Ukrainian website Myrotvorets, which publishes personal data of alleged separatists, made public information about the journalists who have been accredited in the so-called Donetsk People’s Republic (DPR) — the part of Donbas area beyond Ukraine’s government control.

The website, which announced on Friday 13 May that it was shutting down, leaked personal data of more than 4,000 journalists, including those working for BBC, Reuters, AFP, The Independent, Ceska televize, CNN, Bloomberg, Aljazeera, AP, Liberation, ITAR-TASS and other media.

The site published the names of the journalists, the media outlets they work for, country of origin, cell phones, email and dates of stay in the DPR.

Myrotvorets, or Peacemaker, received the data from Ukrainian hackers who had attacked DPR sites. After the data was illegally disclosed, the hackers declared a boycott and suspended their activities.

The website also accuses the journalists of co-operating with “militants of the terrorist organisation” and claims that “journalists with Russian names work for many non-Russian media (CNN? BBC? AFP?).”

Myrotvorets has long been raising concerns and criticism of Ukrainian human rights activists. Launched in the spring of 2014, it publishes the personal data of people its writers see as supporting separatism in Ukraine.

In particular, it had published the personal data of former Ukrainian lawmaker Oleh Kalashnikov and journalist Oles Buzyna. Both were murdered near their apartments shortly after the release of their information.

Breaking legislation on personal data protection and the presumption of innocence, the site has been operating for two years without any prosecution for its activities.

In April 2015, the Ukrainian parliament’s Commissioner for Human Rights Valeria Lutkovska demanded that the security service and the interior ministry block the website and prosecute those behind it. Instead, she received only threats in response.

As a result, Anton Herashchenko, the MP from the People’s Front faction and the advisor to the Ukrainian Interior Minister, who previously announced his involvement in the creation of Myrotvorets, threatened Lutkovska with dismissal. He said that operation of the website was “extremely important for the national security of Ukraine and the one, who does not understand this or attempts to hinder its operation, is either a puppet in the wrong hands or works against the national security” and the information is collected “exclusively from such open sources as social networks, blogs, online directories, news feeds”.

Lutkovska’s office of ombudsman told Mapping Media Freedom that the police launched a criminal case last year, but there are no tangible results yet and the website continues its work. The sites servers are located outside Ukraine.

In the wake of the publication of journalists’ information, Lutkovska again appealed to the interior ministry and security service aksing for the site to be blocked.

Journalists, whose personal data was published, have already received threats. Ukrainian freelance journalist Roman Stepanovych has published a threat he received via e-mail.

Stepanovych, who currently works mainly for Vice News, told Mapping Media Freedom: “I filmed in Donbas like a stringer for different news agencies like NBC, DW, Reuters and sometimes worked as a fixer for Die Ziet, CCTV, Aftenposten and many more. I am a native of Donetsk, but have always worked for the western media.“

Stepanovych, who is working outside Ukraine, said that he was considering asking police to investigate the threats when he returns to the country.

On May 11, journalists working for Ukrainian and foreign media issued a joint statement with Ukrainian and international media organisations demanding that Myrotvorets immediately take down the personal data of journalists, who had been accredited in the DPR:

“The Ukrainian and foreign journalists, who risked their lives to cover the events impartially and told what was happening in the occupied territories in Ukrainian and international media, were exposed to attack.  In particular, it is thanks to their work we found out about the Vostok battalion, crimes of militant known as Motorola and other militants, supply of Russian weapons and many other important facts. These journalists gave information for a qualitative investigation into downing of MH17 flight in the summer of 2014, and their materials about senior officials of the occupied territories formed the basis of many investigative and analytical articles. We especially emphasise that accreditation does not mean and has never meant cooperation of journalists with any party to the conflict. Accreditation is a form of protection and safety of journalists.”

According to the Ukrainian and international media organisations, nearly 80 journalists were taken captive in 2014, many of whom suffered torture. Accreditation is the only, although minor, mechanism for protection of journalists from torture or captivity.

Lutkovska and the journalists also appealed to Ukrainian authorities asking for a launch of criminal proceedings. On the same day, the address of the European Union’s ambassador to the Ukraine, Jan Tombinski, was released. Tombinski said that publication of the journalists’ leaked personal data violated the best international practices and Ukrainian legislation. He urged Ukrainian authorities “to help ensure that this content is no longer published“.

In response, Anton Herashchenko posted on his Facebook page: “Currently, Ukraine has no lawful methods to block harmful content and has no principles of defining which content is illegal and harmful and which is not. Ukraine has also no technical possibility to block any content on the internet.”

On May 11, the Kyiv prosecutor’s office opened criminal proceeding under Article 171 of the Criminal Code of Ukraine (Preclusion of legal professional activities of journalists).