The Azerbaijani investigative journalist, who has been arbitrarily imprisoned since December 2014, has been released 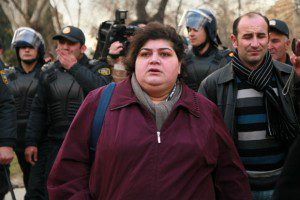 Azerbaijan’s Supreme Court has ordered the release of investigative journalist Khadija Ismayilova. But who is Ismayilova and why was she in prison?

One of Azerbaijan’s most celebrated journalists, Ismayilova investigated, among other things, Azerbaijan’s human rights abuses and the corruption involving the family of president Ilham Aliyev. The recent Panama Papers have followed up on her work, exposing links between the president’s family and a network of offshore tax havens and hidden wealth.

Ismayilova was arbitrarily imprisoned in December 2014 and was sentenced in September 2015 to seven-and-a-half years in prison. Although she is officially charged with large-scale misappropriation and embezzlement, illegal entrepreneurship, tax evasion and abuse of official duties, it is widely believed that the real reason for Ismayilova’s imprisonment is her investigative journalism.

Before her arrest, Ismayilova had been subjected to a relentless campaign of intimidation and persecution, possibly orchestrated by the Azerbaijani authorities to discredit her investigative reporting on corruption amongst the highest levels of society.

“Khadija Ismayilova has suffered a serious invasion of her personal privacy through the installation of hidden cameras and wires in her flat and publication of secretly filmed videos among other incidents. Azerbaijan has a positive obligation to carry out an effective investigation into these violations,” said Camila Graham-Wood, legal officer at Privacy International.

Human rights lawyer Amal Clooney has been representing Ismayilova during her case at the European Court of Human Rights.

Her work was recognised by the United Nations which awarded her the prestigious Unesco/Guillermo Cano World Press Freedom Prize. When Ismayilova was in prison, her mother, Elmira Ismayilova, accepted the award on her daughter’s behalf. She read a statement Ismayilova wrote from prison: “As you gather here tonight, I ask you not to laud my work or my courage, but to dedicate yourself to the work each one of you can do on behalf of press freedom and justice.”

She read a statement Ismayilova wrote from prison: “As you gather here tonight, I ask you not to laud my work or my courage, but to dedicate yourself to the work each one of you can do on behalf of press freedom and justice.” Ljiljana Zurovac, president of the Unesco/Guillermo Cano World Press Freedom Prize 2016 jury, said: “Khadija Ismayilova highly deserves the prize and I am happy to see that her courage and professionalism are recognised.”

Azerbaijan is one of the lowest ranked countries for press freedom, being placed 163 out of 180 countries on the 2016 Reporters Without Border’s World Press Freedom Index.

Protests due to take place this Friday to mark Ismayilova spending her 40th birthday in prison will still go ahead to celebrate her release, call for her full acquittal and for the release of the country’s political prisoners, including Ilgar Mammadov, Seymur Hezi and Ilkin Rustemzade.