On World Press Freedom Day, we should remember that a free media in Turkey faces extinction under its president, Recep Tayyip Erdogan 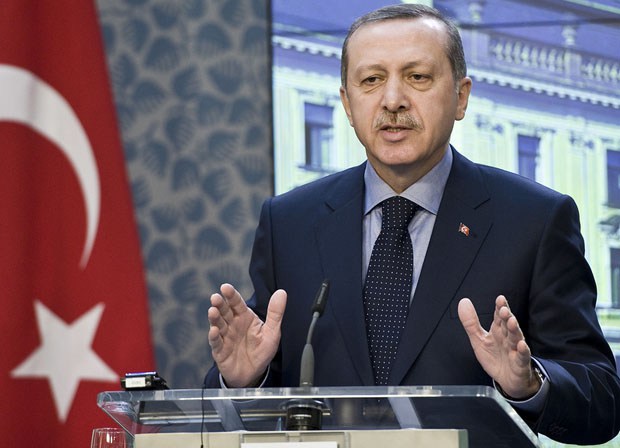 February 4, 2013. Recep Tayyip Erdogan during a press conference in Prague.

Punitive measures and harsh restrictions have diminished the domain for free and independent journalism, and media pluralism is showing strong signs of total collapse.

“Over half of the arrests [in the first quarter of 2016] occurred in Turkey when journalists were reporting on violence or protests in the country,” the report said. “The data indicates a pattern where arrests are launched on terror charges or taking place during anti-terror operations.”

In its latest World Press Freedom Index, scrutinising media in 180 countries, Reporters Without Borders (RSF) ranked Turkey as #151, marking yet another fall, this time by two positions.

“President Recep Tayyip Erdogan has embarked on an offensive against Turkey’s media. Journalists are harassed, many have been accused of ‘insulting the president’ and the internet is systematically censored,” RSF said in its findings.

The decline was even more dramatic in the annual Freedom of the Press 2016 survey by Freedom House. Its survey over the past year marked a fall by six points, placing Turkey as 156th among 199 countries, again among those as “not free”.

“The government, controlled by Erdoğan’s Justice and Development Party (AKP), aggressively used the penal code, criminal defamation legislation, and the country’s antiterrorism law to punish critical reporting, and journalists faced growing violence, harassment, and intimidation from both state and non-state actors during the year. The authorities continued to use financial and administrative leverage over media owners to influence coverage and silence dissent,” it concluded.

This downfall is unprecedented in intensity. The country’s remnant core of brave, free and independent journalists, regardless of their political views, now agree that free journalism will soon cease to exist in Turkey. With full-frontal attacks on the media, the sector may become subservient to the political and bureaucratic power, with content rife with stenography and propaganda.

Legal inquiries and charges against journalists are continually on the rise. According to the ministry of justice, the number of “insulting the president” cases passed 1,800 since mid-2014.

In other cases, such as the charges brought against Cumhuriyet daily, its editors Can Dündar and Erdem Gül are accused of spying and treason, for printing news stories about lorries carrying weapons, allegedly to Syrian jihadist groups, by the government’s orders.

In another notorious case, investigative journalist Mehmet Baransu has been detained for over 13 months over his inquiries into the alleged abuses of power within the military.

In a fresh case, two senior journalists from Cumhuriyet, Ceyda Karan and Hikmet Çetinkaya, were sentenced to two years each in prison for “inciting hatred”. Their “crime” was to reprint the Charlie Hebdo front page cartoon in their column, which they said was an act of professional solidarity.

According to Bianet, a monitoring site, there are now 28 journalists in Turkish prisons, many of whom are affiliated with the Kurdish media, based on charges brought under anti-terror laws.

The draconian nature of charges and prison sentences leave little doubt about AKP government’s intent to criminalise journalism as a whole.

Punitive measures against journalism go far beyond court cases. The most efficient method has proven to be firing journalists who insist on exercising basic standards of the profession.

Since mid-2013, following Gezi Park protests, 3,500 journalists have lost their jobs. Media moguls have come under increasing pressure from the government, which demands action or threatens to cancel lucrative public contracts. Taking advantage of the low influence of trade unions (fewer than 4% of journalists are members), employers axe staff arbitrarily.

As a result of this widespread exercise in conglomerate-dominated “mainstream media”, with newsrooms turned into “open-air prisons”, self-censorship in Turkey has become a deeply rooted culture. Blacklists have been drawn up of TV pundits and columnists in the press, who are known for critical stands, no matter their political leaning.

What apparently weighed heavy in the gloomy figures by Index on Censorship, RSF and FH is the fact that, from early last year, authorities started also targeting large, private media institutions, known for critical journalism.

Hürriyet, an influential newspaper belonging to Doğan Media was attacked by a mob two nights in a row last summer, after which its owners felt they had to “tone down” critical content.

In even more dramatic cases, Koza-Ipek Media outlets were raided by the police last autumn, followed some months later by a similar large-scale operation against Zaman Media, second largest group in the sector, and the largest independent news agency, CHA.

These seizures, along with some other critical channels yanked off satellite and digital platforms in recent months, left a huge vacuum, threatening to terminate the diversity of the media.

Now, with around 90% of the sector under direct or indirect editorial control of the AKP government, including the state broadcaster TRT, there are only three critical TV channels and no more than five small-scale independent newspapers left.

As a result of these assaults, two things are apparent: firstly, investigative journalism is blocked and news is severely filtered; secondly, with diversity fading out, public debate, a key aspect of any democracy, is severely limited.

Along with routine bans on reporting on specific events such as terror attacks, severe accreditation restrictions and a newly emerging pattern of deporting international media correspondents, the conclusion is inevitable.

A profession faces extinction and along with its exit, and a thick wall between the truth and the public, both domestic and international, is emerging. This total collapse will have far deeper consequences than anyone can imagine.