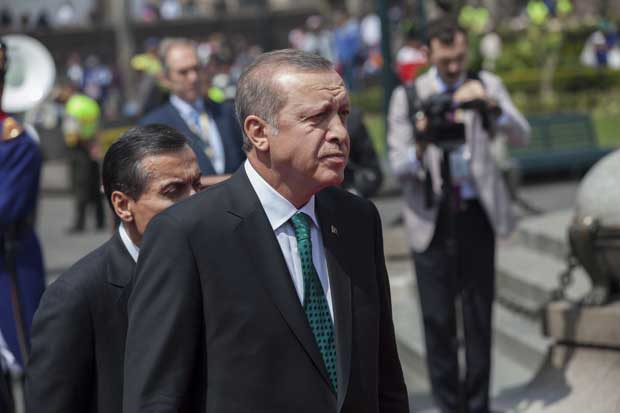 Nothing could illustrate the course of developments in Turkey better than the case of prosecutor Murat Aydın.

In what was described as a “judicial coup” in critical media, Aydin was one of 3,746 judges and prosecutors, who were reassigned in recent days, an unprecedented move that has shaken the basis of the justice system. Some were demoted by being sent into internal “exile”, some were promoted.

According to daily Cumhuriyet, his pro-freedom stance landed him in the former group.

Aydin’s transgression was to challenge the Turkish Penal Code’s Article 299 — the basis of “insulting the president” cases — in the country’s constitutional court. He argued that Article 299 was unconstitutional and conflicted with the European Convention on Human Rights. He had asked the top court to void the article.

After the reshuffle, he was told he would now be handling cases in Trabzon on the Black Sea coast, clear across the country from İzmir on the Aegean, where he had been working.

“I was exiled because of the decisions I have made and my expressed views,” he told Cumhuriyet. ”The worst part is, there is no authority any longer where we seek these type of sanctions to be checked, where we can challenge unjust acts.”

Meanwhile, another prosecutor, Cevat İslek, who made his name  filing charges against journalists on the basis of “insulting the president” was promoted, Cumhuriyet noted, to the position as the deputy chief prosecutor in Ankara.

One wonders how such transfers are perceived by the public. Do Turks notice that the how the president, Recep Tayyip Erdoğan, and his AKP government are seizing control over the domain of expression through the imposition of large-scale punitive measures? Do they notice that this is taking place in defiance of the constitution, which defines the office of the president as being “impartial”?

The accelerated authoritarianism in Turkey — chiefly targeting media, academia and civil dissent — leaves nothing to chance. Though the media sector and its professionals remain top of the list for the president’s persecution, those who are seen as instrumental in filing and judging the court cases against them are also targets.

The issue has raised the alarm levels to new heights. In a recent report a global body of legal experts issued an “orange level” of concern on the state of the judiciary in Turkey, warning, after scrutinising the rising problems, that it is falling into total subordination of the executive.

”The ICJ remains concerned that transfers are being applied as a hidden form of disciplinary sanction and as a means to marginalize judges and prosecutors seen as unsupportive of government interests or objectives,” the Geneva-based International Commission of Jurists (ICJ) wrote in its report, Turkey: the Judicial System in Peril, which was prepared after a long series of talks with anonymous judges and prosecutors, among others.

“Many of those with whom the mission met noted that there are now unprecedented levels of pressure, division, distrust and fear in the Turkish judiciary. There are alarming signs that this has already led to manipulation of the judicial system on political grounds, including to target government opponents or to criminalize and prosecute criticism of the government. Of particular concern, is the high number of prosecutions for offences restricting freedom of expression, in particular for the offence of ‘insulting the president’.”

With the backbone of justice highly infected by partisanship, a “total eclipse” is looming and it becomes much easier to grasp the magnitude of oppression. “Insulting” cases may have risen above 2,000 since last year, but what is happening today is a multifaceted assault on freedom of speech and journalism as a whole.

Media monitoring organisations – Platform for Independent Journalism, Reporters Without Borders and Turkish Trade Union of Journalists – estimate that, now, the portion of media under direct and/or indirect control of the presidential palace and the AKP, is around 90%. This is corroborated by Mapping Media Freedom, which has recorded the litany of cuts against journalism.

The remnant segment of independent journalism operates, under great legal and financial strain, with dailies such as secular Cumhuriyet, liberal Özgür Düşünce, leftist Birgün and Evrensel, and Kurdish Özgür Gündem. On the TV side, the “capture” is even more severe: there are only three channels — Kurdish IMC TV, liberal CanErzincan and secular Halk TV — airing critical content.

But even such a weakened media segment seems to worry the authorities. The most recent meeting of the National Security Council, a powerful body symbolising state authority, ended with the endorsement that the battle against what the AKP sees as the “domestic enemies”, namely the Kurdish Political Movement and what Erdoğan depicts as “parallel structure” Gülenists, will be escalated.

Everybody knows what this refreshed announcement means: the remaining independent outlets will be criminalised by any means necessary. The latest developments indicate that the special office of prosecution on crimes against the constitution is preparing to launch inquiries against a number of outlets, chiefly targeting the Kurdish media. In other words, further closures may be expected to appear on the government’s agenda.

Along with the systematic arrests of more than 12 reporters of Dicle News Agency, which is almost the only source of news on what takes place during “scorched earth” operations in the mainly Kurdish southeastern provinces, the strongest sign on the media clampdown is the legal investigation filed against more than 15 well-known journalists — most of them non-Kurdish — who took part in an act of solidarity, “Chief Editors Vigil”, with the pro-Kurdish daily, Özgür Gündem.

The journalists are expected to be charged with “terrorist propaganda” under Turkey’s anti-terror law, which Erdoğan and the AKP government refuses to revise despite EU demands – a key criteria for visa liberalisation for Turkish citizens.

Nothing, it seems, will suffice to alter the authoritarian course Turkey has been taking and the price journalists and peaceful dissidents are forced to pay rises geometrically.

But nothing seems to stop the tiny-but-tough core of resistant journalists who continue to confront the Orwellian state as it consolidates itself under the nose of the pro-government and subservient media.