NEWS
Greece: The dangers of reporting on the refugee crisis 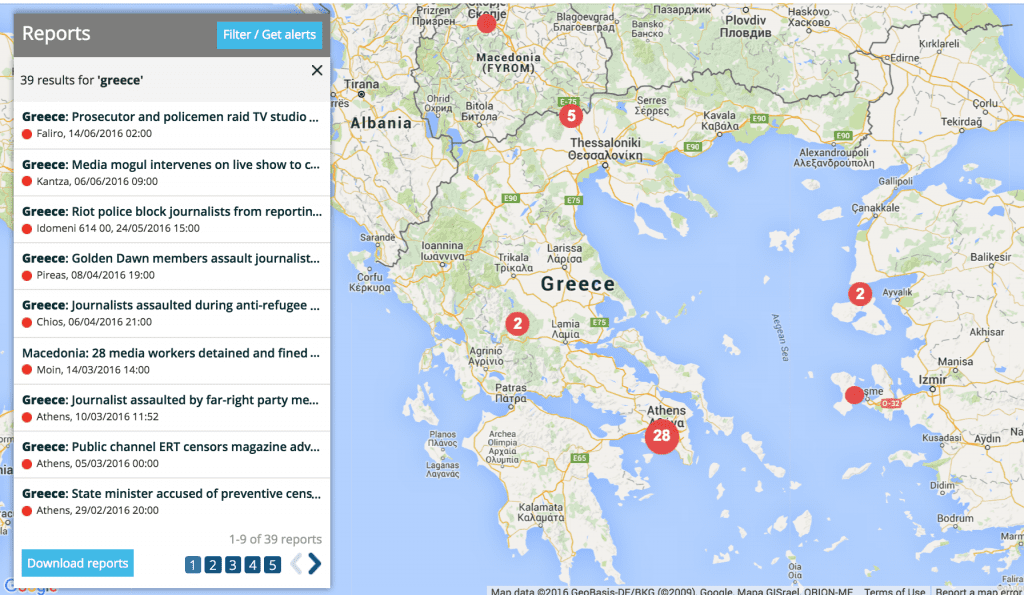 As Greece tries to deal with around 50,000 stranded refugees on its soil after Austria and the western Balkan countries closed their borders, attention has turned to the living conditions inside the refugee camps. Throughout the crisis, the Greek and international press has faced major difficulties in covering the crisis.

“It’s clear that the government does not want the press to be present when a policeman assaults migrants,” Marios Lolos, press photographer and head of the Union of Press Photographers of Greece said in an interview with Index on Censorship. “When the police are forced to suppress a revolt of the migrants, they don’t want us to be there and take pictures.”

Last summer, Greece had just emerged from a long and painful period of negotiations with its international creditors only to end up with a third bailout programme against the backdrop of closed banks and steep indebtedness. At the same time, hundreds of refugees were arriving every day to the Greek islands such as Chios, Kos and Lesvos. It was around this time that the EU’s executive body, the European Commission, started putting pressure on Greece to build appropriate refugee centres and prevent this massive influx from heading to the more prosperous northern countries.

It took some months, several EU Summits, threats to kick Greece out of the EU free movement zone, the abrupt closure of the internal borders and a controversial agreement between the EU and Turkey to finally stem migrant influx to Greek islands. The Greek authorities are now struggling to act on their commitments to their EU partners and at the same time protect themselves from negative coverage.

Although there were some incidents of press limitations during the first phase of the crisis in the islands, Lolos says that the most egregious curbs on the press occurred while the Greek authorities were evacuating the military area of Idomeni, on the border with Macedonia.

In May 2016, the Greek police launched a major operation to evict more than 8,000 refugees and migrants bottlenecked at a makeshift Idomeni camp since the closure of the borders. The police blocked the press from covering the operation.

“Only the photographer of the state-owned press agency ANA and the TV crew of the public TV channel ERT were allowed to be there,” Lolos said, while the Union’s official statement denounced “the flagrant violation of the freedom and pluralism of press in the name of the safety of photojournalists”.

“The authorities said that they blocked us for our safety but it is clear that this was just an excuse,” Lolos explained.

In early December 2015, during another police operation to remove migrants protesting against the closed borders from railway tracks, two photographers and two reporters were detained and prevented from doing their jobs, even after showing their press IDs, Lolos said.

While the refugees were warmly received by the majority of the Greek people, some anti-refugee sentiment was evident, giving Greece’s neo-nazi, far-right Golden Dawn party an opportunity to mobilise, including against journalists and photographers covering pro- and anti-refugee demonstrations.

On the 8 April 2016, Vice photographer Alexia Tsagari and a TV crew from the Greek channel E TV were attacked by members of Golden Dawn while covering an anti-refugee demonstration in Piraeus. According to press reports, after the anti-refugee group was encouraged by Golden Dawn MP Ilias Kasidiaris to attack anti-fascists, a man dressed in black, who had separated from Golden Dawn’s ranks, slapped and kicked Tsagari in the face.

“Since then I have this fear that I cannot do my work freely,” Tsagari told Index on Censorship, adding that this feeling of insecurity becomes even more intense, considering that the Greek riot police were nearby when the attack happened but did not intervene.

Following the EU-Turkey agreement in late March which stemmed the migrant flows, the Greek government agreed to send migrants, including asylum seekers, back to Turkey, recognising it as “safe third country”. As a result, despite the government’s initial disapproval, most of the first reception facilities have turned into overcrowded closed refugee centres.

“Now we need to focus on the living conditions of asylum seekers and migrants inside the state-owned facilities. However, the access is limited for the press. There is a general restriction of access unless you have a written permission from the ministry,” Lolos said, adding that the daily living conditions in some centres are disgraceful.

Ola Aljari is a journalist and refugee from Syria who fled to Germany and now works for Mapping Media Freedom partners the European Centre for Press and Media Freedom. She visited Greece twice to cover refugee stories and confirms that restrictions on journalists are increasing.

“With all the restrictions I feel like the authorities have something to hide,” Aljari told Index on Censorship, also mentioning that some Greek journalists have used bribes in order to get authorisation.

Greek journalist, Nikolas Leontopoulos, working along with a mission of foreign journalists from a major international media outlet to the closed centre of VIAL in Chios experienced recently this “reluctance” from Greek authorities to let the press in.

“Although the ministry for migration had sent an email to the VIAL director granting permission to visit and report inside VIAL, the director at first denied the existence of the email and later on did everything in his power to put obstacles and cancel our access to the hotspot,” Leontopoulos told Index on Censorship, commenting that his behaviour is “indicative” of the authorities’ way of dealing with the press.