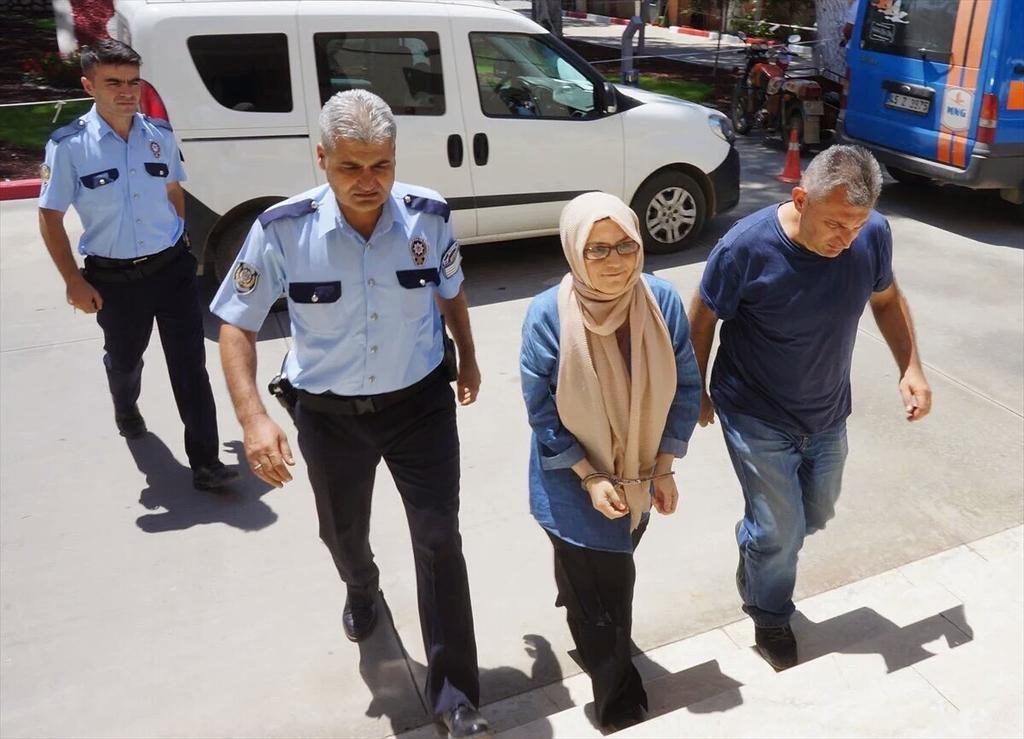 Büşra Erdal, who surrendered in Manisa, taken to police headquarters in handcuffs.

“It was very, very close,” according to a source who followed the case of columnist and human rights lawyer Orhan Kemal Cengiz. By a hair he had avoided detention. While Cengiz has now been released, he is unable to travel abroad.

During the interrogation, Cengiz had repeatedly been asked about critical tweets he had posted about a year ago. “Those who led the interrogation were utterly hostile, seemingly set for finding a pretext to hold him in custody,” my source said. Cengiz’s friends believe that his impeccable international reputation and his work for the European Court of Human Rights, where he has defended Kurds and even, in a couple of cases, Turkish Islamists against the state, may have saved him from a jail cell.

However, there is nothing to suggest the easing this post-coup witch hunt. Yesterday, the veteran journalist Nazlı Ilıcak was arrested at a police checkpoint in Bodrum and taken into custody. Judicial affairs journalist Büşra Erdal surrendered after she tweeted that she was being punished for her work. Sadly the powerful Doğan Media Group outlets, of which both honourable journalists are affiliated, remained silent. Not a word of support was seen in any of the group’s newspapers.

The only support came from the Enis Berberoğlu, former chief editor at Hürriyet and now MP and deputy of the main opposition Republican People’s Party (CHP), who tweeted: “As their superior once, I was mainly responsible for the stories and the sections that Bülent Mumay and Arda Akın wrote and worked for. I vouch and stand for them.”

Against the backdrop of the authorities’ search for 42 journalists, pro-government media was busy on Tuesday inciting hatred for the columnists and asking for their imprisonment, including the daily Akşam. The pro-Justice and Development Party (AKP) daily Sabah added to the flames by accusing columnists such as Hasan Cemal, Kadri Gürsel, Cengiz Çandar, Perihan Mağden, Mehmet Altan and others of provoking the coup. These journalists and columnists are no longer allowed to express themselves in any media outlet.

Perhaps more than anything else, it was a crucial legal appointment that worried Turkey’s dissident figures in media and academia. In a hasty move, the government named İrfan Fidan as the chief prosecutor for Istanbul. Until Monday, Fidan was a deputy attorney in Istanbul’s Anti-Terror and Organised Crime Unit. What’s most notable, however, is that Fidan was the prosecutor who sentenced Cumhuriyet editors Erdem Gül and Can Dündar to five years and five years and ten months, respectively, in prison. The pair had covered the alleged supply of arms to Syrian jihadist groups by the Turkish secret service.

Academic Esra Mungan and three others who had signed the peace petition for the Kurds clashed were also detained due to his efforts. In another example, Fidan had taken over the case that implicated high-ranking AKP ministers and president Recep Tayyip Erdogan’s family members in corruption. He dismissed all charges.

Many fear, therefore, that his appointment to such a powerful post may come to mean a steep escalation against journalists and scholars in the coming weeks.

All other signs, too, indicate harder times.

On Monday night, in the midst of turmoil, Erdogan ratified the law which, in practice, subordinates the high judiciary to the political executive and immediately after the Board of Judges and Prosecutors, led by the Justice Ministry, implemented a long series of appointments and removals in the Court of Cassation and Council of State.

Erdogan met with two opposition party leaders. CHP and Nationalist Movement Party leaders were invited, but not the third largest elected one, the pro-Kurdish Peoples’ Democratic Party. It was a deliberate choice, raising eyebrows on how serious the ruling AKP is about rebuilding democracy. In addition, Erdogan spoke for a possible extension of emergency rule for an additional three months.

Meanwhile, Turkey will be run by decrees and everybody knows what that means.