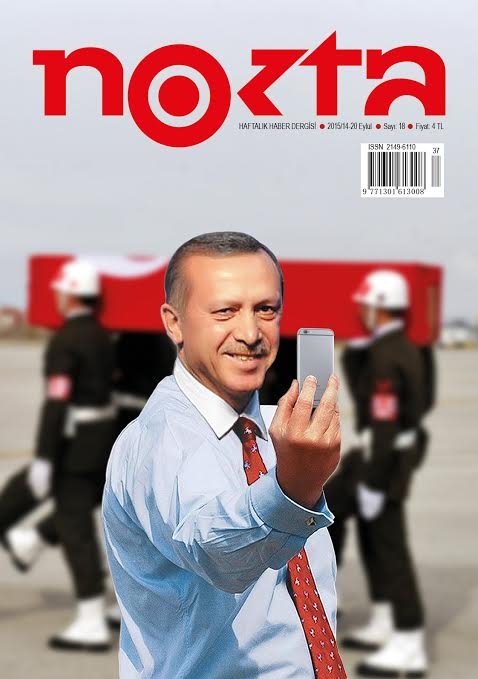 It was at the early hours of Friday that a journalist sent a note to her colleagues.

“We are told by the management that our publication is discontinued with immediate effect,” she said. “We are told to pack our belongings and leave the office. You can’t imagine how sad I am.”

The weekly news magazine Nokta, which had been launched in the aftermath of a military coup in 1980s, is no more.

Lately, under a new management, Nokta belonged to the critical mass of what remained of independent journalism in Turkey, with long reads and popular, bright commentators such as Perihan Mağden and Gükhan Özgün.

My colleague went on to say that the management internal communique cited the loss of a printing house as the reason for the closure. Given the waves of restriction over basic freedoms in the wake of Emergency Rule declared in 81 provinces of Turkey, this explanation came as no surprise.

Commenting on the closure, a Kurdish colleague who has extensively covered the operations in Cizre and Diyarbakır, added: “It’s a disaster to have the media outlets shut down, but it’s even worse to see media professionals left without a job.”

In another incident, Paolo Brera, a well-known reporter with La Repubblica, was held by the police officers at Sultanahmet Square yesterday while interviewing tourists, and taken to police headquarters. At first his whereabouts were unknown, and Italy had to intervene at the highest level to have him released after four hours.

As of Friday afternoon the situation of the columnist and human rights lawyer Orhan Kemal Cengiz was unclear. Cengiz is an international figure and close friend of the Kurdish lawyer Tahir Elçi who was assassinated in Diyarbakır last summer. Among other assignments, Cengiz followed the case of Christian missionaries slain in Malatya in 2007. He attended the UN’s Human Rights Summit in Geneva some months ago, commemorating by explaining the situation to a larger audience. His colleagues are on standby, knowing that he is held at the Anti-Terror Unit in Istanbul. His wife, also a lawyer, had been told that the detention was related to a case from 2014, but nobody has any further details.

The Emergency Rule means that no lawyers other than those appointed by the bar associations are now allowed to have access to all the cases. What is also known is that those who are arrested are held in cells at police headquarters.

Justice Minister Bekir Bozdağ said in an interview yesterday that in “crimes related to terrorist activities” individuals can be detained for at least seven-to-eight days. “Our staff is working on the possibilities of even extending that time,” he said, adding that he shares the concern that it will be very difficult to distinguish innocents from criminals.

The overall situation continues to be opaque, with scarce information, and experienced journalists caution each other to compare what’s being officially stated with what’s really being done. The measures so far leave little doubt that the media and the academia are under severe pressure, and the growing concern is there is an escalation of a clampdown, without much explanation of what the media and academic freedom had to do with the very coup attempt itself.