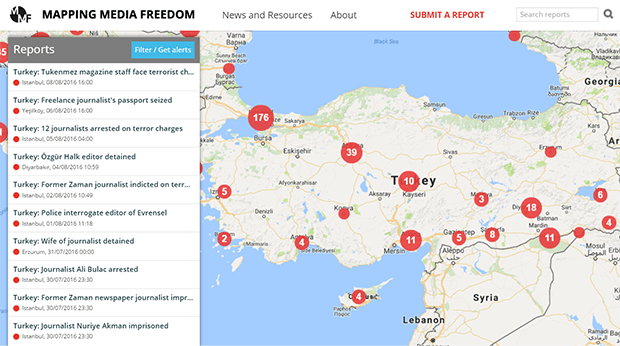 The number of threats to media freedom in Turkey have surged since the failed coup on 15 July.

One of the most vital duties of a journalist — in any democracy — is to report on the day-to-day operations of a country’s parliament. Journalism schools devote much time to teaching the deciphering budgets and legal language, and how to report fairly on political divides and debates.

I recalled these studies when I read an email Wednesday morning from an Ankara-based colleague. I smiled bitterly. The message included a link to an article published in the Gazete Duvar, which informed that 200 journalists had been barred from entering the home of the Grand National Assembly of Turkey. Security controls at the two entrances of the failed-coup-damaged building had been intensified and journalists were checked against a list as they tried to enter.

The reason for the bans? Most of those who were blocked worked for shuttered or seized outlets alleged to be affiliated with the Gülenist movement.

Parliament, though severely damaged by bombing during the night of the coup attempt, is still open. For any professional colleague, these sanctions mean only one thing: journalism is now at the absolute mercy of the authorities who will define its limits and content.

Many pro-government journalists do not think the increasingly severe controls are alarming. “It is democracy that matters,” they argue on the social media. “Only the accomplices of the putschists in the media will be affected, not the rest.”

If only that were true. Reality proves the opposite. Along with the closures of more than 100 media outlets, a wide-scale clampdown on Kurdish and leftist media is underway. Outlets deemed too critical of government policies have come under post-coup pressure.

Late Tuesday, pro-Kurdish IMC TV reported that the official twitter accounts of three major pro-Kurdish news sources — the daily newspaper Özgür Gündem and news agencies DIHA and ANF — were banned. Some Kurdish colleagues interpret the sanctions as part of an upcoming security operation in the southeastern provinces of Diyarbakır and Şırnak.

What I see is a new pattern: in the past three-to-four days, many Twitter accounts of critical outlets and individual journalists have been silenced. An “agreement” appears to have been reached between Ankara and Twitter, but no explanation has yet been given.

For days now, many people have been kept wondering about the case of Hacer Korucu. Her husband, Bülent Korucu, former chief editor of weekly Aksiyon and daily Yarına Bakış, is sought by police after an arrest order issued on him about “aiding and abetting terror organisation”, among other accusations. She was arrested nine days ago as police had told the family that “she would be kept until the husband shows up”.

The Platform for Independent Journalism provided more insight on Hacer Korucu’s detention and subsequent arrest. The motive? She had taken part in the activities of the schools affiliated with Gülen Movement and attended the Turkish Language Olympiade.

Hacer Korucu’s case, without a doubt, shows how arbitrary law enforcement has become in Turkey. As a result no citizen can feel safe any longer.

“She is a mother of five,” was the outcry of Rebecca Harms, German MEP. “A crime to be married to a journalist?”

How do we now expect an honest Turkish or Kurdish journalist to answer this question? By any measure of decency, the snapshot of Turkey in the post-putsch days leaves little suspicion: emergency rule gives a free reign to authorities who feel empowered to block journalists from covering the epicenter of any democratic activity — parliament — and let relatives of journalists suffer.

Meanwhile, we are told on a daily basis that democracy was saved from catastrophe on that dreadful July evening and it needs to be cherished.

A version of this article originally appeared on Suddeutsche Zeitung. It is posted here with the permission of the author.