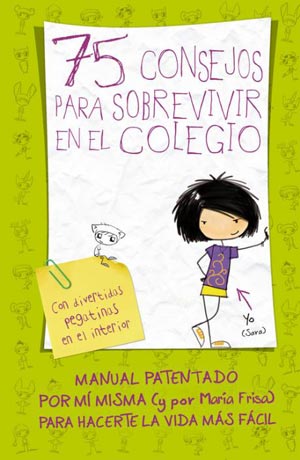 In this guest post, the editor de Letras Libres España explains the uproar over of children’s book.

More than 30,000 people have signed a petition to have 75 Tips to Survive School (75 Consejos para Sobrevivir en el Colegio) — a book by author María Frisa and published by Alfaguara in 2012 —  pulled from the market in Spain.

The petition, hosted on Change.org, accuses the book of giving “toxic advice”, and of inciting sexism, disobedience and bullying. The publishing house said it will not withdraw the book, although the cover will emphasise that it is a work of fiction. The author issued a statement in which she regretted the misunderstanding surrounding her book.

The charge is old and familiar: Frisa is accused of corrupting the young. And the strategy is also old and familiar: intolerance and the literal mind posing as protecting the weak. We tend to think that those who restrict freedom of speech have evil motives. But they almost always act in defence of a noble cause, convinced of their good intentions.

The initial complaint came from @YaraCobaain, a Twitter user, on 23 July, and the petition was launched by Haplo Schaffer, a YouTuber. It was amplified by the media, which often merely repeated the petition’s ideas and points of view, thus distorting the contents of the book and presenting excerpts without explaining the context. It seems reasonable to assume that the vast majority of the signatories have not read the book. When Schaffer wrote the petition, he hadn’t either.

A careful reading of the petition on Change.org could have triggered some alarm: for example, the fact that it describes 75 Tips to Survive School as addressed to girls, as if in Spain books were segregated by gender (the book is not even directed towards a female reader: tip number 22, for example, is “finge ser simpático”, and the adjective “simpático” is in the masculine form). The campaign and some of the press presented the book as if it were a manual. Actually, and very clearly, Frisa’s book, which is part of a series, is a literary work of humorous fiction. The narrator, Sara, is a fictional character. She has irreverent opinions, describes tactics that are not presented as morally exemplary, and concocts plans which often go awry. The book’s tone is naive and childish. A reader might find the joke more or less funny, but it’s clearly a joke.

Regardless of the work’s genre, and though it might seem odd if someone does not like a book or its ideas they can choose not to buy it, and even not to read it. On top of ignoring the characteristics of the object that offends them, the petition’s signatories seem to overestimate the influence of literature on our behaviour and to underestimate the reading comprehension of the young – we can safely expect that it won’t always be as rough or twisted as the campaigners’. If we applied the same standard to every book written for children, or to every work that may fall into a child’s hands, we may have to do without a few, from Tom Sawyer to Matilda. We would probably have to withdraw The Simpsons and Robert Louis Stevenson as they would be considered a peril for the young, and I don’t know what we’d make of the Bible. Literature would lose complexity, richness, humor and the ability to help us understand different viewpoints and behaviours.

Although the campaign has denounced what it says is an incitement to bullying, it has harassed the writer and has intimidated the publishing house. In the book’s page on Amazon, the vast majority of comments were made after 23 July 2016, and they contain the ideas of the petition. Murcia, a region in Spain, has called for the withdrawal of the book. The author has claimed that she has received death threats. When Frisa published her statement, Schaffer, who has later distanced himself from the threats and insults of some campaigners on Twitter and on a commented reading of the novel on YouTube, wrote: “You are disgraceful and a coward, @MFrisa. I have been extremely polite so far, but enough is enough.” He tweeted to the publishing house: “If you want to present a coherent explanation, @Alfaguara_es, you still have time. If not, face the consequences, they won’t be nice.” Interestingly, in the explanations of some of his YouTube videos Schaffer defends the importance of freedom of speech.

In The Art of the Novel, Milan Kundera writes: “The word agélaste: it comes from the Greek and it means a man who does not laugh, who has no sense of humour. Rabelais detested agélastes. He feared them. He complained that the agélastes treated him so atrociously that he nearly stopped writing forever”

In 2016, 30,000 people in Spain have demanded the banning of a children’s book that in most cases they haven’t read. The petition states: “It is intolerable that such content is published, publicised and disseminated.”

Frisa has had the support of her publishing house, as well as some colleagues and members of the literary world. But one of the most striking things about this case is her helplessness before hysterical vigilantes and the stampede of people who have more energy to be indignant than time or desire to be properly informed. It’s partly explained by the dynamics of social networks, which are difficult to stop. But the role of many journalists has also been regrettable. Firstly, their job is to report events as they are, and in this case many have failed to do so. Secondly, those whose living depends on freedom of speech should be wary of this kind of phenomenon: armed with the best intentions, one day they might also come to shut you up.

A version of this article originally appeared in Letras Libres.