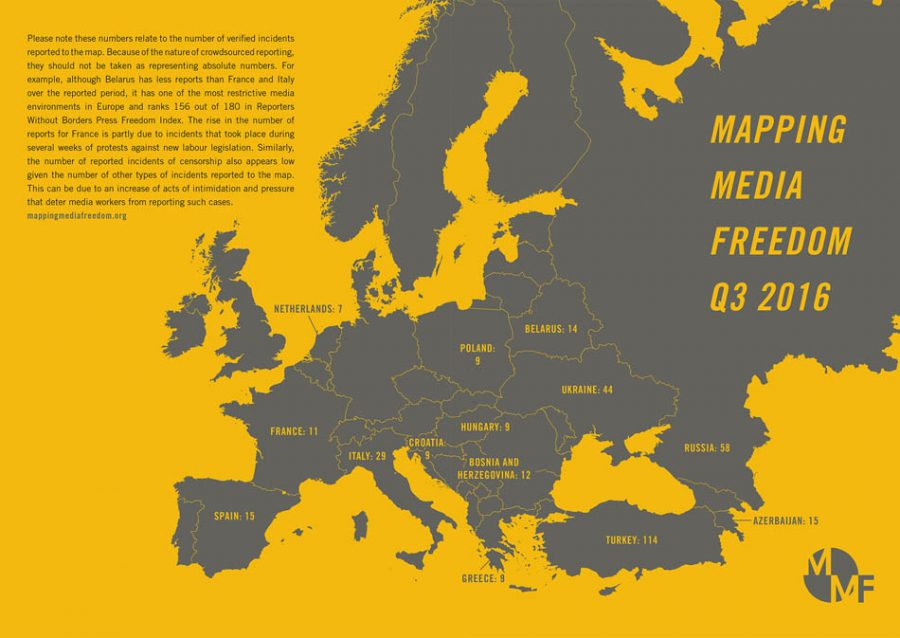 An unprecedented series of crackdowns on media professionals and news outlets took place in Europe and neighbouring countries during the third quarter of 2016, recorded by Index on Censorship’s Mapping Media Freedom project.

Between 1 July and 30 September MMF’s network of correspondents, partners and other sources submitted a total of 406 verified reports of threats to press freedom, a 19% rise from the second quarter of 2016.

An important factor in the rise in media violations was the attack on Turkey’s democratically-elected government on 15 July. Following the failed coup attempt, Turkish authorities forced more than 2,500 journalists out of their jobs, arrested and prosecuted 98 under trumped-up criminal charges, detained 133 and seized or shut down 133 media outlets. The post-coup environment in the country is explored in an extensive case study.

“The post-coup situation for media freedom in Turkey is dire. The sheer number of journalists arrested, detained and charged is without precedent in Europe. At the same time the reports collected by the map are pointing to other areas of concern in Russia and Ukraine,” Hannah Machlin, Mapping Media Freedom project officer, said.

“With nine out of every 10 murders of journalists never solved, the vicious cycle of impunity still prevails. It has to be broken. There can be no exception to the very basic rule that all attacks on journalists must be investigated quickly and thoroughly. We should never give up the fight for journalists’ safety and the struggle to end impunity for crimes committed against journalists,” Dunja Mijatović, OSCE Representative on Freedom of the Media, said.

“Reporters Without Borders is deeply concerned by the many cases of the use of violent intimidation tactics to silence journalists over the past few months. Acts of violence, and impunity for these acts, has a serious chilling effect on freedom of expression and freedom of information. The increasing use of violence to silence critical voices is part of a global trend of deteriorating press freedom, which must be addressed as a matter of urgent priority”, said Rebecca Vincent, UK Bureau Director for Reporters Without Borders (RSF)

The report is available in web and pdf formats.

Mapping Media Freedom – a joint undertaking with the European Federation of Journalists and Reporters Without Borders, partially funded by the European Commission – covers 42 countries, including all EU member states, plus Bosnia, Iceland, Kosovo, Macedonia, Montenegro, Norway, Serbia, Turkey, Albania along with Ukraine, Belarus and Russia in (added in April 2015), and Azerbaijan (added in February 2016). The platform was launched in May 2014 and has recorded over 2,500 incidents threatening media freedom.