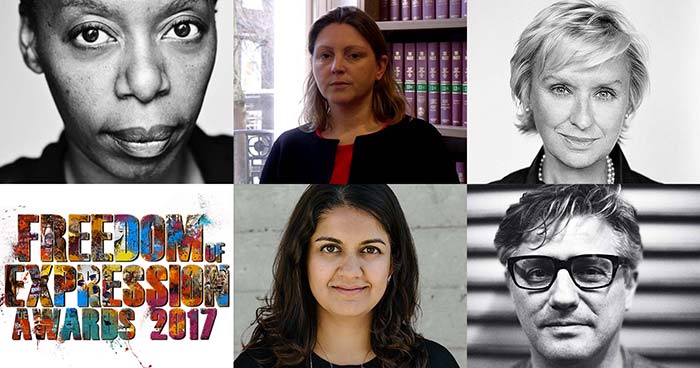 The awards, now in their 17th year, honour those at the forefront of challenging censorship in the field of arts, campaigning, journalism and digital advocacy. Many of the winners face regular persecution for their work.

Dumezweni, who plays Hermione in the stage play Harry Potter and the Cursed Child, was shortlisted earlier this year for an Evening Standard Theatre Award for Best Actress. Speaking about the importance of the Index Awards she said: “Freedom of expression is essential to help challenge our perception of the world”.

Caoilfhionn Gallagher is a public law specialist at Doughty Street Chambers who represented the bereaved families in the 7/7 London bombings, and the Hillsborough football stadium tragedy. In October 2016 she was named Human Rights and Public Law Junior of the Year at the Chambers UK Bar Awards.

“Freedom of expression is needed now more than ever, as many governments worldwide are attempting to stifle critical voices. Some do this in ways which are blatant breaches of fundamental freedoms, others’ methods are more subtle but still pose a significant threat to free speech and democracy. Now, more than ever, we must fight to protect and champion freedom of expression,” said Gallagher.

Other judges on the panel include Tina Brown, an award-winning journalist and former editor-in-­chief of Tatler, Vanity Fair and The New Yorker; Anab Jain, TED fellow and co-founder of Superflux, a company focused on emerging technologies; and Stephen Budd, chairman of the Music Managers Forum and co-founder of Damon Albarn’s ‘Africa Express’ musical collaborations project.

Announcing the judging panel, Index on Censorship chief executive Jodie Ginsberg said: “No one should be punished for speaking freely — yet across the world we see journalists muzzled for challenging politicians, musicians silenced for questioning the status quo, or cartoonists forced to drop their pens because they mocked the powerful and the corrupt.”

“Our awards celebrate those who fight back. And we’re delighted to have such an impressive panel selecting this year’s winners.”

Previous winners of the Freedom of Expression awards include Nobel Peace Prize winner Malala Yousafzai, Israeli conductor Daniel Barenboim, and Russian journalist Anna Politkovskaya. Hundreds of public nominations are made for the awards each year. Many of those nominated are regularly targeted by authorities or by criminal and extremist groups for their work. Some face regular death threats, others criminal prosecution.

The Freedom of Expression Awards 2017 will be held on April 19 at the Unicorn Theatre.

Award winners become Index on Censorship Freedom of Expression Award Fellows and receive training and support for a year after the awards to help them maximise the impact of their work.