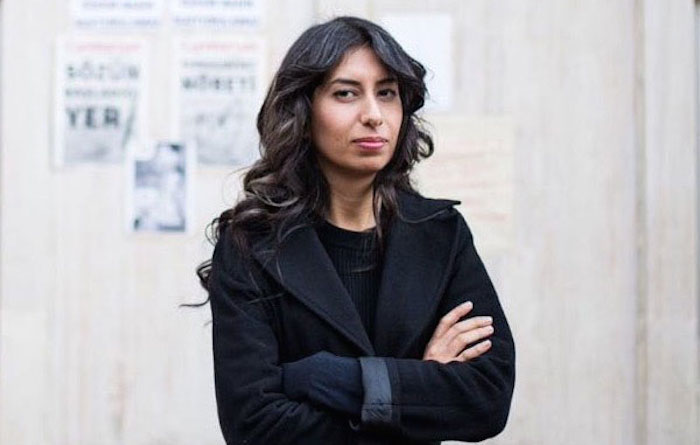 Canan Coşkun, a journalist at daily newspaper Cumhuriyet who faces two upcoming trials for her reporting, talks about her attitude to the dangers of life as a reporter in Turkey, in the Spring 2017 issue of Index on Censorship magazine

Every two to three weeks recently, I have seen off a colleague leaving the courthouse for prison or snatched a few moments with a deeply missed, and now detained, workmate in the shadow of the authorities. But we aren’t afraid of this dungeon darkness because we journalists are only doing our jobs.

I have been a court reporter for Cumhuriyet since 2013, so I spend the large majority of my working life in the courts. We all have moments we cannot forget from our working lives. For me, one such day was 5 November 2016, the day when 10 of our writers and managers were arrested. I was waiting for the court’s decision right behind the barrier in the court building, and the moment I heard the decision I felt a flush of pride for our 10 writers and managers, followed by anger and deep depression for my friends.

I felt proud because the fact that they had been arrested for their journalism had been mentioned in the court’s decision. In listing examples of our reporting as the reason for the arrests, the judge took the government’s insistence that “they were not arrested for their journalism” and threw it out of the window. I felt anger and sadness because we were sending our friends off to an indefinite spell of captivity. The police would not even allow us to say goodbye to our colleagues who were only 30 or 40 metres away behind a barrier. But among the many feelings I had, fear was not one of them. When the attacks on journalism are on this scale, fear becomes a luxury.

After our 10 colleagues were arrested, many journalists from around Europe began visiting our newspaper’s offices. Our foreign counterparts wanted to hear about what had happened and how we felt, and they all had the same question: “Are you afraid?” From November onwards, arrests of journalists have continued at a regular pace. But just as on that day, my answer to that question today is short and sweet: “No!”

When the attacks on journalism are on this scale, fear becomes a luxury

Ahmet Şık, a reporter at my newspaper, has been under formal arrest since December 2016. Back in 2011, along with former military chief of staff İlker Başbuğ and many soldiers, police, journalists and academics, he spent more than a year in prison in relation to the “Ergenekon” case. The accusation was that they were attempting to overthrow the government.

Şık is currently under arrest accused of conspiring with the Gülen movement. But Turkey’s justice system is such that the case in which Şık was arrested in 2011 still continues, and this gave us a chance to see him in court on 15 February. I waited outside the courtroom doors and when they opened all I saw inside was a face smiling with hope: he was able to see his friends for the first time in months. Although Şık is a much more experienced journalist than I am, his desk in the office was close to mine and I missed him.

At that hearing, he summarised today’s fight to carry out journalism under the state of emergency, saying: “The story of those who think they have power, and who use this power to persecute journalists is as long as journalism itself.”

Last December, six journalists, including some of my friends, were held for 24 days in an inquiry into the hacking of minister Berat Albayrak’s emails. (Albayrak is President Recep Tayyip Erdogan’s son-in-law.) Three of these journalists were later formally arrested by the courts. During this time, detained journalist Mahir Kanaat became a father, but he was unable to see his child. Fellow detainee Tunca Öğreten was not given the right to send and receive letters, or see anyone except his close relatives. He had to propose to his girlfriend via his lawyers.

Recently, I listened to one of these journalists relate a memory from his time in court. Having had their faith in justice shaken, they instead turned to superstition in the courtroom in a bid to be set free. Metin Yoksu, a freed journalist, said three of them had sat close to the courtroom exit and had replaced their shoelaces – which had been taken from them – with laces they had made from bits of water bottles. The result: those who were freed were those who had sat near the exit door.

Trust in Turkey’s justice system has fallen so far that we now rely on our superstitions. How depressing.

This article is part of the spring 2017 issue of Index on Censorship magazine. You can read about all of the other content in the magazine here.

Journalist Canan Coşkun is a court reporter at Cumhuriyet. She is currently charged with defaming Turkishness, the Republic of Turkey and the state’s bodies and institutions in one of her articles. Her article covered the story of a truck full of weapons hidden under onions. The second charge is that she depicted the police who combat terrorism as a target, for a story about Turkish Kurds being arrested.

We are journalists, not terrorists

Valeria Costa-Kostritsky looks at a developing trend where journalists are being accused of terrorism and arrested for reporting the news.

As protests continue in Istanbul, journalist Yavuz Baydar calls for the media to resist government pressure to filter the news.

Writers from acclaimed independent newspaper Radikal on its closure and the shape of Turkish investigative journalism today.

The spring 2017 issue of Index on Censorship magazine looks at multi-directional squeezes on freedom of speech around the world.

Canan Coskun
Canan Coşkun is a Turkish journalist who works at the daily newspaper Cumhuriyet.
Latest posts by Canan Coskun (see all)