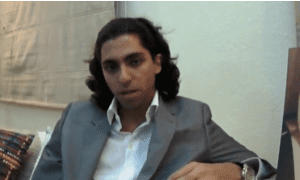 Saudi blogger Raif Badawi has been imprisoned for five years and flogged for exercising his fundamental right to free expression.

Join Index and others to mark the fifth anniversary of the arrest of Raif Badawi, a Saudi Arabian blogger and writer.

Badawi was arrested and detained in June 2012. In May 2014, Badawi was sentenced to ten years in prison, 1000 lashes, a huge fine, and two additional penalties – a ten-year travel ban and a ten-year ban from participating in visual, electronic and written media, both to be applied following his release.

Join a vigil at the Saudi Embassy

To mark the five-year anniversary of Raif Badawi’s arrest and the birthday of his lawyer Waleed Abu Al-Khair, who himself is currently serving a 15-year prison sentence, join a vigil at the Saudi Embassy in London to continue to call for their immediate release.

Representatives of English Pen, Bread and Roses TV, Council of Ex-Muslims of Britain, Index on Censorship, One Law For All, the Peter Tatchell Foundation and Reporters Without Borders will be present.

Participants are asked to meet at the Curzon Street entrance to the Embassy. (note: the postal address of the Embassy is 30-32 Charles Street, Mayfair, London).

Please keep sharing details of Raif Badawi’s case and calls for his release on social media. Follow @Raif_Badawi on Twitter and tweet your support with the hashtag #FreeRaif

3 responses to “Five years of injustice: Vigil for Raif Badawi”