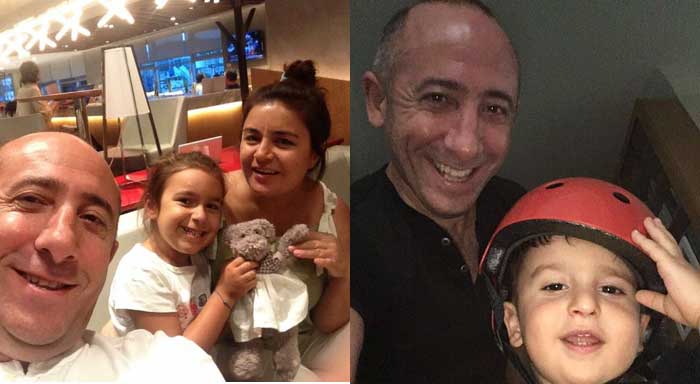 Journalist Murat Aksoy has been detained since his first arrest on 3 September 2016. Above, Aksoy with his wife Şehriban, daughter Zehra Duru and son Ali Emre.

Journalist Murat Aksoy was arrested twice during the government’s investigations into Turkey’s failed coup of 15 July.

On 6 June, prosecutors filed an indictment seeking two life sentences for Aksoy and 12 other defendants.

His first arrest was on 3 September 2016 on suspicion of being involved with the Fethullah Gülen network — an Islamist group allegedly behind the attempted coup, officially called the Fethullahist Terrorist Organisation (FETÖ) by the regime.

A court ordered Aksoy released on 31 March pending trial, but before he even left Silivri Prison he was detained again along with 13 others, this time on charges of “attempting to overthrow the government”.

The charges are baffling, according to his wife of 17 years, Şehriban Aksoy. “When the headscarf was banned, he always wrote articles against the ban. We are speaking of a man who stated at every opportunity that the state doesn’t have the right to interfere in anyone’s outfit.”

Except for a brief period at the Millet newspaper, Aksoy did not work at any news organisations believed to be affiliated with the Gülen group — something that is now considered a crime. He wasn’t even religious, according to Şehriban.

“Our families are from Tunceli, we are Alevi,” his wife says, referring to a religious minority group in Turkey, whose practices and beliefs often fall outside the scope of Islam, although there are those who argue that it is part of the faith. “Being an Alevi, he defended people’s right to wear the headscarf; their freedom. This [imprisonment] has happened to someone defending [this right]. He hasn’t written a single line in his entire life praising FETÖ.”

He has worked for many outlets. When they conducted the first wave of the post-coup arrests, he hosted a radio programme on YÖN FM, a pro-Republican People’s Party (CHP) radio station. A government minister once featured on his programme. He also worked for eight years at Yeni Şafak, a pro-government daily.

At the time of this dismissal, the couple’s son Ali Emre had just been born. “We needed an income. That’s why he agreed to write for Millet when the newspaper made an offer,” Şehriban said. The outlet was shuttered under the first cabinet decree issued under Turkey’s state of emergency rule, which was introduced after the coup attempt.

A life of journalism

Aksoy was born in 1968 in Erzincan, although his birth year on his ID card is 1972. It is a common practice in rural Turkey for children to sometimes be officially registered a few years after their actual birth.

According to his wife and many others who know him, Aksoy is a sentimental and emotional man who easily gets teary-eyed. This may be because of his background, Şehriban says. When Aksoy was young, his family moved to Istanbul where his father owned a grocery store. When he was in the first grade, his mother died after a long illness. With his father busy working, Aksoy was often left in the care of his father’s sister-in-law.

The family lived in Okmeydanı, a predominantly Alevi neighbourhood in Istanbul. This is where Aksoy and Şehriban met as children. “We both lived on the street where Berkin was shot,” Şehriban remembers, referring to Berkin Elvan, a 14-year-old boy who was injured during the Gezi protests when a police officer aimed a gas canister at his head. Elvan died following 269 days in a coma.

Aksoy attended the Kabataş High School in Istanbul. After graduation, he studied business management at Erciyes University in Kayseri, although he never worked in business. Shortly after graduating from the university in the early 1990s, he worked briefly for the newspaper Radikal, and then at various civil society organisations. During his time at the Islamist Yeni Şafak, where “he never hid his true identity [as an Alevi],” according to his wife.

Days filled with work and kids

Aksoy was fired by Yeni Şafak in the constrained atmosphere in the months after the anti-government Gezi Park protests of 2013. In the columns he wrote at the time, Aksoy had criticised the government’s brutal approach toward peaceful protesters. “They first cut his column down to fewer days. Then they slowly drove him away just the way they slowly drove us away from Silivri Prison that night,” his wife says.

He was finally terminated by the paper in early January 2014 when he expressed an opinion about the government’s handling of a political crisis following a December 2013 corruption scandal in which four ministers and members of President Recep Tayyip Erdogan’s family were implicated.

After he left Yeni Şafak, Aksoy worked exclusively from home. He would get up at around 7am, read the newspapers and take notes while having breakfast, and then send his daughter to school. He later worked in his study, writing articles or preparing for television programmes where he often appeared as a commentator. He would go grocery shopping or go on walks with his wife. When his daughter got home from school, Aksoy usually helped her with her homework.

In addition to writing for various newspapers, Aksoy worked as a consultant for the Republican People’s Party (CHP) and he was on the parliament payroll. This was an important means of financial support for the family, but it was cut off after his arrest by the parliament administration. Şehriban, who has to take care of two small children, doesn’t have a job.

The case against Murat Aksoy

Although Aksoy was arrested for aiding FETÖ through his work, his accusers “can’t cite a single article which serves this alleged purpose,” says Şehriban.

He is being represented by a prominent human rights lawyer, Yaman Akdeniz, who was nominated for a 2015 Freedom of Expression Award for his work defending online rights. Aksoy was also accused of having prior knowledge of the coup plot because he had warned viewers in a program on pro-CHP Halk TV that there were rumours of a coup preparation.

The night when Şehriban and her family waited for Aksoy’s release in vain has been a major trauma for the family. “It took me a full week to recover. You have these crazy thoughts, you say to yourself ‘let this end now’. It was like a nightmare,” she says. “While they were kept in police custody for 15 days in between their release and second arrest, I thought at least we could talk on the phone every two weeks when he was in prison, but they don’t let you do that in detention.”

For many of the families caught up in the coup trials, the hardest part is managing the feelings of their children. Aksoy and Şehriban have two, a son and a daughter: Ali Emre is two-years-old and Zehra Duru is 10.

Ali Emre’s second birthday took place about a month after her father was arrested. “He has been growing more quickly after his father’s arrest. He sometimes takes his father’s photograph to bed with him and kisses is,” Şehriban says. “The children miss their father immensely. I take them to see their father once a month during open visits.”

Aksoy also misses his children. “The last time we visited, Ali Emre bit his ear, but his father didn’t notice; he was so thrilled to be holding his son. I gave him a tissue, and he asked me why. He had no idea his ear was bleeding,” his wife says.

For the first few months of Aksoy’s imprisonment, the family told Duru that her dad had gone to a writers’ camp to work on a report with fellow writers. Into the fourth month, they had an honest conversation with her. “I explained to her that her father is a good man and he is in prison because of a thought crime. Now she knows, she says that her father is in prison because he defended what’s right,” Şehriban says.

The family was lucky in comparison with many others who were imprisoned in the coup-related trials: Duru’s friends at school didn’t stop talking to her.

The night when her father wasn’t released despite the court ruling was among the hardest moments for the little girl. “Duru wanted to drive with me to prison to pick him up. I convinced her to stay at home, and I said ‘your father will be here when you wake up in the morning’. I promised her,” Şehriban says. “The next morning, she woke up and started going into every room inside the house, looking for her father. It was perhaps more difficult than when he was arrested for the first time. Then she started yelling at me: ‘You are a liar, you lie!’ Our relationship was horrible for an entire month.”

Şehriban is thankful her husband isn’t mistreated in prison, but quickly adds that he and his fellow inmates don’t trust prison food. At meal times, they buy ready-made soup mixes and canned food from the prison cafeteria.

Not everything has been nightmarish through the ordeal. Opposition politicians have been supportive. CHP leader Kemal Kılıçdaroğlu publicly said of Aksoy: “I am as certain that he [is not related to any terror groups] as I am certain of myself.”

“But when they were arrested for the second time, I knew that this was something else. They couldn’t satisfy their wrath. They should just tell us that he is in prison because of his critical views. They did the same thing to Sözcü,” his wife says, referring to recent operations where two employees of the newspaper, which is staunchly secular and also outspokenly anti-government, were arrested on “FETÖ” related charges.

Sunlight in the doctor’s office

Although Aksoy was never subject to any physical abuse, he has had difficulty coping with being in prison. “He cried a lot,” remembers Şehriban.

Like most other journalists imprisoned in the coup investigation, Aksoy cannot see the other journalists kept at Silivri Section-9. He shares a cell with singer-turned-journalist Atilla Taş and journalist Gökçe Fırat Çulhaoğlu, and those are the only two people whom he can have conversations with. They are allowed in the open-air briefly in very tiny courtyards, which are covered by wired fences all around, making it impossible to get a full view of the sky.

Aksoy has started seeing the prison psychiatrist. He finds the sessions helpful, but what he enjoys most is visiting the doctor’s office. As Şehriban explains: “You get to see a different scenery. For example, there is an artificial plant in the room, which makes him really happy. There are medicine cabinets; files with the names of his fellow journalists on them. Also, at the doctor’s office, he says gets a lot of sunlight. He says he deliberately places his chair in the sun; that he regrets those days when he never once even looked up in the sky when he was free.”