TURKEY UNCENSORED
Ahmet Altan: I am not your defendant
05 Oct 2017
BY INDEX ON CENSORSHIP 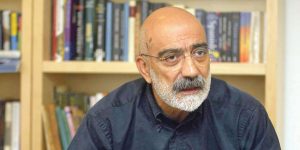 Ahmet Altan is one of over 150 journalists who is in detention in Turkey. Altan stands accused of “attempting to overthrow the government” and “attempting to eradicate the parliament” and they face three counts of life sentences without the possibility of parole.

Altan, who testified on 19 September through the judicial teleconferencing system from Silivri Prison, mainly addressed the presiding judge. The next hearing in his case will take place on 13 November.

The belief that makes people gather around a religion is rooted in their trust in the honesty of God.

Lying would deprive God of his divinity.

In ancient times, even a pagan tribe that worshipped a pear tree believed in the tree’s honesty; that it would bear the promised fruit at the promised time.

Ever since people were created they have gathered around authority, worshipped it and entrusted themselves to it.

People who don’t trust each other, who divide into groups, tribes, and clans, can only come together around an authority which they trust to be honest.

The honest authority which enables the millions to turn into a nation and establish a state is not one of politicians, soldiers, executives, or political parties.

That honest authority, that great source of trust, resides in the judges.

The magical link that turns millions of dispersed pearls into a necklace is the honesty of those judges.

In the same way that removing the oxygen atom from a water molecule turns the very source of life into one of death, removing the judges from the state turns it into an armed gang.

If there are no judges then there is no state.

What distinguishes a state from an armed gang is the presence of judges.

Well, then what makes this ever so vitally important judge a judge?

What makes a judge a judge is their possession of an almost godly honesty and the people’s undoubting belief in that honesty.

A judge would lose their qualification as judge the moment they were to lie in court.

A judge demolishes the state as they demolish their qualification as a judge by lying in court.

A year ago, Mehmet Altan and I were arrested on the charges of “giving subliminal messages to the putschists.”

Later on, this ridiculous allegation disappeared and we were sent to prison on the charges of staging the coup on 15 July and attempting to overthrow the government with weapons.

We are said to have staged an armed coup d’état.

This is the crime we are charged with.

This is a case in which the absurdity of the allegation overwhelms even the gravity of the charges.

Now, I’ll say something loud and clear to this court, to this country and to those around the world who have taken an interest in this trial:

Show us even a single piece of concrete evidence of the strange allegations against us, and I will not defend myself anymore. Even if I am sentenced to the gravest penalty I will not appeal the ruling.

I am saying this loud and clear.

Show me a single piece of evidence and I will waive my right to appeal.

I will submit to spending the rest of my life in a prison cell.

During this past year, which we spent in prison, a judge ruled each month for the continuation of our imprisonment by claiming that “there was solid evidence” against us.

In the previous hearing, you, too, said there was “concrete evidence” against us.

Since you declared with such ease that there was solid evidence, that evidence needs to be in our case files.

Come on, show that solid evidence to us and to the rest of the world – the evidence which proves that we staged a coup on 15 July.

You won’t be able to show it.

Both you and I know that there is no such evidence.

Because these allegations are utter lies.

Go ahead, disprove what I have been saying, pull out that piece of evidence and show it to us.

There are some difficult aspects to arresting people on nonsensical allegations, Your Honour, and now you are confronted with those difficulties.

Or, you will insist on saying “there is solid evidence” while there is no solid evidence and thus lose your integrity and your qualification as a judge?

And with you, the state will lose its qualification as a state.

Thereby we will cease to be defendants.

Because a state, if it is to be a state, needs evidence to put a person on trial.

Only armed despots lock people away without evidence.

If you continue trying and incarcerating us without evidence you will demolish the judiciary and the state.

You will be committing a serious crime.

Turkey will turn into a jungle of thuggery and despotism, where the guilty try the innocent.

Now, you need to decide whether you are an honest judge or a criminal.

If you accept an indictment that makes such absurd allegations and declare “there is solid evidence” while there isn’t even a single piece of evidence, you’ll discover life’s capriciousness and will put yourself on trial while thinking you are trying us.

I wait for your decision.

As an aged writer, one much more experienced than you are, my advice to you is to save yourself, save your profession, and save your state.