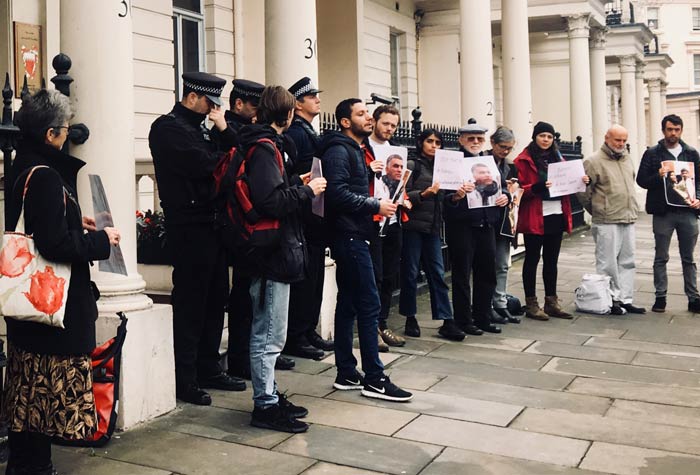 Protesters call for freedom for Nabeel Rajab outside the Bahraini embassy in London.

Nabeel Rajab’s sentence to two years in prison for speaking to journalists was upheld on 22 November 2017 by a Bahraini appeals court at the conclusion of a long-running, unfair trial.

Rajab will serve his sentence at notorious Jau Prison until December 2018, by which time he will have actually spent two and a half years in prison. He faces up to 15 years in prison in a second case related to his comments on Twitter, with the next hearing on 31 December. Index on Censorship and the Bahrain Institute for Rights and Democracy (BIRD) condemns Rajab’s imprisonment, which is a reprisal against his work as a human rights defender, and calls for his immediate and unconditional release.

Rajab was sentenced in absentia on 10 July 2017 on charges of “publishing and broadcasting fake news that undermines the prestige of the state” under article 134 of Bahrain’s Penal Code. This is in relation to statements he has made to media that:

In the last appeal court hearing on 8 November, the judge refused to allow the defence’s evidence, which included testimonies of high-profile journalists and researchers who had been banned from entering Bahrain.

Sayed Ahmed Alwadaei, Director of Advocacy, BIRD: “This is a slap in the face of free expression and tragically proves Nabeel’s point that the justice system is corrupt. Bahrain’s rulers are fearful of the truth and have lashed out against it once again. This Bahraini repression has been enabled by their western allies in the US and UK.”

Jodie Ginsberg, CEO, Index on Censorship: “This is an outrageous decision. Nabeel has committed no crime. Bahrain needs to end this injustice and its harassment of Nabeel.”

The Bahraini courts have failed to provide Rajab, the president of the Bahrain Center for Human Rights (BCHR), a fair trial at every turn. He has been prosecuted for his expression, as protected under article 19 of the Universal Declaration of Human Rights and International Covenant on Civil and Political Rights. During his hospitalisation earlier this year, multiple court hearings were held in Rajab’s absence, including his sentencing in July.

Rajab had a separate hearing on 19 November 2017 in a concurrent case relating to his tweets about torture in Bahrain’s notorious Jau Prison and the Saudi-led coalition’s war in Yemen, for which he faces up to 15 additional years in prison. The court heard a prosecution witness, who had already appeared in a previous hearing last year, and who was not able to provide any evidence against Rajab. The trial was adjourned to 31 December 2017, when the security officer who confiscated Rajab’s electronic devices for another case will be brought as a prosecution witness. The next court hearing will be the eighteenth since the trial began.

Rajab also has been charged with “spreading false news” in relation to a letter he wrote to the New York Times in September 2016. A new set of charges were brought against Rajab in September 2017 in relation to social media posts made in January 2017, when he was already in detention and without internet access.

The human rights defender was transferred to Jau Prison on 25 October 2017, having been hospitalised the previous six months, since April, after a serious deterioration of his health resulting from the authorities’ denial of adequate medical care and unhygienic conditions of detention. Rajab was subjected to humiliating treatment on arrival at the prison, when guards immediately searched him in a degrading manner and shaved his hair by force. Prison authorities have singled him out by confiscating his books, toiletries and clothes, and raiding his cell at night. Rajab is isolated from other prisoners convicted for speech-related crimes and is instead detained in a three-by-three meter cell with five inmates. Prison officers have threatened him with punishment if he speaks with other inmates, and he is not allowed out of his cell for more than one hour a day.

One of Rajab’s outstanding charges is that he spoke out about the degrading treatment in Jau Prison.The evidence he and BCHR gathered proving torture in the prison was exposed in a joint-NGO report, Inside Jau, in 2015. Human Rights Watch also reported on the same incidents of torture.

The upholding of the sentence means Rajab will be imprisoned at least until December 2018, by which time he will have spent 30 months in prison. This itself reflects the unfair court procedures: Rajab was first arrested in June 2016 and charged with spreading fake news in media interviews. However, the prosecution did not begin investigating his charges until six months into his detention, in December 2016.

The UK Foreign and Commonwealth Office has avoided expressing concern over Nabeel Rajab’s sentencing in its answers to four parliamentary questions since July. In their latest statement, they stated: “We continue to closely monitor the case of Nabeel Rajab and have frequently raised it with the Bahraini Government at the highest levels.”

25 British MPs have condemned the sentence.

In September 2017, the UN condemned the increasing number of Bahraini human rights defenders facing reprisals, naming nine affected individuals, Rajab among them. The UN Committee Against Torture has called for Rajab’s release.

Yesterday, fifteen international and local NGOs wrote to states including the UK, US, EU, Norway, Germany, France, Italy, Denmark, Sweden, Ireland and Canada urging them to call for Nabeel Rajab’s immediate and unconditional release. Their voices were joined by protesters in London. In Washington D.C., a petition signed by 15,000 people calling for Rajab’s release was delivered to the Bahrain embassy.