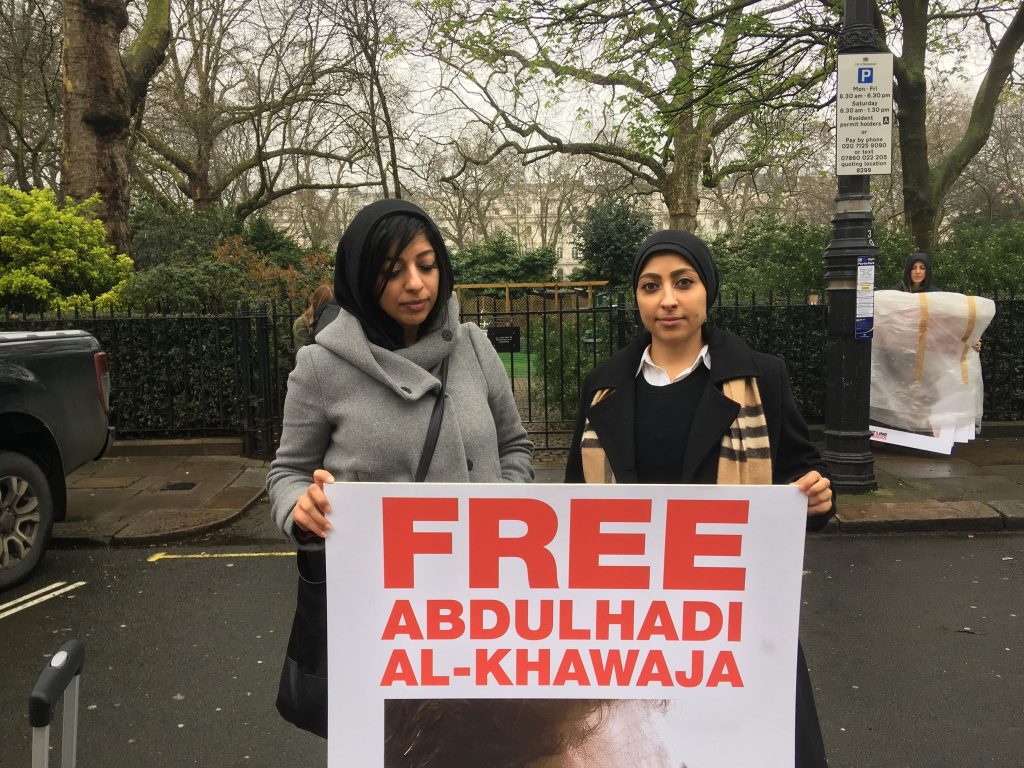 The daughters of Abdulhadi al-Khawaja, the co-founder of Bahrain Centre for Human Rights, participated in a demonstration on Monday 9 April outside the Bahrain Embassy in London calling for his release on the seventh anniversary of his arrest.

Maryam and Zainab al-Khawaja joined NGOs and fellow supporters, as they chanted “free free Abdulhadi” and held placards with a picture of the Bahraini human rights activist.

It marked seven years since Abdulhadi al-Khawaja, founder of the 2012 Index on Censorship Freedom of Expression Award-winning Bahrain Centre for Human Rights, was imprisoned for his involvement in peaceful pro-democracy protests that swept the country during the Arab Spring. On 9 April 2011 twenty masked men broke into his house, dragged him down the stairs and arrested him in front of his family.

Bahrain has a poor track record on human rights, with many reports of torture and human rights defenders in jail. Al- Khawaja was part of the Bahrain 13, a group of journalists and activists who faced unfair trials following the unrest.

During his time in prison, Al-Khawaja has been tortured, sexually abused and admitted to hospital requiring surgery on a broken jaw.

His daughter Maryam al-Khawaja was imprisoned in Bahrain for a year before leaving the country in 2014. She faces prosecution on charges including insulting the king and defamation. She told Index: “For me, this isn’t just about my dad, it’s a reminder that we have thousands of prisoners in Bahrain, and we need to remember all of them, and we need to be fighting on behalf of all of them. These are all prisoners of conscience.”

A number of prominent Bahraini campaigners took part in the demonstration.

Jawad Fairooz, a former Bahrain MP and president of SALAM for Democracy and Human Rights, said: “We’re here to support Abdulhadi as a symbol of the demand of the people of Bahrain who want to live in the country with dignity and freedom.”

Sayed Ahmed Alwadaei, director of advocacy at the Bahrain Institute for Rights and Democracy and an activist who fled the country following torture, said: “I’m proud to belong to a nation that Abdulhadi is a part of. Abdulhadi to me is one of the most inspirational individuals.”

Cat Lucas, programme manager at English Pen’s Writers at Risk initiative, said that the government could be doing a lot more to challenge what is going on in Bahrain. She hopes the Bahraini Embassy will finally act, not just in the case of al-Khawaja, “but in the case of lots of writers and activists who are imprisoned for their peaceful human rights activities”.

Protesters have gathered outside the Embassy once a month since January 2018 to highlight the dire human rights situation and ask the UK government to take action.

Al- Khawaja’s daughter Zainab called on the UK to hold the Bahraini regime accountable: “Major governments are still supporting the Bahraini regime with weapons and political training. They’re the people behind them. I can feel as angry here as I would protesting in Bahrain, because I know what the government here is responsible for. I know one of the reasons people are being killed and tortured in Bahrain, including my father, is the support from the British and American governments.”

A group of NGOs, including Index on Censorship and Pen International, signed a letter last week calling on Bahrain to cease its abuse of fundamental human rights.They asked the authorities to immediately and unconditionally free Abdulhadi, provide proper access to medical care and allow international NGOs and journalists access to Bahrain.