PRESS RELEASE
Media freedom in the US under threat, report finds
03 May 2018
BY INDEX ON CENSORSHIP 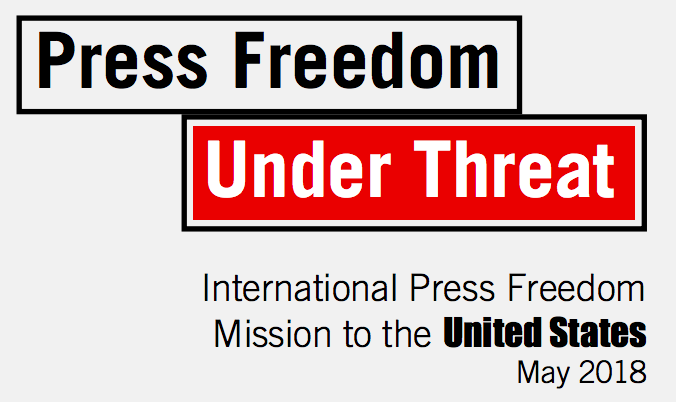 The United States media – one of the best protected in the world – is facing challenges that threaten the freedom of the press. This is the finding of an unprecedented press freedom mission that took place in January 2018, one year after President Donald J. Trump’s inauguration.

The mission’s report was published on May 3, 2018, World Press Freedom Day. It shows that President’s Trump’s attacks on the media, via his Twitter account and in press conferences, are exacerbating an already hostile environment for journalists in the US.

By openly and aggressively accusing journalists and media outlets of lying and producing ‘fake news’, the current US administration risks undermining the First Amendment and creating a culture of intimidation and hostility where journalists find themselves less safe.

However, the report also identifies threats to the media that pre-date Trump. Many were present under the Obama administration, which used the Espionage Act 1917 to bring a record number of whistleblower prosecutions.

Other major threats to media freedom in the US include:

“The pressures that journalists are facing in the US are reflective of the toxic atmosphere toward journalism being stoked by global leaders. Animosity toward the press is undermining the public’s right to information.”

“The President’s hostility towards the press is trickling down to states and local communities, where officials are refusing interviews, denigrating the press, and obstructing access to information.

“This report should be a wake-up call to everyone—especially those in power—to the very real threats to freedom of the press in the U.S.”

“The alarming rise in threats to press freedom in the US over recent years must be challenged. Not only do these threats impact on freedom of expression in the US, but they have repercussions around the world.

“A free press is a vital part of democracy. The rights of US journalists must be protected so that they can continue to report freely on matters of public interest and hold the powerful to account.

“Members of IFEX know from experience that efforts to control, degrade and disable a free press will always be met with great gestures of solidarity and resistance, and it will be no different in the US.”

“This joint report highlights the very real threats journalists are facing in the country of the First Amendment. But what is increasingly alarming is President Trump’s constant media bashing. Trump himself is dangerous for press freedom, but the Trumpisation of the treatment of journalists at the local level is equally, if not more, dangerous.”

“All across the US we are feeling the effects of a relentless attack on the role of the press in our society. The constant bashing out of Washington is emboldening local officials to obstruct and interfere with the important watchdog role of the media.  It is clearly an attempt to discredit the media in an attempt to divert attention from government mismanagement or wrongdoing. A great America depends on unfettered freedom of the press”

The full report is available here.