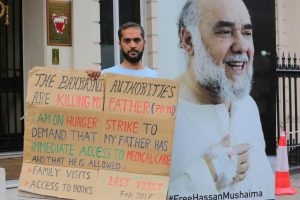 The Bahraini human rights mechanisms have largely failed to properly address concerns raised on behalf of Hassan Mushaima, and his life remains at risk. Because of this, his son, Ali Mushaima, is on a hunger strike outside of Bahrain’s Embassy in London.

Bahraini campaigner Ali Mushaima is returning to his protest site outside the Bahrain embassy in Knightsbridge, London, 24 hours after being hospitalised. Mushaima is on day 31 of a hunger strike in opposition to the treatment of his 70-year-old father Hassan Mushaima, who was locked-up in 2011 as part of the crackdown in Bahrain.

On Thursday Mushaima left the site in an ambulance and was taken to St Thomas’s Hospital in Westminster to receive treatment at around 14:30. He spent the night with his family. Since the beginning of his protest on 1 August, Mushaima has lost 13 Kg having only taken juices and milk. Mushaima’s doctor, who paid him a visit outside the Embassy on 29 August night, said his health conditions were critical, and that his body temperature and sugar level where extremely low. Over the 24 hours before being hospitalised, Mushaima developed chest and abdominal pain. According to his medical report, when the ambulance arrived, his blood sugar had dropped to 3.1. While in hospital, Mushaima did not consume any solid foods.

Mushaima is demanding basic rights for his father, including medical assistance, family visitation rights and access to his books. These have all been denied to him by the regime, which continue to violate Hassan Mushaima’s rights under UN minimum detention standards (known as Mandela Rules).

On 28 August, Mushaima received a call from his father who informed him that he was taken to the hospital for cancer screening. This came after two years in which the Bahraini authorities have denied him access to an oncologist. It appears that all of Hassan’s books, personal notes, writing material and even the Quran have been destroyed after being confiscated without “any legal or logical justification” in October 2017. The authorities appear to have taken this action even though the materials were previously approved by the prison administration. This information was provided to a fellow inmate by a prison officer while Hassan was at the hospital.

Mushaima has received cross-party support for his demands. Support came also from SNP Ian Blackford, who  called on the Secretary of State to step in and demand Hassan Mushaima’s release. The co-leaders of the Green Party, Caroline Lucas MP and Jonathan Bartley, have additionally written to MENA Minister Alistair Burt to demand intervention.

BIRD has written to the Foreign Office to express concerns that it is relying on assurances by the Bahraini government and the UK-trained National Institute for Human Rights (NIHR) in Bahrain. Through its technical assistance programme, since 2012 the UK government has been funding various institutions in Bahrain that are complicit in the denial of adequate medical treatment, including the NIHR.

Ali Mushaima said: “I am returning to the embassy today to continue my protest. My demands are so basic and could all be granted tomorrow. The way the regime has treated my father is appalling. My body is weak, but this protest is my last resource, and if this is what it takes for them to treat my father humanely, then I will not stop until he is given the treatment he needs, family visits and access to his books. These are non-negotiable rights that should be afforded to all prisoners.”

BIRD Director of Advocacy, Sayed Ahmed Alwadaei said: “The UK has now become part of the problem, rather than a solution. It’s been a month since Ali started his hunger strike, only to find out that the UK will not call for an end to the cruelty Bahrain is subjecting him and his family to. Instead, the UK has decided to back the lies of a government that is deliberately denying a 70-year-old man his most basic human rights.”

In response to Mushaima’s hunger strike, Hassan Mushaima received a cancer scan and has been given access to vital medication that was previously unavailable to him, but several issues remain: