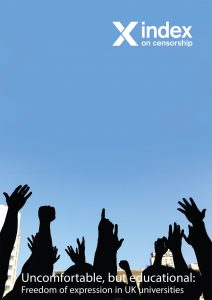 The full report can be read here.

A narrative of safety and risk is hampering freedom of speech on UK university campuses, a new report has found.

‘Uncomfortable but educational‘ — a short report and guide on the laws protecting free speech in universities by freedom of expression campaigners Index on Censorship — calls for more to be done to create an environment in which free speech is promoted as an equal good with other statutory duties. It also identifies Prevent as a key issue.

The report argues that universities should strengthen and simplify codes of practice to clarify  their responsibilities and commitment to protecting free speech on campus. It also urges student unions to reaffirm a commitment to freedom of expression in their policies and remove “no-platforming” guidelines that involve outlawing speakers who are not members of groups already proscribed by government.

The report identifies the implementation of Prevent — which places obligations on universities to stop students being drawn into terrorism — as having a pernicious effect on freedom of expression and academic freedom in higher education and calls for an immediate independent review of the policy.

Despite near-daily news stories about attempts to shut down free speech on campus, the report finds that the environment for freedom of expression is poorly understood. Incidents are often misreported, while others — especially levels of self-censorship — are not reported publicly at all. A better understanding of the levels of explicit and implicit censorship on campus, coupled with the development of strategies for the better promotion of freedom of expression and at pre-university level are identified as crucial for ensuring free speech is protected.

The report draws on interviews and research of the sector over the past three years and in particular offers a guide to the legal protections and duties related to freedom of expression. It finds that often duties and rights such as those related to safety are presented as trumping those related to free speech, creating a risk-averse culture in which free speech is seen as a less important right.

“Protecting and promoting freedom of expression should be at the heart of what a university does – not an afterthought,” said Index on Censorship chief executive Jodie Ginsberg. “We want to encourage everyone to consider this as a core value – rather than one that is secondary to other rights and responsibilities.”

For more information or to arrange an interview, please contact Jodie Ginsberg at [email protected] or 020 7963 7260.

The full report can be accessed online or as a PDF.