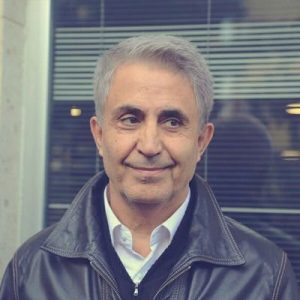 In November 2016 Musa Kart was one of a number of staff from the Cumhuriyet newspaper arrested without charge. He and his colleagues’ subsequent months in Silivri prison would be described as unlawful by the UN Working Group on Arbitrary Detention, “being in contravention of articles 10, 11 and 19 of the Universal Declaration of Human Rights and of articles 14, 15 and 19 of the International Covenant on Civil and Political Rights”.

In April 2017 he was formally indicted with “helping an armed terrorist organization while not being a member” and “abusing trust”, prosecutors stipulating a maximum sentence of twenty-nine years. His trial began in July 2017. His funny, excoriating opening statement is worth reading in full.

After twelve months of court proceedings (arduous litigation being a well-worn censorious tactic) Kart was eventually found guilty and sentenced to three years and nine months. The appeals lodged on behalf of all those who received shorter sentences during the Cumhuriyet trials failed in February this year. Kart was informed he would be required to go to prison for one year and sixteen days.

On April 25th he and five colleagues – board members Önder Çelik and M.Kemal Güngör, news director Hakan Kara, columnist Güray Öz and financial officer Emre İper – decided to hand themselves in at Kandıra prison, a typically dignified and brave gesture.

Musa’s ultimate incarceration represents the culmination of fifteen years of persecution by then prime minister, now President Recep Tayyip Erdoğan, who twice tried and twice failed to use court action to silence the cartoonist in 2005 and 2014.

As those who have followed recent history in Turkey will be aware, the attempted coup of July 2016 and the subsequent state of emergency provided Erdoğan the pretext required to round up many of his perceived enemies in academia, local government, the military, press and media. His victory in the April 2017 referendum, granting the president greater powers, and subsequent re-election in 2018 have only entrenched his position. In survey after survey Turkey remains the world’s number one jailer of journalists.

Kart is a past winner of CRNI’s Courage in Editorial Cartooning Award, was given the Cartooning For Peace Swiss Foundation’s Prix International du Dessin de Presse last year and is currently the subject of a retrospective exhibition at the Maison du Dessin de Presse, Morges. He formally retired from cartooning in December 2017.

The undersigned organizations join Index and CRNI in calling for the immediate release of Musa Kart and his five courageous colleagues and the dismissal of all charges against the criminalised former staff of Cumhuriyet. This World Press Freedom Day we express our solidarity with all those suffering in the protracted and unprecedented crackdown on freedom of expression in Turkey, and call for its end.

Let them know they are not forgotten