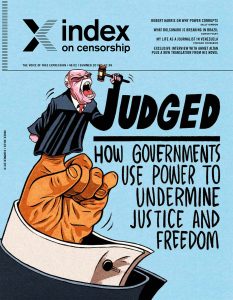 In a world when journalists are operating in increasingly harsh and difficult conditions, and are hit by lawsuits to stop them doing that, they need lawyers independent enough to stand up with them in court. This is an issue that the latest edition of Index on Censorship magazine looks at in detail.

“While at a conference, I spoke to journalists under extreme pressure. They told me: ‘When the independence of the justice system is gone then that is it. It’s all over.” We need to make a wider public argument about the importance of the judiciary. It’s something we should all be talking about in the local cafe. The average citizen needs to be vigilant to make sure the line between those making the laws and those sitting in judgement is not blurred. Our fundamental rights depend on it,” Rachael Jolley, editor of Index on Censorship, said.

In the latest magazine we look at a global phenomena where powerful governments are trying to unpick the independence of legal systems, to bring them under more direct influence, and the implications for global freedom of expression and freedom of the media.

With contributions from Kaya Genc in Turkey; Stephen Woodman on the Mexican government’s promises to rebuild the pillars of democracy and what hasn’t happen; Jan Fox on Donald Trump’s trampling of democratic norms; Karoline Kan on China’s retaliation against lawyers who argue for human rights, Caroline Muscat on independent news in Malta, Melanio Escobar and Stefano Pozzeban on Venezuela’s abuse of judicial power, Viktoria Serdult on how the Hungarian prime minister is pressurising independence in all its forms, Silvia Nortes on the power of the Catholic church in increasingly secular Spain.

In China, hundreds of human rights lawyers are in prison; in England and Wales, it has become more of a financial risk for ordinary people to go to court; in Brazil, the new president has appointed a judge who was very much part of the election campaign to a super-ministerial role. In Turkey, the Erdogan government is challenging the opposition candidate’s win in Istanbul’s mayoral elections. Hungary’s Orban has been set out plans to introduce new types of courts under the nose of the EU (although there appears to have been a U-turn).

We have an exclusive interview with imprisoned author and journalist Ahmet Altan, who was accused of inserting subliminal messages in support of the attempted July 2016 coup into a television broadcast and was sentenced to life in prison, told us: “I came out against the unlawful practices of both the era of military tutelage and that of the AKP [the ruling Justice and Development Party]: I believe I am a target of their anger.” The issue also includes the first English translation of an extract from his 2005 novel The Longest Night.

“Ahmet’s case is a perfect illustration of what can happen when the rule of law and courts are aligned with the political will of an increasingly authoritarian government,” Jolley commented.

About Index on Censorship Magazine

Since its establishment in 1972, Index on Censorship magazine has published some of the greatest names in literature including Samuel Beckett, Nadine Gordimer, Mario Vargas Llosa, Hilary Mantel and Kurt Vonnegut. It also has published some of the greatest campaigning writers of our age from Vaclav Havel to Amartya Sen and Ariel Dorfman plus journalism from Mexico, Argentina, South Africa, China, India, Turkey and more. Editor Rachael Jolley was named British Society of Editors’ editor of the year in the specialist publication category (2016) and the magazine has received numerous awards including the APEX Award for Excellence and the Hermann Kesten prize.

A complete digital replica of the magazine

Available at these bookshops