STATEMENT
Urgent appeal in relation to the arrest and detention of Omoyele Sowore, Nigerian journalist and human rights defender

Joy Hyvarinen, head of advocacy at Index on Censorship said: "Index on Censorship urges the Nigerian authorities to release the prominent journalist and campaigner Omoyele Sowore immediately. The arrest and detention are a shocking violation of Mr Sowore's human rights, which calls into question Nigeria's willingness and ability to meet international human rights obligations." 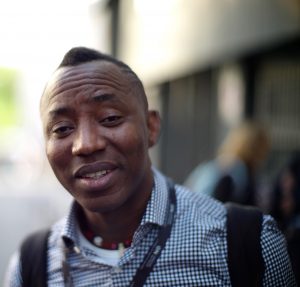 To the members of the Working Group and the Special Rapporteurs:

Commission Cotonou Declaration on strengthening and expanding the protection of all Human Rights Defenders in Africa.

Challenging government corruption and speaking truth to power has been the constant thread throughout Mr Sowore’s career, from the leading of student protests in the 1990’s to his recent campaign running for Presidential office in Nigeria.

The objective of the protest was to demand that the Nigerian government end corruption and economic inequality and guarantee education to all. That the protest Mr Sowore and the Coalition for Revolution (CORE) movement he founded called for was a peaceful one is made clear at the very outset of the call for protest, issued on 27 July, which starts by setting out the “rules of engagement”:

We eschew all forms of violence. No protester should throw any object as little as stones or attack any security officials. We are aware of their intent to provoke the mass unduly by using undue tactics and sponsored agents, so as to give the protest a bad name. We encourage all Nigerians to remain calm as we are ready to fight these injustices to a logical conclusion.

Please do not hesitate to contact us if you have any questions or if we can provide you with any additional information you may need.

Committee for the Defence of Human Rights (CDHR)

5 responses to “Urgent appeal in relation to the arrest and detention of Omoyele Sowore, Nigerian journalist and human rights defender”