Index on Censorship was established in 1972 in a febrile period: Idi Amin had taken power in Uganda, the Vietnam war continued, direct rule was imposed in Northern Ireland, there was a coup in Bolivia and Congo was renamed Zaire by its dictator president. As writer Robert McCrum said in our 40th anniversary issue: “The abuses of freedom worldwide in the 1970s were so appalling and so widespread that the magazine rapidly found itself in the frontline of campaigns. Index became a clarion voice in the cause of free expression.” The right to protest and freedom of expression are now being sought in Hong Kong and elsewhere, and Index is still to the forefront in reporting abuses. Here are just some of the conflicts between freedom and dictatorship we have reported on in the past 47 years. 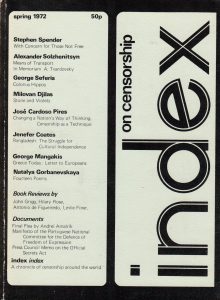 The first issue of Index on Censorship magazine, in March 1972

In an anonymous article about life in Greece under the regime of the Colonels’ junta, the writer considered the psychology of the situation; the feelings and attitudes, the long-ranging impact of this harrowing experience. “There is nothing more demoralizing than to be bound to a public body, an administration, a government with which one can never for a moment identify, which is the exact opposite of everything one believes in. One cannot live side by side with Philistinism, chauvinism, bigotry, blatant hypocrisy, crass ignorance, injustice, violence and brutality and not be affected by them, even if one manages—only just—to keep them out of one’s own life. Under this regime there is no relief; no exception: the regime has penetrated every single aspect of public life.” 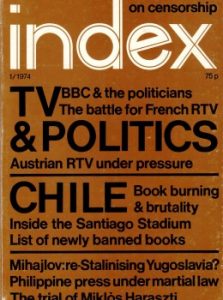 A fascinating insight into life in Chile six months after a coup ended the tyranny of President Salvador Allende: worse was to come under a military dictatorship, reported Michael Sanders, an Englishman in Santiago. “When Allende left Chile to address the UN in December 1972, a leading opposition newspaper had as its front-page a photo depicting the president flushing himself down a lavatory, with the caption ‘ good riddance’. The contrast in December 1973 is gloomy indeed. Not so much, or not only because of the drab uniformity of censored newspapers that, for all they may be censored, willingly reflect the views of the Military Junta. But for the fact that 43.6% of the population have been deprived of all means of expression, of all normal communication, and live in daily fear of their lives and jobs.”

William A Hachten reports: Black journalists came to the fore in the Soweto riots of 1976 when they reported from the ghetto for a white press without access. Yet black journalists still faced daily harassment under apartheid, which worsened with the death of Steve Biko in 1977. Vusi Radebe, a black stringer for the Rand Daily Mail, said: “The situation is worse since the 1976 riots. Police will beat up reporters on the slightest provocation for what they consider obstruction of justice.” While whites had 23 newspapers, there were none for non-whites to express their political frustration. Black journalist Pearl Luthuli said: “The black journalist can’t be objective. We try to tell it like it is but the white editors won’t print it.” Another said: “We are black people first, journalists second. If it comes to a conflict between the struggle and the job, the struggle comes first.”

“Censorship was planned by the regime of the Islamic Republic even before the February 1979 revolution brought Ayatollah Khomeini’s theocratic oligarchy to power. This particular kind of censorship may not be without precedent in history, but it must certainly be rare. There were attacks on coffee-houses, restaurants and other public places by men armed with clubs and stones; unveiled women were harassed; slogans of the opposition were cleaned from the walls; banks, cinemas and theatres were burned” – a personal account of the first years of the revolution and its attack on culture, by one of Iran’s leading writers Gholam Hoseyn Sa’edi. “And it keeps on happening. The Islamic regime of today has gone a step beyond censoring the creations of science, culture and art, beyond censoring life itself: it has rendered life vain and all but unliveable.” 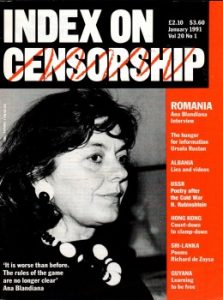 Romania’s celebrated poet, Ana Blandiana, on censorship under Ceausescu and how she fought back. Her work was completely banned three times. “In my case, the form of censorship progressed from the banning of a word to that of a line, then of a poem, then of a book, to the total erasure of my signature as author: an eradication of identity. My inner freedom was assured by a decision I took in 1980, a personal one rather than as a writer. I decided to be outspoken and say what I thought at the risk of becoming a victim myself, rather than suspect a possibly honest person. At first it kept me sane, and then it helped me to be a normal writer, relatively free of self-censorship. This was the strongest form of censorship under Communism in the last 10 or 15 years, and was much more refined and subtle than the official censorship.” 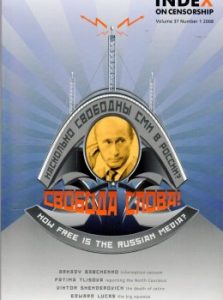 How free is the Russian media? Index on Censorship, Spring 2007

“The fact remains that since the departure of the oligarchs, Russian media freedom has gone from the imperfect and beleaguered to the moribund. At national television, which 90 per cent of Russians say is their main source of news, editors receive weekly or even daily instructions from the Kremlin on the ‘line to take’ on important stories; around half of Russian viewers think that what they watch is objective, a 2007 poll said. Foreign coverage is polemical and outrageously politicised. The message of all this is ‘be quiet’. If you annoy the rich and powerful you face threats, beatings or death. Even when the Kremlin is not directly involved, its reaction to the persecution of journalists sends a clear message: if you offend the powerful, don’t expect the law to protect you.” Edward Lucas gave an early taste of what freedom of expression meant under Putin. 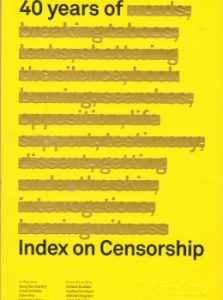 Robert McCrum on the 40th anniversary of Index on Censorship. “The success of Index was not a foregone conclusion. Stephen Spender, its founder, was fully alert to the potential for windbaggery and failure. There was, he wrote, ‘the risk that the magazine will become simply a bulletin of frustration’. Actually, the opposite came to pass. Index became a clarion voice in the cause of free expression. The abuses of freedom worldwide in the 1970s were so appalling and so widespread that the magazine rapidly found itself in the frontline of campaigns. Perhaps the most important thing Index did, from the beginning, was to universalise an issue in peril of becoming a special interest: freedom was not ‘a luxury enjoyed by bourgeois individualists’. Along with self-expression, it was a human right, and an instrument of human consciousness. 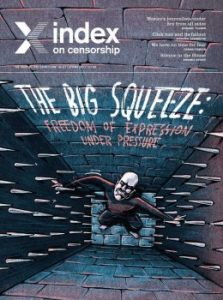 The spring 2017 issue of Index on Censorship magazine looks at how pressures on free speech are currently coming from many different angles, not just one. Special features on how to spot fake news, articles from former BBC World Service director Richard Sambrook and former UK attorney general Dominic Grieve, an exclusive interview with the Spanish puppeteer arrested last year, and fiction from award-winning writer Karim Miské.