MAGAZINE
Contents - Complicity: Why and when we chose to censor ourselves and give away our privacy
30 Mar 2020
BY INDEX ON CENSORSHIP 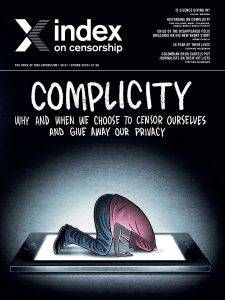 The Spring 2020 issue of Index on Censorship magazine looks at our own role in free speech violations. In this issue we talk to Swedish people who are willingly having microchips inserted under their skin. Noelle Mateer writes about living in China as her neighbours, and her landlord, embraced video surveillance cameras. The historian Tom Holland highlights the best examples from the past of people willing to self-censor. Jemimah Steinfeld discusses holding back from difficult conversations at the dinner table, alongside interviewing Helen Lewis on one of the most heated conversations of today. And Steven Borowiec asks why a North Korean is protesting against the current South Korean government. Plus Mark Frary tests the popular apps to see how much data you are knowingly – or unknowingly – giving away.

In our In Focus section, we sit down with different generations of people from Turkey and China and discuss with them what they can and cannot talk about today compared to the past. We also look at how as world demand for cocaine grows, journalists in Colombia are increasingly under threat. Finally, is internet browsing biased against LBGTQ stories? A special Index investigation.

Our culture section contains an exclusive short story from Libyan writer Najwa Bin Shatwan about an author changing her story to people please, as well as stories from Argentina and Bangladesh.

Buy a copy of the magazine from our online store here.

Willingly watched by Noelle Mateer: Chinese people are installing their own video cameras as they believe losing privacy is a price they are willing to pay for enhanced safety

The big deal by Jean-Paul Marthoz: French journalists past and present have felt pressure to conform to the view of the tribe in their reporting

Don’t let them call the tune by Jeffrey Wasserstrom: A professor debates the moral questions about speaking at events sponsored by an organisation with links to the Chinese government

Chipping away at our privacy by Nathalie Rothschild: Swedes are having microchips inserted under their skin. What does that mean for their privacy?

There’s nothing wrong with being scared by Kirsten Han: As a journalist from Singapore grows up, her views on those who have self-censored change

How to ruin a good dinner party by Jemimah Steinfeld: We’re told not to discuss sex, politics and religion at the dinner table, but what happens to our free speech when we give in to that rule?

Sshh… No speaking out by Alison Flood: Historians Tom Holland, Mary Fulbrook, Serhii Plokhy and Daniel Beer discuss the people from the past who were guilty of complicity

Making foes out of friends by Steven Borowiec: North Korea’s grave human rights record is off the negotiation table in talks with South Korea. Why?

Nothing in life is free by Mark Frary: An investigation into how much information and privacy we are giving away on our phones

Not my turf by Jemimah Steinfeld: Helen Lewis argues that vitriol around the trans debate means only extreme voices are being heard

Stripsearch by Martin Rowson: You’ve just signed away your freedom to dream in private

Driven towards the exit by Victoria Pavlova: As Bulgarian media is bought up by those with ties to the government, journalists are being forced out of the industry

Shadowing the golden age of Soviet censorship by Ak Welsapar: The Turkmen author discusses those who got in bed with the old regime, and what’s happening now

Silent majority by Stefano Pozzebon: A culture of fear has taken over Venezuela, where people are facing prison for being critical

Academically challenged by Kaya Genç: A Turkish academic who worried about publicly criticising the government hit a tipping point once her name was faked on a petition

Unhealthy market by Charlotte Middlehurst: As coronavirus affects China’s economy, will a weaker market mean international companies have more power to stand up for freedom of expression?

When silence is not enough by Julian Baggini: The philosopher ponders the dilemma of when you have to speak out and when it is OK not to

Generations apart by Kaya Genç and Karoline Kan: We sat down with Turkish and Chinese families to hear whether things really are that different between the generations when it comes to free speech

Crossing the line by Stephen Woodman: Cartels trading in cocaine are taking violent action to stop journalists reporting on them

A slap in the face by Alessio Perrone: Meet the Italian journalist who has had to fight over 126 lawsuits all aimed at silencing her

Con (census) by Jessica Ní Mhainín: Turns out national censuses are controversial, especially in the countries where information is most tightly controlled

The documentary Bolsonaro doesn’t want made by Rachael Jolley: Brazil’s president has pulled the plug on funding for the TV series Transversais. Why? We speak to the director and publish extracts from its pitch

Up in smoke by Félix Bruzzone: A semi-autobiographical story from the son of two of Argentina’s disappeared

Between the gavel and the anvil by Najwa Bin Shatwan: A new short story about a Libyan author who starts changing her story to please neighbours

We could all disappear by Neamat Imam: The Bangladesh novelist on why his next book is about a famous writer who disappeared in the 1970s

Index around the world

Demand points of view by Orna Herr: A new Index initiative has allowed people to debate about all of the issues we’re otherwise avoiding

Ticking the boxes by Jemimah Steinfeld: Voter turnout has never felt more important and has led to many new organisations setting out to encourage this. But they face many obstacles

The playwright Arthur Miller wrote an essay for Index in 1978 entitled The Sin of Power. We reproduce it for the first time on our website and theatre director Nicholas Hytner responds to it in the magazine

In the Index on Censorship autumn 2019 podcast, we focus on how travel restrictions at borders are limiting the flow of free thought and ideas. Lewis Jennings and Sally Gimson talk to trans woman and activist Peppermint; San Diego photojournalist Ariana Drehsler and Index’s South Korean correspondent Steven Borowiec