NEWS
Attacks on media in Europe must not become a new normal, report says

Attacks on press freedom in Europe are at serious risk of becoming a new normal, 14 international press freedom groups and journalists’ organisations including Index on Censorship warn today as they launch the 2020 annual report of the Council of Europe Platform to Promote the Protection of Journalism and the Safety of Journalists. The fresh assault on media freedom amid the Covid-19 pandemic has worsened an already gloomy outlook. 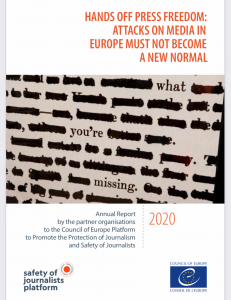 The report analyses alerts submitted to the platform in 2019 and shows a growing pattern of intimidation to silence journalists in Europe. The past weeks have accelerated this trend, with the pandemic producing a new wave of serious threats and attacks on press freedom in several Council of Europe member states. In response to the health crisis, governments have detained journalists for critical reporting, vastly expanded surveillance and passed new laws to punish “fake news” even as they decide themselves what is allowable and what is false without the oversight of appropriate independent bodies.

These threats risk a tipping point in the fight to preserve a free media in Europe. They underscore the report’s urgent wake-up call on Council of Europe member states to act quickly and resolutely to end the assault against press freedom, so that journalists and other media actors can report without fear.

Although the overall response rate by member states to the platform rose slightly to 60 % in 2019, Russia, Turkey, and Azerbaijan – three of the biggest media freedom violators – continue to ignore alerts, together with Bosnia and Herzegovina.

2019 was already an intense and often dangerous battleground for press freedom and freedom of expression in Europe. The platform recorded 142 serious threats to media freedom, including 33 physical attacks against journalists, 17 new cases of detention and imprisonment and 43 cases of harassment and intimidation. 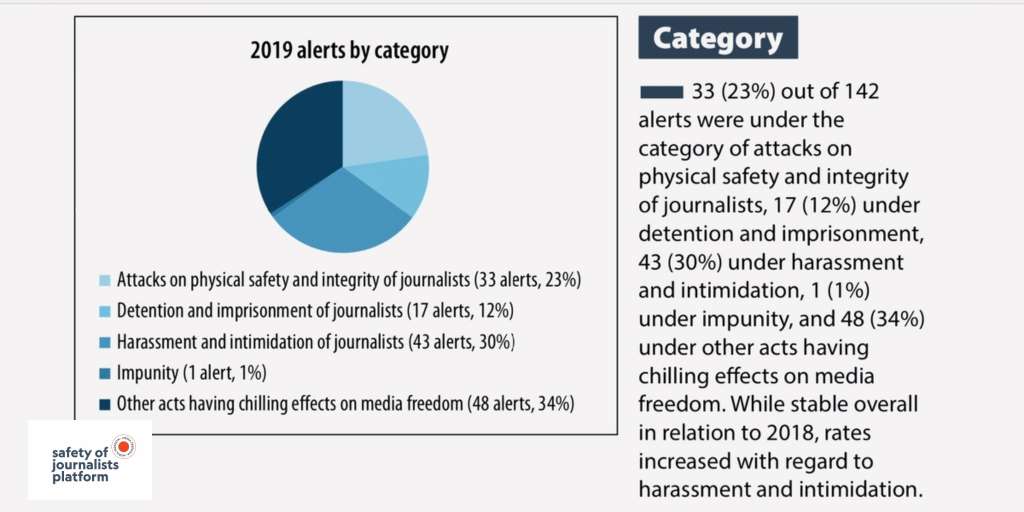 The physical attacks tragically included two killings of journalists: Lyra McKee in Northern Ireland and Vadym Komarov in Ukraine. Meanwhile, the platform officially declared the murders of Daphne Caruana Galizia (2017) in Malta and Martin O’Hagan (2001) in Northern Ireland as impunity cases, highlighting authorities’ failure to bring those responsible to justice. Only Slovakia showed concrete progress in the fight against impunity, indicting the alleged mastermind and four others accused of murdering journalist Ján Kuciak and his fiancée, Martina Kušnírová.

At the end of 2019, the platform recorded 105 cases of journalists behind bars in the Council of Europe region, including 91 in Turkey alone. The situation has not improved in 2020. Despite the acute health threat, Turkey excluded journalists from a mass release of inmates in April 2020, and second-biggest jailer Azerbaijan has made new arrests over critical coverage of the country’s coronavirus response.

2019 saw a clear increase in judicial or administrative harassment against journalists, including meritless SLAPP cases, and spurious and politically motivated legal threats. Prominent examples were the false drug charges filed against Russian investigative journalist Ivan Golunov and the continued imprisonment of journalists in Ukraine’s Russia-controlled Crimea. The Covid-19 crisis has strengthened officials’ tools to harass journalists, with dangerous new “fake news” laws in countries such as Hungary and Russia that threaten journalists with jail for contravening the official line.

Other serious issues identified by 2019 alerts included expanded surveillance measures threatening journalists’ ability to protect their sources, including in France, Poland and Switzerland, as well political attempts to “capture” media through ownership and market manipulation, most conspicuously of all in Hungary. These threats, too, are exacerbated by the actions taken by several governments under the health crisis, which further include arbitrary limitations on independent reporting and on journalists’ access to official information about the pandemic.

Jessica Ní Mhainín, Index’s policy research and advocacy officer, says, “There is a growing pattern of intimidation aimed at silencing journalists in Europe. The situation in Eastern Europe – especially in Hungary, Poland, and Bulgaria – is particularly concerning. But the killing of Lyra McKee shows that we cannot take the safety of journalists for granted anywhere – not even in countries that are seen to be safe for journalists. This report provides an opportunity for us all to come to grips with the serious situation that is facing European media and to remind ourselves of the vital role that the media play in holding power to account.”

Index and the other platform partners call for urgent scrutiny of action taken by governments to claim extraordinary powers related to freedom of expression and media freedom under emergency legislation that are not strictly necessary and proportionate in response to the pandemic. Uncontrolled and unlimited state of emergency laws are open to abuse and have already had a severe chilling effect on the ability of the media to report and scrutinise the actions of state authorities.

While the platform welcomes an increased focus on press freedom by European institutions,  including both the Council of Europe and European Union institutions, the ongoing crisis demands more urgent and stringent responses to protect media freedom and freedom of expression and information, and to support the financial sustainability of independent professional journalism. In the age of emergency rule, protecting the press as the watchdog of democracy cannot wait.