The Covid-19 pandemic has been largely contained in Hong Kong, with only about a dozen community cases over the past two months and all imported cases detected and isolated upon arrival. I was beginning to allow myself to feel less depressed about the situation in the city, even though I continued to worry about how coronavirus was affecting the rest of the world. And then, in late May, Beijing announced the National Security Law for Hong Kong, bypassing the city’s Basic Law and Legislative Council.

The law came out of nowhere, with the stated targets of so-called secession, terrorism, subversion, and collusion with foreign governments. When did they start planning it? Who was involved in drafting it? How is it going to be implemented? It was a devastating day in Hong Kong when the news was released, and I am certain many were plunged into yet another emotional and psychological abyss. I myself felt angry, helpless and wistful for ‘simpler’ days when the news wouldn’t break your heart or make your blood boil on a daily basis.

If last year’s extradition bill, which was withdrawn in September after mass protests, didn’t drive people away, the national security law has already sufficiently frightened many to make plans to leave. Whatever confidence they might have had in the city’s democratic future has been crushed. Like a skull being smashed against the wall by the Chinese Communist Party. The opacity of the law, combined with the severe sentencing—the city’s sole delegate to the National People’s Congress Standing Committee Tam Yiu-chung has even suggested life sentences for some infractions—are making people relocate. Those who have no means to leave are like silent lambs under knives that can fall at any time.

The National Security Law is particularly chilling for the following reasons: the speed of its introduction; the top-down approach, which has completely disregarded the opinions of people here; the way it has been cloaked in secrecy for spurious reasons – not even Hong Kong’s puppet chief executive Carrie Lam has seen the text, and nobody will until it is passed. The lack of means for Hongkongers to express their views and push back—and the inevitability of the law being passed (although I have to admit I still harbour some naïve belief that some miracle might happen and reverse the situation). Most worryingly, there is the way a similar law has been used in mainland China to attack dissidents, including democracy advocates such as the late Nobel peace laureate Liu Xiaobo and human rights lawyers such as Wang Quanzhang, not to mention academics and labour activists who are not household names. I fear we only have the worst case scenarios to look forward to.

What we are witnessing is the rapid evisceration of “One Country, Two Systems”, the principle by which Hong Kong has been governed since the 1997 handover. By removing the legal firewall between the mainland and Hong Kong, Beijing is reneging on its pledges in the 1984 Sino-British Declaration. While Hongkongers have long come to distrust the Chinese government, this is the final betrayal, after their concerns voiced repeatedly in popular protests, and elections in 2016 and 2019, have been dismissed.

This also has implications for a world that is turning increasingly authoritarian. And China, with its overseas initiatives such as Belt and Road, is pulling other countries further into its ambit and dependency on it. The Chinese government does not hesitate to interfere in other countries, demanding publishers and organisers of events withdraw items that displease it, such as a recent photography exhibition in Belfast, where the Chinese consulate requested a photograph of the Tiananmen “Tank man” be removed (the request went unanswered). As China’s economic heft in other countries increases, such demands and interference will only become more common.

History has shown how precipitous change for the worse can be. Countries in the West and elsewhere have long accommodated China out of economic pragmatism; only now are many of them waking up to the dangers of appeasement. The Chinese Communist Party has no intention of yielding any power, either at home or abroad, and what it has done in Hong Kong with the National Security Law should be a wake-up call for countries everywhere. 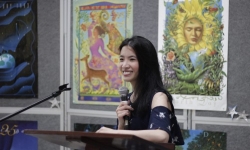 Tammy Lai-Ming Ho
Tammy Lai-Ming Ho is a writer, translator and editor. She teaches at Hong Kong Baptist University. She is also the president of PEN Hong Kong. Her poetry and writings have been widely published, including in Index on Censorship magazine

One response to “A personal letter from Hong Kong”