NEWS
New report on protecting the media against Slapps

What measures can be introduced to protect journalists facing vexatious legal actions? 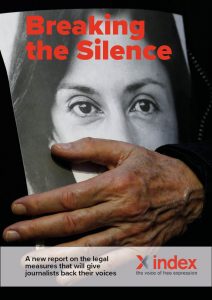 Index on Censorship has launched its second report, Breaking the Silence, as part of its ongoing research into a type of vexatious legal action known as a Slapp – strategic lawsuit against public participation. The research focuses on the extent to which journalists and media outlets in Europe are being affected by Slapps, and on what can be done to protect them.

Breaking the Silence outlines a series of concerns raised by media lawyers during a roundtable hosted by Index on Censorship in July, and puts forward six measures that would help prevent Slapps from having an impact. One of the most extensive measures is the introduction of anti-Slapps legislation. “Free speech is vastly protected by the anti-Slapp statute – it’s a night and day difference,” United States-based lawyer, Thomas R. Burke, told the roundtable participants as he outlined the legislation that was enacted in California in 1992.

“We are indebted to the lawyers and legal experts who shared their time and insights with us,” said senior policy research and advocacy officer, Jessica Ní Mhainín, who authored the report. “We hope that policymakers will pay heed to the serious threat that Slapps are posing to freedom of expression, rule of law, and democracy, and consider the measures that are proposed in this report.”