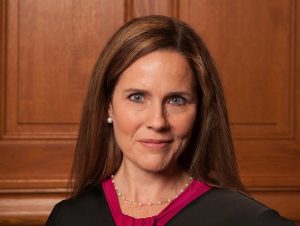 As Amy Coney Barrett’s nomination to the Supreme Court advances to the Senate – despite a boycott from Democrats – it is still unclear where she stands on free speech.

Coney Barrett did little to allay fears over her positions on key constitutional issues during her confirmation hearings for the vacant seat on the US Supreme Court.

Members of the Senate Judiciary Committee questioned the judge on issues including free speech and the First Amendment.

When asked by Republican Senator Ben Sasse what the freedoms protected by the amendment are, Coney Barrett was unable to recall the latter.

The freedom of redress gives citizens of the USA the right to petition or complain to government authorities at the federal, state and local level without fear of reprisals or punishment. It is a vital part of the constitution and very much a contemporary issue.

There has been extra scrutiny on issues around the First Amendment ever since the protests against the killing of George Floyd broke out in May this year.

With the typical rigour of judicial committee hearings, Coney Barrett could be forgiven for what was likely an innocent slip-up. However, the response will have done little to calm the nervousness over her appointment from free speech campaigners and members of the press.

The judge, 48, does not have an extensive record on dealing with with issues of First Amendment freedoms and her position on them has therefore been difficult to interpret.

On whistleblower cases, for example, Coney Barrett has joined different sides of the debate in different cases.

In August this year, Coney Barrett’s court favoured the First Amendment and the right of a public employee to raise alarm. However, in the case of Kelvin Lett, a Chicago investigator who refused to change a police report under direction from his supervisor, Coney Barrett ruled: “Lett may have had a good reason to refuse to amend the report [but this] does not grant him a First Amendment cause of action.”

On other issues, Coney Barrett was repeatedly accused of being “evasive” during the hearings, particularly on more controversial matters; the Democrats have repeatedly alluded to her Catholic faith as a potential problem.

However even before her nomination, she has expressed her belief in the importance of the separation of church and state.

“I think one of the most important responsibilities of a judge is to put their personal preferences and beliefs aside. Our responsibility is to adhere to the rule of law,” she said.

The Trump administration has faced repeated criticism from free speech groups since taking office in 2016. Among the criticisms are the crackdown on Black Lives Matter protests across the country, as well his repeated attacks on press freedoms.

Index, along with other free speech organisations have raised concerns over harms to media freedom in the country and in particular since the outbreak of the coronavirus pandemic.

The US Press Freedom Tracker has logged 219 journalists attacked, 62 equipment damages, 71 journalists arrested and over 10 occasions where equipment was searched or seized in this year alone.

As Trump’s Supreme Court nominee, these issues naturally fell on Coney Barrett to talk at length on during the hearings, but she gave little insight into her stance on media freedom.

Coney Barrett’s addition would give the Supreme Court a 6-3 conservative majority, heightening concern over the consequences of Trump’s potential election victory and the impact on policy should Joe Biden win instead.