NEWS
The bloody consequences of Turkey's clashes with the Kurds

In September, two men were abducted, beaten and thrown from a helicopter. One died, the other hospitalised. Journalists reporting the story have been targeted too

On 11 September, the peaceful silence of the early morning in Sürik, a tiny, unassuming village located in the barren yet beautiful mountains of Van, an eastern and mostly Kurdish populated province in Turkey, was broken by the sound of a violent explosion. The blast was so powerful that the earth shook; the adobe houses of the village rattled.

The Turkish military had been conducting operations in the region since early September, and clashes between soldiers and militants of the Kurdistan Workers’ Party (PKK), an armed group  which has been fighting for Kurdish independence for more than four decades, had been more frequent than usual. The villagers saw military helicopters circling the usually serene skies above Çatak.

By the time the sun had melted the previous night’s fragile frost, one of the choppers had landed in an area behind the village. They took off a while later, taking two of the villagers with them.

The two men, Osman Şiban, 50, and Server Turgut, 63, reappeared two days later, in the ward of a military hospital in Van. While these are nowhere near rare occurrences in the Turkish southeast, the country would have never heard about the horrific torture the two men went through if it wasn’t for a news report published on the day of their reappearance by Cemil Uğur, a Van-based journalist with the Mezopotamya News Agency (MA). The report claimed they were beaten and pushed off a helicopter.

The Van governor’s office denied the allegations of torture, saying the two villagers, captured as part of an operation in the region named Yıldırım-10 Norduz (after an indigenous mountain goat), ignored commands to stop.

In the following days, other reporters—Adnan Bilen, the Van bureau chief of MA, Şehriban Abi from the feminist Kurdish news agency JinNews and freelancer Nazan Sala—all known for reporting on human rights violations in Turkey’s Kurdish regions, followed the story, filling in the details, talking to the families and witnesses, gathering documents from forensic invesetigations and prosecutors.

An interview with Siban from his hospital bed by Uğur on 17 September featured a photo of Şiban, whose bloody eyes (top) left little to the imagination about the horrors the two men must have had undergone, whom the journalist talked with in his hospital bed.

On 30 September, Turgut died after days in intensive care.

Less than a week after Turgut’s death, the homes of the journalists reporting on the case were raided and, a few days later, they were arrested on charges of “membership of a terrorist organisation”.

Journalists punished for reporting the news

More details of the unspeakable torture the two men had gone through came out on 2 November, when independent lawmaker Ahmet Şik, who travelled to the region in late October, revealed the details of his investigation at a press conference in parliament.

The two men were beaten on the chopper, later, pushed off — presumably after it landed – and then beaten to near-death by 150 gendarmerie soldiers in scenes in a “state-sanctioned lynching.”

Şık’s report also detailed other ways in which the state attempted to cover up the torture of the two villagers in addition to arresting the people who reported on the case. He later told the Media and Law Studies Association (MLSA),whose lawyers represent three of the imprisoned Van reporters, that the journalists, who the authorities assert were detained on the basis of an investigation launched prior to the Van incident, were clearly being punished for their reporting on the ordeal of the two villagers.

A ‘grave danger’ for all journalists

Lawyer Veysel Ok, co-director of the MLSA, notes that this punishment for reporting the news has the power to have serious repercussions for other journalists in Turkey, where 86 journalists are in prison.

He points to several alarming developments regarding the investigation into the journalists, saying, “In the journalists’ arrest order, the court accused these journalists of ‘reporting on social incidents against the state but in favour of the terrorist organisation PKK/KCK’ in order to incite agitation, and ‘making news in a continuous way, with variety and in high numbers.’”

To highlight the gravity of the possible consequences, “these journalists are all Kurdish and have been working in the region, and specifically in Van, for a very long time.”

“Their reporting has always shed light on human rights violations against Kurdish citizens in the region,” Ok said.

The arrest warrant also accuses the journalists of “criticising and harming the reputation of the anti-terrorism effort of the Republic of Turkey”. Another accusation is “identifying oneself as a journalist and making news reports for a fee without being a press card holder”.

“So the court is arguing that the four reporters are not ‘real’ journalists on the grounds that they don’t have an official press card issued by the president’s office,” Ok said. “There is not a single line in the Turkish legislation that stipulates that one needs a press card to be a journalist. Press card accreditation is necessary only for following government officials’ activities and the practice has been, as of late, to only issue them to those journalists who work for the pro-government media, so this press card mention in the warrant can have far-reaching consequences for any journalist in Turkey.”

The justifications put forth by the court are “unacceptable,” the lawyer added.

“The judiciary aims to create a chilling effect on all journalists, like the Sword of Damocles,” he said. “That’s why we find this case extremely important, care about it deeply and demand solidarity from fellow journalists, and everyone who cares about freedom of speech and not just in Turkey but all around the world.”

Ok also noted another worrying problem about the case; that the prosecutor who is conducting the investigation against the Van journalists is the same one that conducts the investigation on the lynching of the two villagers.

“The arrest decision is a very alarming one for journalism,” he said. “This is why our organisation has taken on this case. We will take this unlawful arrest first to the Constitutional Court and then to the European Court of Human Rights (ECtHR).”

Ok said he was in Van on 27 October where he visited the four journalists in prison and noted that although they seem to be in good spirits, they also demand solidarity and support from the outside world against the injustice they are suffering for doing their jobs.

“Van is a far-off city, in the easternmost part of the country,” Ok said. “It is important that this case is not forgotten because it is not in Istanbul. These journalists have written news reports that should win an award. We will be in Van at the time of the first hearing to support these journalists and their journalism. They deserve the support of their colleagues and rights groups everywhere for bringing out the truth.” 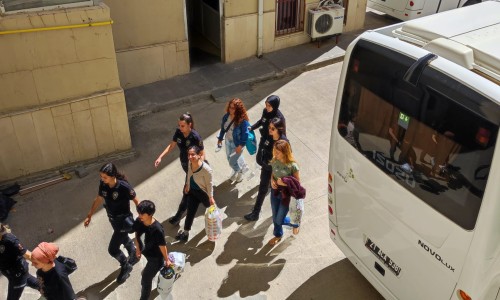