NEWS
Ten years on: Celebrating the legacy of Tim Hetherington 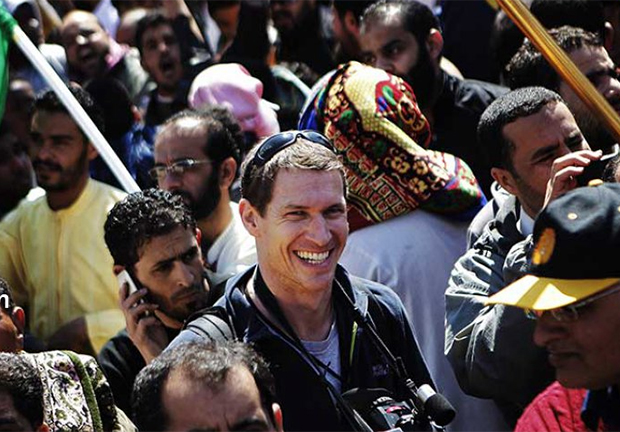 Tim Hetherington’s mission to create a better understanding of the world cast him in many roles: photojournalist, filmmaker, human rights advocate, artist and a leading thinker in media innovation. He was killed in Libya by a mortar in in April 2011.

On 20 April 2011, photojournalist Tim Hetherington was killed by shrapnel from a mortar blast in Misrata, Libya.

Born in Liverpool on 5 December 1970, Hetherington was a prominent photojournalist whose work was acclaimed by his peers. He was once described as one of ‘brightest photojournalists of his generation’ and his work included co-producing the Oscar-nominated Restrepo, a 2010 documentary film about US soldiers in the war in Afghanistan.

His passion for his work was rooted in developing a relationship between his audience and the events portrayed in his work. He once said: “I want to record world events, big history told in the form of a small history, the personal perspective that gives my life meaning and significance. My work is all about building bridges between myself and the audience.”

A clear passion for people is what led him to the Libyan civil war and to the front line between rebel forces and those of Muammar Gaddafi, where he met his death.

After a degree in photojournalism from Cardiff University in 1997, Hetherington pursued his photography career. His coverage was extensive and ranged from the aftermath of the 2004 Boxing Day tsunami, to the events during and after the Liberian civil war.

Director of the Tim Hetherington Trust, Stephen Mayes, shed a light on where his appetite for his work came from. He wrote: “His family talks about a child who was playful yet intense, perpetually curious and seeking new experiences, pushing the proper boundaries of an English adolescence, characteristics that later served him well as a journalist.”

“It was never enough to simply witness events, he had to experience the lives of his subjects”

After Hetherington’s death, Sebastian Jungar, the director of Restrepo and someone who worked closely with him released the film “Where is the Front Line from Here? The Life and Time of Tim Hetherington”, a documentary about his life and work.

Junger told Index of his work with Hetherington and his unique way of thinking.

“In my mind he was some ways a brother. We were in combat together and it builds a kind of experience of brotherhood that is hard to find anywhere else,” Junger recollected.

“When he was killed, I was devastated like I had never been devastated by anything. Among other things, I decided to stop combat reporting.”

“He really thought out of the box. He said to me ‘I only use a camera because that is the easiest way to tell a certain kind of story. If I could tell that story without a camera I would drop it in a second’.”

During the filming of the pair’s co-project, Restrepo, Junger recalls a moment that typified Hetherington’s approach to his work.

“There was a lot of combat, but when there wasn’t, the guys [US infantry] would basically sleep as much as they could.”

“One day everyone was asleep, but Tim was sort of creeping around and I asked him ‘What are you doing? It is like 100 degrees and everyone is asleep’.”

“He said ‘Don’t you get it? They look like children. This is how their mothers see them’.”

Tim Hetherington’s name lives on not only through his work but also through an eponymous fellowship with Index on Censorship, established in 2016 in conjunction with Liverpool John Moores University and the Tim Hetherington Trust. The fellowship sees a student from the university join Index for a year as editorial assistant on the magazine and website, gaining valuable journalistic experience.

Steve Harrison, journalism lecturer at LJMU’s Liverpool Screen School, who manages the fellowship, spoke of the how Hetherington’s work continues to be a good example to his students.

“His main media output was documentaries, so it is of particular interest to people looking to go into that. But it was his journalism roots that is relevant to all students and an example of a way in which journalism can be put to a very powerful use,” he said.

“It is not just journalism, it is art as well, the intersection of journalism and art. It is our view that Tim’s work was an inspiration for current and future journalists and one of the main reasons we thought naming [the fellowship] after him was so appropriate. An ideal fit.”

The fellowship has helped a number of former LJMU students gain a foothold in the industry. Last year’s recipient Orna Herr, now a communications officer for the British Science Association, said: “The Tim Hetherington fellowship gave me incomparable experience of working in journalism and the confidence to pitch and write my own stories. Being a member of the team at Index allowed me to be part of the process of editing and publishing articles from all over the world, working closely with the journalists themselves and the editorial team.

“I left Index with a portfolio of work I’m very proud of.”

Lewis Jennings, the 2018/19 fellow, said, “I learned a lot about the craft of journalism and also what it means to be an advocate for free expression. It opened my eyes to a lot of things that go on in the world in terms of threats to the media and free speech. It has enabled me to pursue a career in journalism, both in print and radio. It was an honour to carry on the legacy of Tim Hetherington through the fellowship. Tim’s work as a visual storyteller and human rights advocate continues to inspire ten years after his death.”