London, UK – A coalition of experts including David Davis MP, Index on Censorship chief executive Ruth Smeeth, and Gavin Millar QC savaged the government’s proposed Online Safety Bill today, branding it “catastrophic” for freedom of speech as they launched the ‘Legal to Say. Legal to Type.’ campaign to scrutinise and push back against the bill.

The emergency session was called by the group of leading experts to warn the public that the bill will create two tiers of free speech online: free speech for journalists and politicians, and censorship for ordinary citizens. 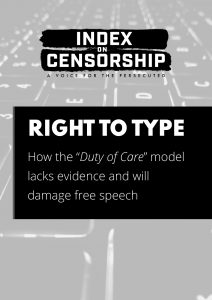 A new report from Index On Censorship launched at the conference warns that the bill’s introduction of the “Duty of Care model” which comes from Health and Safety legislation is overly simplistic. The new rule would force tech platforms to delete posts that are legal under laws passed by Parliament but considered “harmful”. The bill does not define what is and is not “harmful”, the group says this will result in many perfectly legal posts from ordinary people being banned online. The bill effectively outsources internet policing from the police, courts and Parliament to Silicon Valley.

Legal expert Gavin Millar QC deems the Duty of Care framework will enable vast amounts of speech online to be deleted – and suggests it will likely be challenged in the courts.

While the bill’s aim of ensuring platforms remove illegal images of child sexual abuse, terrorist material and content which incites racial hatred and violence from screens is welcomed by the group, its members today criticised the government’s bill for actually making it harder for law enforcement to properly hold online abusers accountable. The bill forces platforms to delete valuable evidence before the victims of targeted harassment or threats to kill can see the criminal content and ensure it is reported to the police.

In its current form, the legislation protects trolls, making them feel safer to abuse online because the platforms are punished for hosting the harmful content as opposed to the people who create it. Members of the coalition are demanding the government puts criminals behind bars rather than simply deleting their posts. The group also raises concerns about the bill potentially resulting in an increase in popularity of the ‘dark web’, which the Online Safety Bill does not cover.

The Index on Censorship report criticises the role of Ofcom as the final adjudicator as highly problematic and could lead to the over-censorship of free speech by the Silicon Valley giants as they attempt to avoid huge fines. As the report notes, since the abolition of press licensing in 1695, people in England have been free to publish ideas without direct government interference. By turning Ofcom into a “super regulator” of free speech, the government is imposing a state regulator over the written word for the first time in over 300 years. In place of a formal court process to deal with potentially illegal publication, instead Ofcom will be given new powers in the Online Safety Bill to fine technology companies for allowing content to be posted that is perfectly legal, but thought to be “harmful” by Ofcom. The definition of “harmful” is open to interpretation and the group is concerned this could be used to regulate ideas that people in the UK should be free to express. The fines that Ofcom will be able to levy will be eye-watering, with the potential fines as high as 10% of turnover. The report by Index on Censorship notes there will be a commercial incentive to over-censor, to remove content once deemed as perfectly acceptable, as to defend free speech online could cause significant financial risk.

The group have expressed fears that black and ethnic minority Britons will be censored by Artificial Intelligence that doesn’t understand the nuances of human language – especially when it comes to irony loving Brits. For example a 2019 study by Washington University found that tweets from African-American users were two times more likely to be labeled as offensive than tweets from other users.

“The Government’s bill is catastrophic for freedom of speech. It’s plan to force tech platforms to delete “harmful” content or face big fines will lead to many legal posts being deleted. At Index on Censorship we work with people across the globe who are being censored by oppressive regimes. It might not be the UK Government’s intention but this bill sets a worrying international precedent. Dictators around the world will be taking notes. Also as someone who has experienced online abuse, I am dismayed that the bill would force platforms to delete offending comments. These comments are vital evidence for law enforcement and will make it harder for the authorities to catch people who actually break the law online.”

“The Online Safety Bill is a Censor’s Charter. Lobby groups will be able to push social networks to take down content they view as not politically correct, even though the content is legal. The idea we should force Silicon Valley companies to police Briton’s speech online, seems out of Orwell’s 1984, and is not what our voters expect of us.”

“The bill proposed by the government is likely to lead to perfectly legal speech being removed from the internet and it seems inevitable that this will be challenged in the courts.

The scale of the task given to platforms, and the vagueness of wording in the legislation will force broad “technical” solutions to content moderation – such as overly restrictive algorithms which will make decisions without context, nuance and an understanding of our laws and culture. This could lead to large quantities of content being blocked wrongly.

Judgments that should be reserved for UK prosecutors and the courts will be outsourced to global tech companies.

As someone who has undertaken many free speech missions for international organisations to countries with repressive free speech regimes such as China, Turkey, Azerbaijan there is a real risk that this legislation, if passed, will be used to justify repressive measures aimed at closing down free speech on the internet in these countries.”

“Outsourcing decision making around free speech to Silicon Valley and taking away this responsibility from the UK’s Parliament and Courts would be a huge mistake. The threat of colossal fines or even jail time for Directors will cause tech platforms to overreact, prompting them to remove content that is perfectly legal. Worse still, politicians and journalists are opted out of the law, creating an unhealthy two-tier system online.”

About ‘Legal to Say. Legal to Type.’

The ‘Legal to Say. Legal to Type.’ campaign is calling on the government to table amendments and ensure the internet is kept “free, open and secure”. The assembly consists of notable experts including: