NEWS
"Spies were being sent to look for me"

When our correspondent in Africa reported on the crackdown on media freedom in the DRC he was told he was going to be taken by authorities. That led to him fleeing. Here's his story

Since returning home to the Democratic Republic of Congo in the winter of 2020, after spending several years travelling throughout Africa, I found the winds of change blowing over the country. Expectations were high that these winds would bring new freedoms, including freedom of expression and the media, which had been overlooked under the old administration.

But it was not to be. I quickly found that yesterday’s victims – the current ruling party leaders – had turned into the new oppressors. Journalists and thought leaders, even musicians, were arrested, threatened, taken to court and jailed. Others would self-censor to avoid trouble. They did not want to get in trouble with the authorities. The new leader of the DRC, Felix Tshisekedi, failed in his promise to protect the media, just like previous leaders had.

DRC leader Felix Tshisekedi, who has presided over a crackdown on the press. Credit: www.kremlin.ru/Wikimedia

Many would decry the way I reported, saying that I was putting myself in danger. But I was trained in South Africa, where the media is more free. I didn’t want to self-censor. So when Index on Censorship asked me to write about Tshisekedi’s failed promises to put the media first, I accepted.

I did not realise then quite how much it would put me in danger. A few weeks after filing, I was told that those in power were angered by my article and that spies were being sent to look for me. I also heard allegations that a list of anti-regime journalists had been issued by ruling party supporters – each person to be hunted down. Apparently, my name was on that list.

The weeks that followed were a sort of hell. I slept uneasily, fearing for my life. My wife and I were separated – pending a divorce – and on a level that felt like a blessing. At least I knew she and our children would be safe, away from me. If a hitman came to finish me off, I would die alone, and spare the lives of our kids.

I wanted to leave the capital city, my birthplace, but I did not know where to go. At the time I was staying in a hotel due to the breakup of my marriage. I quickly packed a suitcase with my clothes. While I wasn’t sure exactly when or if someone would come for me, I couldn’t take the risk. I left in haste. I didn’t even have time to pick up my trousers and shirt that were being repaired at a makeshift dressmaker.

The money I had was very little. It would be hard to purchase a ticket to West Africa, a region that I love and that I believe is one of the world’s underreported zones. With the money that I did have, I travelled to the troubled east of the country. It wasn’t a decision made lightly. Rather from there it would be relatively easy to cross the border into other, safer countries.

In the DRC’s east many journalists have been killed and others threatened in recent years. The media work under duress. They face threats and attacks from security forces and intelligence agencies, and from armed groups. For example, in October 2020 a radio journalist went into hiding after army generals threatened to kill her.

While there I was told that I had to be very careful; two gunmen in army uniforms had come looking for a journalist near where I was staying. Once again, I started to make plans to leave, and this time round to leave the DRC for good. Again, I had very little money. Index fortunately gave me an advance on my next article, which really helped. It was time to go. Before it is too late.

I went first by ship, the whole night, 100.4 km to the south, then by car crisscrossing mountains, hills and valleys, another 100 km further south, all amid the presence of dozens of armed groups.

I finally made it safely out of the “danger zone”. I was out of reach, both from the government, its army, and militia.

But new challenges quickly emerged. On the way to where I was supposed to go to be able to seek refuge I was robbed. My laptop was taken and all my money. Those who robbed us said that if we ever tried to report the incident to the authorities they would hunt us down. Again, silenced and gagged.

Back to square one. Those days were a struggle. Minimal food and money, no laptop, no phone, no permanent place to stay. I felt hopeless and helpless in a strange country.

I worried about where I would sleep and eat and also about the stories I would struggle to report.

These beautiful and exciting lands have been transformed into a hostile zone run by political leaders who hate the media. I long for West Africa – “my second home”. I want to go there and be at peace and rest. Not to retire though, no, because I firmly believe that I was born to write, expose, criticise and hold the powerful to account.

This account was given to Index in January. Since then the writer has managed to leave the DRC and is reporting for Index in the upcoming 50th anniversary special issue. 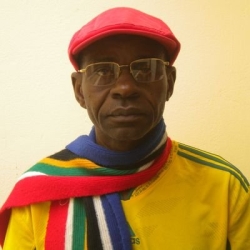