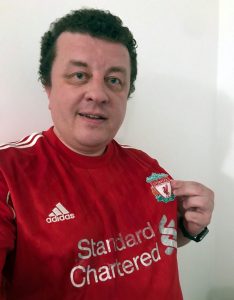 Andrei’s beloved Liverpool FC has won two trophies this season and will play UEFA Champions League final at the end of May. Has he been able to follow the Reds? We simply don’t know. Credit: Andrei Aliaksandrau

Belarus journalist and human rights defender Andrei Aliaksandrau marks 500 days behind bars in his native Belarus today. The 44-year-old spent several years working with Index on Censorship, as well as coordinating the Civic Solidarity Platform, a coalition of 60 human rights groups. He is a passionate Liverpool FC supporter. He is not only our former colleague, but also our friend.

Arrested along with his girlfriend Iryna Zlobina, another political prisoner of the brutal regime of Alexander Lukashenko, Andrei faces up to 15 years in prison if convicted. The accusation? “Treason to the State”. He was arrested after paying off fines given to journalists and protesters who took to the streets following the fraudulent 2020 presidential election, “won” by Lukashenko.

It’s hard to imagine how Andrei feels about his freedom being deprived in such a cruel and unfair way. How many major worldwide events since January 2021 has he been prevented from following more closely? The Taliban’s return to power in Afghanistan, the migration crisis on the border between Poland and Belarus and the Russian invasion of Ukraine. Surely Andrei would be taking a stand on these matters and collaborating in some way, but that basic right was ruthlessly taken from his hands.

Has Andrei been able to follow the news surrounding his beloved Liverpool FC? The Reds narrowly missed winning the Premier League in the last round of the 2021-2022 season. “You’ll Never Walk Alone,” was chanted in unison by everyone in the Anfield stadium after the match against Wolverhampton. Given the chance, Andrei would undoubtedly have joined in. On 28 May, Liverpool faces Real Madrid in Paris, in the final of the European Champions League. Most likely, televisions in prison (if there are any) will not show the match, and our friend will not see the emotions of the game. Instead, he will have to follow it with his heart. But in fact, he might not even know that his team is playing such an important match.

Andrei was jailed just as the first Covid-19 vaccinations were becoming available. Has he even had his first jab, let alone the two or three that wider society has been offered? If not, his health is at risk in addition to his liberty.

Currently, there are more than 1,000 political prisoners in Belarus, as far as we know. As the days go by, our duty grows to do everything we can to help Andrei, Iryna and all of the others imprisoned merely for exercising their free expression. We must release them from this nightmare. There is an online petition that everyone can sign to demand Andrei and Iryna’s urgent and unconditional release. You can stand with us by signing your name alongside ours.