Gavin Millar QC has produced the first analysis of the implications of the Bill for the British media and journalism, the courts and the UK’s digital economy 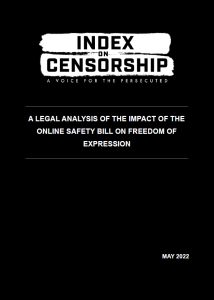 The Online Safety Bill has simple, laudable aims – to make the online sphere more safe. But despite almost seven years of debate, thousands of hours of Parliamentary scrutiny, analysis from civil society, business and the media, there is still significant uncertainty about how the Bill will work in practice. The Government is still not able to define terms at the heart of the legislation such as “legal but harmful” or give the as many as 180,000 technology companies big and small who will implement this new legal framework clear guidance on how this landmark legislation should operate.

To fill this gap and help explain what the Bill will mean in practice, the Legal to Say Legal to Type campaign has instructed media law expert Gavin Millar QC of Matrix Chambers to produce the first analysis of the implications of the Online Safety Bill on UK citizens’ freedom of speech.

The Bill, which received a second reading in Parliament on 19 April, does not comply with Article 10 of the European Convention on Human Rights, and far from the claim of the Culture Secretary that the Bill will protect free speech it actively undermines existing legal protections in an unprecedented manner. This new analysis shows how the Online Safety Bill as currently drafted ends the historic principle in law that people can publish what they like, unless the state specifically and clearly passes laws to the contrary.

This report is not a comprehensive dissection of the flaws in the Bill which are too vast to deal with succinctly. For example, the UK Independent Reviewer of Terrorism Legislation, Jonathan Hall QC has recently publicly criticised the Bill as being “ineffective on terrorism”. The chief criticism he lays is that “the Bill defines ‘terrorism content’ by reference to terrorism legislation, but ignores intention and defences. This leads to some very odd outcomes. It’s hard to see how it provides a workable framework for regulation.”

The ambiguity of the drafting and the lack of governmental consideration on the Bill’s intersection with existing linked areas of law is indeed staggering. The idea that speech can be lawfully moderated without properly adjudicating on an individual’s intention and the context of the speech is nonsensical – irrespective of whether your concern is terrorism, crime or freedom of expression.

Index on Censorship believes that the consequences of the Bill (intended and unintended) go beyond what has been considered in Parliament to date, for example:

The Government has ended up in this position having disregarded all the learnings from regulation of the online space over the last twenty years, including some of the fundamental building blocks of the internet namely intermediate liability protections. This is despite pre-legislative scrutiny identifying flaws in the draft Bill.

In summary, the legal advice, published in full in this report, found:

The report is available to read in full below or to download here.