NEWS
Detained, cuffed and thrown in a cell for seven hours: reporting protest in the UK in 2022

There is no substitute for witnessing events firsthand and telling your readers about them. Reporting is simple like this. When asked by a contact if I wanted to cover a Just Stop Oil protest in West London this August I set my alarm.

JSO’s progenitor Insulate Britain inflicted misery on ordinary Londoners (our readers) in a month of direct action in September 2021. They blocked traffic by sitting down at junctions around the M25 to protest new fossil fuels. By 2022, it was blindingly obvious this invite was a chance to get up close to a protest group which had proved divisive across the country. Some think these more radical actions are justified while others worry they repel popular support for climate change activism.

Really it doesn’t matter what anyone thinks about Just Stop Oil’s tactics or the UK Government’s response to climate change, my job is to report who, what, where, when and why things are happening on my patch and let our readers decide. I can’t do this properly by relying on press officers.

At 6:30am on 26 August I arrived at Talgarth Road BP garage in Hammersmith with my laptop, portable charger, a pocket full of pens and a notebook.

I was late. Armed with special hammers used to break glass in an emergency, the protesters were already battering the pumps and spraying them with paint. I grabbed my phone, filmed it, and then sent it to our newsroom. They published it and started a live blog. I then began interviewing protesters, some of whom were already handcuffed, to ask why they were doing this. I planned to speak to the drivers and garage staff too.

I’m 24 and I’ve only been reporting for a year, but I’ve spent some time with the Metropolitan Police. I’ve joined the force for a ride along to see what frontline policing looks like and I’ve had polite exchanges at crime scenes. I’ve also had a couple of disagreements. I’d had one tiff about photographing a building which had exploded in East London earlier that month. It ended with me reading the College of Policing Guidelines on media relations to the officer from my phone. I was also once told I couldn’t take photos of a car that was parked outside a murder scene. After some back and forth, the officer wrapped the car in tape. I’m still not sure what this achieved.

Maybe it was these experiences, or my inexperience, but I wasn’t that surprised when – doing my job – I was singled out and detained, then arrested. I’ve been reliably informed since this isn’t normal. 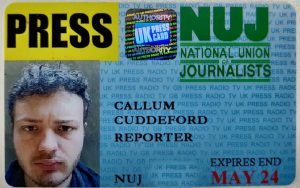 Callum Cuddeford’s press card did not stop his arrest

Hands cuffed at the front, pen in mouth, I asked the officer to look at my press card which he let me produce from my pocket. This didn’t make any difference.

The officers said I was accused of criminal damage by staff at the garage (a case of mistaken identity), and that they had to arrest me. My first thought was to shout at a nearby freelance photographer to make sure he got a good photo. I also tried to tell him to get a message to my editor. The officers shouted me down and said anything I said now could incriminate me. This was chilling, so I stayed quiet.

Though the arrests were made at different times, by different police forces, for different reasons, they all ended without a charge. Even if it is stupidity, mistaken identity or human error, it’s unsettling for freedom of expression and a waste of time for stretched emergency services.

I understand some officers are wondering why reporters and photographers know where the protests are happening, often before the police. The answer: Some get tip offs and others guess, but that doesn’t make us complicit. Suggesting so sets a dangerous precedent.

In all I was locked up for seven hours, which was uncomfortable, inconvenient and quite boring. But it was informative to feel helpless. I had the privilege of experiencing a police cell knowing I would probably be freed.

Still, the combination of a barren room, blasting light and constant thought-tennis led me into a moment of spiral. I questioned my own innocence.

The Police, Crime Sentencing and Courts Bill – opposed by senior police officers and three former Prime Ministers – was given royal assent in April. Human Rights group Liberty described the bill as “seriously worrying” and warned it will “hit those communities already affected by over-policing hardest”.

The new laws were designed to help police crackdown on disruption caused by Just Stop Oil, Insulate Britain and Extinction Rebellion, but on the face of it the new powers seems to have emboldened some police officers. Even if the police can produce a valid argument for each arrest, the result is still disturbing.

The alleged assault of a Daily Mirror reporter in Bristol in January 2021 and the arrest of a photographer at a demonstration in Kent in the same year shows over-policing isn’t new, but the consistency with which arrests have been made over the past few months feels like the natural result of a government shifting towards authoritarianism.

Police officers are under pressure in dangerous situations, but rights to film and photograph, report on civil disobedience and protect confidential sources are all fundamental to press freedom.

I can’t help but be sceptical about my arrest, especially in the context of this week’s triple nicking, but I still gave the officers the benefit of the doubt in a fast moving and potentially dangerous situation. Equally I can’t ignore the uncomfortable pattern emerging in which journalists should prepare themselves for a day in the cells if they want to cover a climate protest.

My release was expedited because I had a luminous yellow cycling bag on my back. When the police did finally check the CCTV (seven hours later) it was clear I wasn’t involved in the protest. I laughed about this with an officer as he handed me my things back, but it’s not a good solution.

Newsrooms and police forces need each other from crime scene to courtroom, witness appeals, giving victims of crime exposure, holding the police to account or indeed cracking down on illegal newsgathering.

You can bet it won’t put off a single reporter, but these arrests have already brought UK press freedom into question. 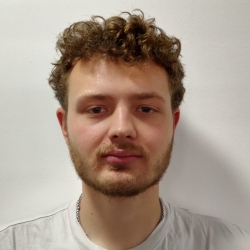 One response to “Detained, cuffed and thrown in a cell for seven hours: reporting protest in the UK in 2022”