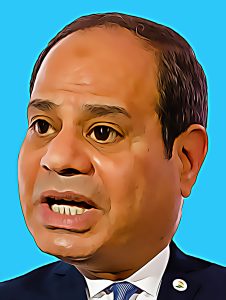 While world leaders met in Sharm el-Sheikh for COP27, British-Egyptian pro-democracy activist and writer Alaa Abd el-Fattah began a full hunger strike. He is imprisoned for “spreading false news” and has been denied access to diplomatic and legal counsel.

Sadly, Alaa’s case is far from unique. In fact, Human Rights First estimates that there are up to 65,000 political prisoners in detention in Egypt, though the real figure is unknown. Perplexingly, the Egyptian President Abdel Fatah el-Sisi has alleged that Egypt does not hold any political prisoners at all.

News that el-Sisi ordered the release of hundreds of prisoners in 2022  ahead of COP27 has been met with caution. “It might be tempting to think that positive change is on the horizon in Egypt following the releases of political prisoners.” says Index on Censorship’s Emma Sandvik Ling. “However, former political prisoners report continued intimidations and warnings of rearrest should they speak out against el-Sisi’s government. There is an important distinction to be made here between optics and genuine efforts to protect human rights.”

Abdel Fattah el-Sisi, who became Egyptian president after a coup in 2013, has shown increasingly authoritarian tendencies over the last decade. Among other things, el-Sisi has argued that freedom of expression “stops” when it offends Islam and urged opposition movements to “look and listen” before they speak.

Dissidents fighting for civic rights, democracy and transparency face intimidation, threats and arbitrary detentions. Alaa Abd el-Fattah’s case represents the heartbreaking reality for thousands of political prisoners in el-Sisi’s Egypt. El-Sisi is a tyrant in the true meaning of the word and his rule has a detrimental impact on freedom of expression.