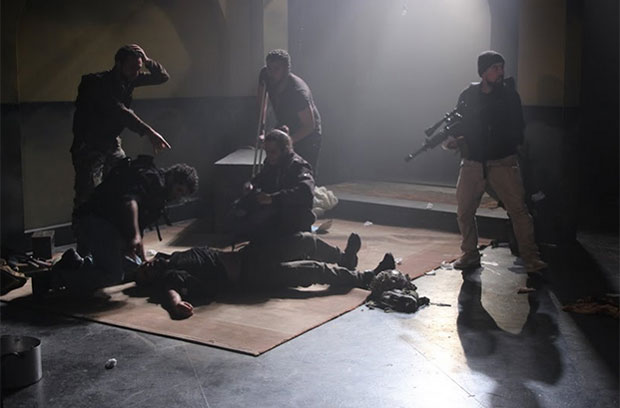 Throughout Index on Censorship’s Art and the Law information packs, the lawyers who wrote them stress that the packs offer guidance only and are not a substitute for legal advice. Knowing about the law helps an artist or an organisation identify when there could be a legal issue arising from an artwork. But each artwork is case specific so the advice is to contact a lawyer, if you are in doubt about whether or not you may be in breach of the law.

This short case study of the Palestinian Theatre Company’s first UK tour illustrates how the legality of The Siege was challenged in the media and how the touring venues responded to meet the challenge.

The show tells the story of the 2002 siege of the Church of the Nativity in Bethlehem, which was an international news story. The production illustrated the siege from the perspective of the Palestinian fighters who spent 39 days inside the church. The company researched the show by interviewing some of the fighters who are now living in exile in different countries.

In programming The Siege, Battersea Arts Centre (BAC) had anticipated that it and other participating venues might receive some critical feedback connected with the tour. Indeed, the 3 May 2015 Mail on Sunday contained an article with the headline: UK taxpayers fund ‘pro-terrorist’ play – £15,000 of public money given to show based on the words of Hamas killers. The Times of Israel also reported on the production with the strapline – “2002’s hostage standoff at Bethlehem’s Church of the Nativity gets historically questionable treatment in play set to tour England”

The BAC responded to the media reports. This is an excerpt from the briefing document:

In the Q&A mentioned above, one question raised a legal issue: Does this play glorify terrorism? It was also echoed in the media that alleged the play was “pro terrorist”.

Glorification of terrorism is a crime with serious consequences if convicted. While the guidance in our pack goes into some detail of defences for artists and arts organisation, it also stresses that the pack is not a substitute for legal advice. If you are unsure about your responsibilities under the law at any time, you must obtain independent specialist legal advice.

This was a sensible belt and braces approach because lawyers’ advice often varies according to interpretations of the law. Lawyers can only advise after all, so it was sensible to go three ways. All three gave advice pro-bono.

BAC created a summary statement from this advice and shared it with the other nine venues. They included a disclaimer that other venues used it at their own risk. It was advice, rather than a watertight guarantee that there couldn’t be other interpretations placed on the script. But it succeeded in its main purpose, which was to reassure the touring venues of their legal position, and enabled them to stand up to hostile press if necessary.

The Siege does not infringe Section 1 of the Terrorism Act 2006, which prohibits the encouragement or glorification of terrorism. The play focuses on the personal struggles of the Palestinian fighters on a human level in attempting to survive the siege. It does not encourage audience members to emulate their conduct. Although the play is likely to be interpreted as sympathetic to the fighters, the sympathy is based on their struggle to survive as people and not on any violent acts or participation in terrorist groups. Violence is at no point encouraged in the play.

The presentation of The Siege, which depicts real-life events expressly from the point of view of the Palestinian fighters, is covered by Article 10 of the Human Rights Act: the right to freedom of expression, including artistic expression. Since The Siege does not commit an offence under the Terrorism Act 2006, and therefore poses no reason for this freedom of expression to be curtailed, prohibiting the play would likely be a breach of Article 10.”

It was interesting to see the way that language was used in some of the reporting of The Siege. As well as raising the general temperature around the tour and adding to a sense of controversy, the use of legalistic language also introduced questions about the legal status of the show.

We felt that seeking legal advice would be useful to us in a number of ways: to inform our Q&As so that we could confidently answer any question that posed a direct legal challenge to the work; and to settle any anxiety that any staff or Trustees might understandably feel, to demonstrate that the artists and the organisation were on a solid legal footing.

This latter point was especially useful for Trustees who are one-step removed from the day-to-day and for good governance in these matters must be reassured that all risks have been assessed. Perhaps the most productive decision was made by all participating venues together: that we would support each other in the run-up to and during the tour, and work closely with the company at all times.

I know that we at Battersea Arts Centre learnt a lot from the great work of the Lowry and others. Providing each other with a support network ensured that we felt less isolated during stressful moments.”

A short survey was sent around to the venues on the tour asking if there were protests and about their contact with the police. The feedback was that the police were supportive and responsive and acted as useful liaisons between the venue and the protesters. Most venues informed the police of the forthcoming production about one week in advance. One venue approached the police a month in advance, but it seemed to “get lost in the system”. There were protests at many of the venues, but all were peaceful and took place without incident.